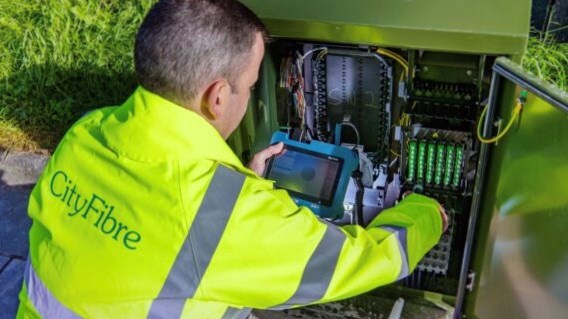 CityFibre has secured £1.125 billion in new funding to help it achieve its goal of passing 8 million UK premises with its fixed broadband access network and expand its horizons further.

The wholesale operator, which is building out its fibre access network in towns and cities across the UK and selling capacity to retail ISPs as part of its £4 billion Gigabit City Investment Programme, has raised £825 million in equity funding and, in the process, added sovereign investor Mubadala Investment Co. and investment group Interogo Holding as new minority equity stakeholders, joining Antin Infrastructure Partners and the Infrastructure business within Goldman Sachs Asset Management (Goldman Sachs), each of which previously owned a 35% slice each.

CityFibre has also arranged an additional £300 million line of credit with its banks, adding to the existing £820 million of available credit.

The capital raise had been signalled earlier this year by CityFibre’s long-serving CEO Greg Mesch and ended up being larger than expected.

“We’re thrilled to announce the completion of a £1.125 billion capital raise, the largest ever secured to support the UK’s Full Fibre future... This new capital will not only underpin our rollout to up to 8 million homes across 285 cities, towns and villages, but will also enable our participation in the Government’s ‘Project Gigabit’ programme to extend our future-proof infrastructure to rural areas and ensure no one is left behind,” stated Mesch.

He added: “This capital raise is proof of the benefits of a truly competitive infrastructure market, as envisaged by both Government and Ofcom. If nurtured and protected, infrastructure competition at scale will continue to unleash huge investment from the private sector as well as catalyse investment from incumbent operators. Ultimately though, it is residents, businesses and the UK economy that stand to benefit, with competition driving what has become the fastest rollout of Full Fibre in Europe.”

That may sound like typical CEO hyperbole, but Mesch is on the money (so to speak). That’s because it is CityFibre, which essentially took the risky move of going head-to-head with the incumbent (Openreach) when it announced its initial fibre rollout plans in 2014, that paved the way for dozens of others to invest in the UK fibre access infrastructure market in either a wholesale or retail role. (See The rise of the UK fibre broadband altnet.)

Seven years ago, no other company had the vision or determination to shake up the status quo, but CityFibre’s efforts arguably shook up the whole market, including Openreach, which at the time was showing no inclination at all to invest in new fibre infrastructure, but which now has plans to accelerate its FTTP push to 25 million premises by 2026, a plan that has attracted a major investor, Patrick Drahi, to invest in the UK national operator. (See Drahi’s Altice grabs 12.1% chunk of BT.)

So where is CityFibre now in terms of its roadmap? Its network is live in 46 locations, it has long-term network usage commitments from Vodafone, TalkTalk and Zen, a relationship with Three, service agreements with 24 regional ISPs and deals with 1,800 business service providers and resellers. And having started with a focus on urban areas outside of London, it is now also “exploring opportunities to participate in Building Digital UK’s (BDUK) ‘Project Gigabit’ rural programme”: That’s a tougher gig than building new infrastructure in urban areas but it gives CityFibre another opportunity to be the first to lay its cable in particular areas, a key factor for any fibre broadband operator (being the company that lays the second fibre is not a very viable strategy).

What will be interesting to watch is how consolidation impacts the UK fibre broadband sector: There’s little doubt that some of the smaller new entrants have been funded by investors hoping that the buzz in the market will lead to some quick M&A opportunities and swift profitable returns on their investments. With increasing scale on its side and fresh capital behind it, CityFibre could now advance its plans with some judicious acquisitions, but it will need to make sure it doesn’t become the catalyst for the creation of a British broadband oligopoly that would undo all the good work of the past few years. (See Memo to UK broadband sector – don’t screw up!)