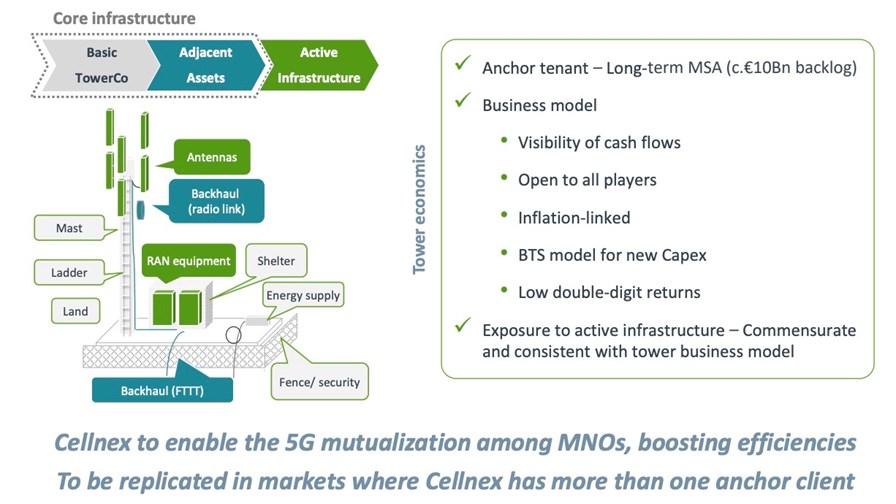 European neutral host giant Cellnex shifted up a strategic gear today with an acquisition of network assets in Poland that positions it as an ‘Augmented TowerCo’ that manages active network elements as well as passive infrastructure.

The new €1.6 billion deal to acquire Polkomtel Infrastruktura from Cyfrowy Polsat will add 7,000 tower sites plus a range of active infrastructure assets, including about 37,000 2G/3G/4G/5G radios, about 11,300km of fibre backbone and fibre backhaul connections plus microwave backhaul infrastructure across Poland.

The deal, its second major European acquisition in the past month, also includes a pledge to invest €600 million in 1,500 additional sites and active assets (mostly 5G) during the next 10 years.

The acquisition is significant for a number of reasons. First, it adds yet further scale to the company in terms of assets it can offer to all of Poland’s service providers and adds Polkomtel (which offers services under the Plus brand) as an anchor tenant.

It also adds to Cellnex’s position in Poland, as the company already struck a deal last year to acquire a majority stake in the company that will own and manage the 7,000 tower sites of Polish operator Play. Once both deals are closed, Cellnex will have more than 14,000 existing sites, supporting transport infrastructure, active network assets and plans to build more than 6,000 additional sites across the country. (See Cellnex to add Play's towers to its portfolio in €800M deal.)

The deal also adds to Cellnex’s overall European portfolio, which once all existing acquisitions are closed and planned new tower sites builds are complete, will total 128,000 sites (though its current number of operating sites is about half of this total – see details below).

Perhaps most significantly, the Polkomtel deal expands the role that Cellnex plays in Poland by including the management and operation of active as well as passive infrastructure.

Cellnex is already quite a diverse neutral host company, running broadcasting network infrastructure, subway networks, data centres and fibre networks in various markets, playing a role in what it calls “adjacent assets.” Adding active assets such as antennas and the radio access network (RAN) equipment to its list of managed infrastructure moves it into a role it calls ‘Augmented TowerCo,’ a role it plans to play in other European markets where it has more than one ‘anchor’ customer,

“Our expansion into active infrastructure is undoubtedly a qualitative leap and heralds a new reality for the company that broadens the development and growth options for Cellnex in Europe within telecommunications infrastructures,” noted Cellnex CEO Tobias Martinez.

It also brings additional complexity to the company’s operations and customer agreements, and sharing active assets, and having to rely on the capabilities and performance of vital service delivery infrastructure that is managed and updated by a third party, will certainly not be attractive to all.

But there seems little doubt there will be demand for such services as service providers seek to cut costs as traffic volumes continue to grow much faster than revenues. And Cyfrowy Polsat, which is selling the Polkomtel network assets but which will continue to run Plus as a major service provider in Poland, is clearly a fan of the model: "We believe active and passive network sharing is crucial for the provision of mobile connectivity in the future and mobile players have to follow this direction in order to provide high enduser experience," stated Maciej Stec, vice president responsible for strategy, Cyfrowy Polsat and Polkomtel.

But the company is quite clear, though, that it doesn’t intend to be anything other than a neutral host: Martinez stressed today during its earnings press conference that cellnex has no plans to acquire spectrum licenses and offer wholesale communications services – it is leaving that market to its service provider customers.

Its EBITDA (earnings before interest, tax, depreciation and amortization) almost doubled to €1.18 billion but various costs, including those related to its many acquisitions, pushed the company into a net loss of €133 million for the full year.

For the full details on Cellnex’s financial results, go to the company’s investor relations page.