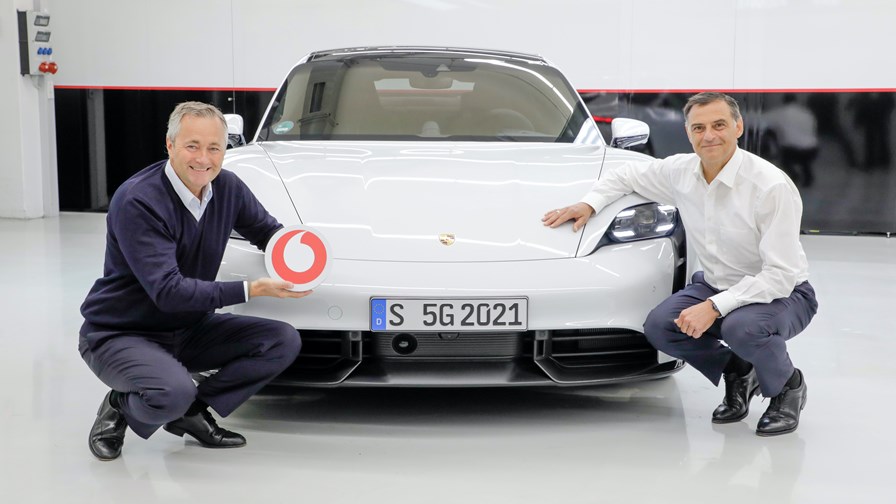 Porsche has switched on a private 5G standalone network at its Weissach site with the help of partner Vodafone Germany. The network is being used for the development of next-gen connected car systems and applications, such as pre-emptive warning and assistance systems and automated driving functions. “With 5G standalone we have brought Europe’s fastest network to Weissach, and therefore enable new digital services for the cars of tomorrow,” stated Vodafone Germany CEO Hannes Ametsreiter, pictured above (left) with Porsche Board Member for Development Michael Steiner. “5G is revolutionising the development of vehicles – from the first prototype to the finished series model. In future, Porsche engineers will be able to work on digital vehicle models and prepare them for use on the road. Starting in Weissach, 5G is moving directly into the cars on our roads,” added Ametsreiter. Also in Germany, Deutsche Telekom is working closely with BMW on 5G-enabled applications. Read more.

Telefónica has hired two investment banks to source a funding partner for the fibre access broadband rollout planned by UK operator Virgin Media O2, which Telefónica jointly owns with partner Liberty Global, according to Spanish digital newspaper El Confidencial (as reported by Reuters). The rollout is expected to cost between €4 billion and €5 billion. Virgin Media O2 announced in July its plans to have a full fibre access network by 2028, joining a growing number of companies that are investing in the UK’s fibre access plant. (See Memo to UK broadband sector – don’t screw up!)

Research house Dell’Oro Group has upped its forecast for expected investment in Open RAN technology, noting that the total spending in the 2020-2025 period (six years) could be anywhere between $10 billion and $15 billion (previously it had pegged the investment at $10 billion max). “The momentum with both commercial deployments and the broader Open RAN movement continued to improve during 1H21, bolstering the thesis that Open RAN is here to stay,” noted Stefan Pongratz, Vice President and analyst at Dell’Oro. “We are adjusting the forecast upward to reflect the higher baseline and the improved pipeline,” he added. The majority of that spending will come in the later years, though, with “Open RAN revenues expected to account for more than 10 percent of the overall RAN market by 2025, reflecting healthy traction in multiple regions with both basic and advanced radios.” To put the overall number in perspective, the total RAN market is expected to be worth $40 billion during 2021 alone.

Iliad, best known by its brand Free, is taking legal action to halt the use of Huawei 5G antennas by rivals Altice (SFR) and Bouygues Telecom, which were given permission by the French authorities to deploy the Chinese vendor’s gear, a decision that Iliad believes is unfair, reports L’Express.

When the Malaysian government announced a plan to build a wholesale 5G network early this year, there was a predictable sharp intake of breath from many in the global telecoms industry. After all, it had previously seen off a half-hearted proposal for a US 5G wholesale network from the Trump administration (see US proposes building its own nationalised 5G network as a barrier to China). However, Malaysia is pushing forward with its plans and in July it named Ericsson as the infrastructure supplier for the network ahead of Huawei, which had previously been seen as the front-runner.  As a concept, and at a time when many of the world’s MNOs are complaining about infrastructure costs and engaging in tower sell-offs and network sharing arrangements to make their 5G sums work out, a government-engineered wholesale network approach might seem like a reasonable option. It’s difficult to determine what proportion of the world’s big telecom vendors are against the idea (except for Ericsson, presumably) and we wonder how many telcos are against it on the basis that it won’t work... and, also, on the basis that it might. So the GSMA has just tiptoed gently into the firing line to ‘share’ some ‘recommendations’ on the formation of the Single Wholesale Network (SWN), a project Malaysians are calling the Digital Nasional Berhad (DNB). An outside consultancy, DT Economics, has been contracted to formulate a report and make recommendations. Essentially it recommends that the Malaysian government: Clarifies DNB’s mandate and regularly monitors its performance against its strategic objectives; introduces a fit-for-purpose wholesale regulatory regime at the same time as the DNB starts its commercial operations; and retains flexibility to allow alternative delivery options for 5G networks and services in Malaysia. In its press release, the GSMA says the report “examined the track record of SWNs in other markets around the world, uncovering evidence of failed deployments, slow rollout, poor service quality and profitability challenges.” So, while there’s a veneer of academic even-handedness behind the report, it’s fairly easy to spot where the consultants (and the GSMA) are coming from. For more, see GSMA shares recommendations for DNB, Malaysia’s single wholesale 5G network.