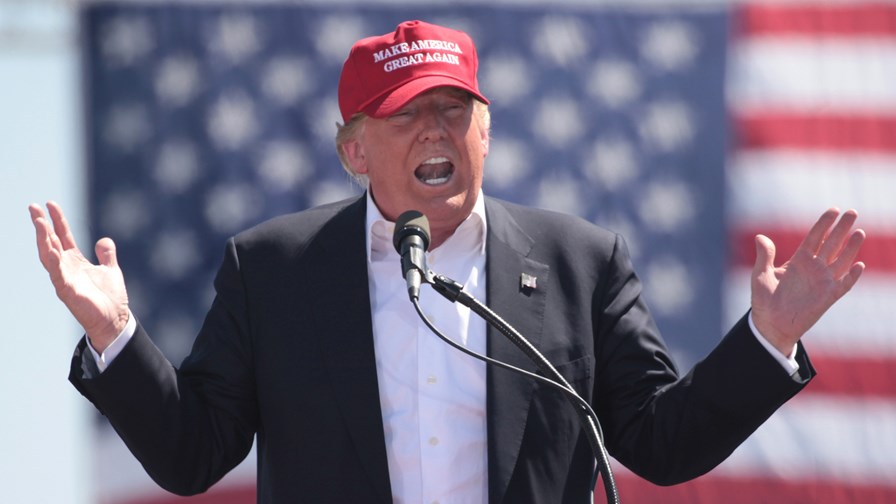 Don’t laugh, and it’s not (apparently) fake news, unfortunately. Yes, the US government is considering going all socialist and nationalising the emerging 5G industry. No, we are not making this up. Please remember, this is Trump’s America where anything could – and often does – happen.

Our outlandish tale begins with a news scoop from the well-respected Axios news site, which obtained a copy of a 6-page PowerPoint presentation and a 24-page memo document, both produced (according to Axios) by a senior National Security Council official, and which were presented recently to senior officials at other agencies in the Trump administration. You can (and should) read the full story here.

The presentation calls for the federal government to create a centralised nationwide 5G network within three years – the preferred option is for this to be bought and paid for by the government (i.e. nationalisation), but they are also looking at an option whereby wireless providers build competing 5G networks to the government’s specification. The reason for doing so, according to the leaked documents, is China. Apparently, “China has achieved a dominant position in the manufacture and operation of network infrastructure,” and “China is the dominant malicious actor in the Information Domain.” Also, China’s Belt and Road initiative is frightening the life out of parts of the US administration.

Reuters also quotes a “senior administration official” as “confirming the gist” of the report, and that the option was being debated at a low level in the government and was “six to eight months away from being considered by the president himself”. However, the unnamed official then demonstrates an alarming lack of understanding of telecoms and 5G when he or she then tells Reuters: “We want to build a network so the Chinese can’t listen to your calls. We have to have a secure network that doesn’t allow bad actors to get in. We also have to ensure the Chinese don’t take over the market and put every non-5G network out of business.”

The whole plan in the leaked report is so full of holes and lacking in credulity as to beggar belief, and will no doubt be picked apart and criticised in the days to come. But the gist of it can be summarised from this extract:

“This next generation technology, combined with a concerted effort by public and private entities, can position the United States to leap ahead of global competitors and provide the American people with a secure and reliable infrastructure to build the 21st century equivalent of the Eisenhower National Highway System – a single, inherently protected, information transportation superhighway.”

It believes that with strong and focused leadership from the Government, along with the collaboration of public and private companies, the US could “commit to building a secure 5G network within three years”. Yes, just three years to build whilst contending with huge political and economic fallout. So how would it do it? The preferred option in the report is for single network, ideally controlled by the state:

“If the US were to build and run one physical network using the Mid Band (3.7GHz to 4.2GHz) spectrum it could lease back to carriers to sell as a service…. In the single block scenario, the network could be built with security as a foundational element enabling the securing of both government and civilian data. The network could also be built for resiliency from physical attack or natural disasters.”

All of which begs the question: why? The report singles out Huawei as the big, bad enemy, which comes as no surprise given the recent allegations that the government persuaded AT&T to withdraw from a handset contract with the vendor. It alleges Huawei used “market distorting pricing and preferential financing” to dominate the global wireless infrastructure market, allegations that are certainly not new, and that the Chinese government was complicit in setting aside 70 per cent of its domestic market for Huawei and ZTE, thereby enabling them to effectively fund R&D through domestic sales. The report also notes that the FBI continues to monitor market activity associated with Huawei and ZTE.

“Much like concertina wire on a beach facing assault, or a city wall meant to keep out bandits, the case can be made that a nationwide secure network is required to create a defensive perimeter in the information domain.” Who needs to build a wall along the Mexico border if you can build a cyber wall instead?

“An attack on our citizens and companies should be met with a fierce response that forces the state actor in question to rethink the value of illicit activity in the Information domain,” states the document. “The network itself must be built with active defense in mind. As we learned in the wars in Iraq and Afghanistan the first step in asserting control over chaos is to take away anonymity. A network that identifies the adversary and responds to attack is fundamental requirement of the information age.”

The report notes, correctly, that US telecoms manufacturing has all but disappeared. It then asks and answer the following question: “Can we rebuild a telecommunications manufacturing base in the US? Equipment manufacturers have expressed a willingness to move manufacturing facilities to the United States in support of a 5G effort. This could be accomplished in time to allow for a three year deployment timeline.”

Of course, it might not be possible for the US to achieve this all by itself, and more to the point, it might want to use this expertise to reassert its global influence, especially in the face the China’s Belt and Road initiative. What we need is a new coalition of the willing.

“There are several countries out there that have expressed an interest in partnering with the United States on our 5G network… At the very least we can expect an interest in deploying a secure 5G network with equipment from a trusted supply chain…. This will allow for a counter to China’s economic model of using market dislocating principles to bind nations into their orbit in the information domain. It can be the foundation to a democratic counter to the Belt and Road Initiative. We can expect the long term effect to be a lessening of Huawei’s global market dominance.”

It continues: “If it were possible to assemble such a coalition, then we could grow our secure 5G networks in emerging markets… Eventually, this effort could help inoculate developing countries against Chinese neo-colonial behaviour.”

Quit whilst you are ahead

However, the report does occasionally go off on a tangent or two. For example, it says that whoever leads in technology and market share for 5G will be best placed to exploit massive IoT, machine learning and artificial intelligence. That’s quite a leap, from 5G to AI, and extremely spurious.

“China has assembled the basic components required for winning the Al arms race… Data is the oil of the 21st century and China has built the world’s first strategic reserve… Much like America’s success in the competition for nuclear weapons, China’s 21st Century Manhattan Project sets them on a path to getting there first… Building a nationwide secure 5G network sets the condition for future success in the information domain.”

It also has some interesting observations on spectrum. The report claims that “currently most equipment manufacturer work is being done in the High Band. In the US this is at 28GHz… Due to the inability to pass through human bodies, high band will have to be augmented with far more cell sites… The net result is that high band will lengthen deployment times. There are some who believe that for this reason alone, 5G will not be built in the US.” Extraordinary.

And what about standards and interoperability? It cites the new domestic first responder network as a key building block and model for the network. “First Net has already accomplished most of the work on their standards, and these could be repurposed and modified for a nationwide 5G network… The good news is that the industry group 3GPP has agreed on version 15 standards, which will be a good starting point for reaching consensus.”

But what's the cost? No exact figures, other than a vague line about how industry experts were “optimistic” about the ability to fund secure 5G rollout.

Is this for real?

Will the wireless carriers roll over and play ball? Will they stand aside, apologise to their shareholders, and allow the federal control of the lucrative 5G sector? We’re already seen the repatriation of tax revenues and more (costly) US high-tech manufacturing. How far can the President push US industry into seeing things his way? Will Trump see this as his legacy to America?

Getting the carriers to pool their work to create one network is practically unthinkable, given the amount of time and resources they have already invested in 5G. The ensuing turmoil would likely outweigh any gains and certainly not help towards meeting the proposal’s fanciful three-year timeframe. But then again, what about Google and the OTT companies, and how does this fit with the net neutrality arguments? Bizarrely, there could be some industry support for this – which is more than can be said for State support, where many states and individuals already loathe the “interference” of federal government.

There are more questions around the concept of a secure supply chain. This would obviously have to be a subset of the current supply chain, but the ecosystem for 5G and network components is already relatively small. Who will be considered safe and who not? And will there be sufficient “safe” companies for a complete supply chain? There certainly won’t be enough US manufacturers. And exactly what makes the resulting network any more secure than what the industry is already planning? 5G may well be a “network of virtual networks”, but the number of interconnect points to users and other networks will be huge – and how do you fully secure and protect all those? The planning of 5G architectures with security front and centre is already well underway – what other magical solution exists that could perform any better?

Whilst this draft proposal reads like unprecedented folly, the past 18 months or so has taught us not to dismiss such things – no matter how crazy and unlikely they would appear.

“The wireless industry agrees that winning the race to 5G is a national priority,” said Meredith Attwell Baker, CTIA President and CEO, for some reason stopping short of criticizing the report. “The government should pursue the free market policies that enabled the US wireless industry to win the race to 4G.”

The FCC chairman was not so reserved with his opinions. Trump-friendly Ajit Pai said: “I oppose any proposal for the federal government to build and operate a nationwide 5G network. Any federal effort to construct a nationalised 5G network would be a costly and counterproductive distraction from the policies we need to help the United States win the 5G future.”

“I’ve seen lead balloons tried in D.C. before but this is like a balloon made out of a Ford Pinto,” exclaimed FCC Commissioner Michael O’Rielly.