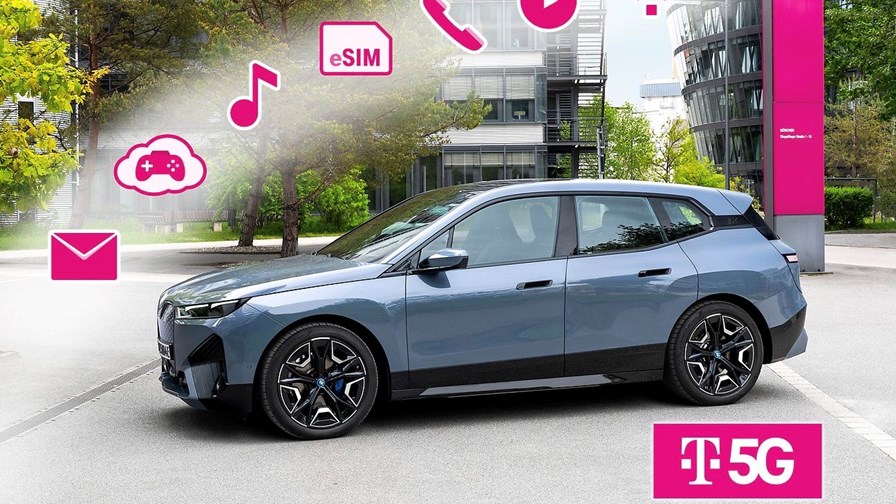 Germany’s 5G-enabled car and a kick in the bottom line for WhatsApp are on top of today’s new pile.

Deutsche Telekom and BMW have teamed up to offer a premium vehicle with full 5G connectivity that can be tied in with a customer’s existing 5G contract. The BMW iX (pictured above) can be turned into “another connected device for customers, just like a smartwatch.” Says the operator: “Deutsche Telekom and the BMW Group are using Personal eSIM and MobilityConnect to link vehicle connectivity with the customer's mobile network for the first time, and on a 5G basis. In addition, Deutsche Telekom customers can extend their existing mobile communications contract to their car for the first time.” Read more.

WhatsApp has been fined €225 million by the Irish Data Protection Commission for breaching data privacy rules, making it the second highest fine ever under the European Union’s GDPR rules, reports the BBC. And while that's a big fine, WhatsApp's parent, Facebook, can probably foot the bill...

Bemused head-scratching is probably the best reaction to the claim by Huawei board member Catherine Chen to The Guardian that US government, and other western, sanctions have galvanised the huge Chinese company into adopting the mentality of a startup. As if. The reality is that Huawei is one of the most centralised, bureaucratic, top-down, hierarchical of companies with alleged deep links to the ruling Communist Party of China and an assurance of state support should anything ever go badly financially awry. Accusations that the company’s infrastructure equipment may enable electronic surveillance and espionage by the Chinese government have persisted for years and the development of 5G networks resulted in the removal of Huawei equipment from networks in the US, the UK and many other countries while stringent trade sanctions were later imposed. Citing these as “political decisions” (which they certainly were), Ms Chen contends that these and other “challenges” have “re-ignited the passions of our over 190,000 employees.” (That’s quite a payroll for a start-up). This renewed burning ambition will ensure that Huawei will overcome all obstacles “by using its technical expertise to forge a path into new markets less dependent on the US,” so Afghanistan will probably get a visit from a sales team soon. Longer term, a golden future is assured because Huawei will diversify and find new revenue sources while its product range will be improved and expanded through innovation. Chen added: “With our smartphone business being affected, we can now focus on developing ever more devices being connected in the home and more widely.” Yup, here comes more facial recognition. Finally, she asserted, “I think most countries would choose to work with Huawei if they made decisions based solely on technological considerations.” And if wishes were horses, beggars would ride.

KPN will be deploying XGS-PON technology in its fixed fibre access broadband network from October, having conducted field trials of the 10 Gbit/s FTTX gear in its network during the summer, the operator has announced.

Developments in the supply chain: In the US, the powerful Consumer Brands Association (CBA) has just released an operational standard designed to enable shippers, carriers, logistics companies and retailers to implement contactless pickup and delivery workflows across their entire supply chains. The new contactless standard is interoperable and software-agnostic, providing a comprehensive set of data requirements for monitoring, recording and transmitting information about “core workflow events” such as driver check-in, proof of shipment and proof of delivery. The CBA developed the standard and piloted it with 60 shippers, carriers and retailers including giants such as Coca-Cola and Walmart. It was found that the digitisation of the pickup and delivery processes and cycles not only improved efficiency and speeded delivery but also eliminated two tons of paper records per annum at each facility using the new standard. That’s a few trees saved, unless of course the ones earmarked for paper production have been burned to charcoal in the continuing wildfires that are devastating so many US forests this summer.

If you thought that the end of the pandemic might mean international business travellers will be able to slip back to their old air-mile collecting ways, think again. You forgot about climate change. A Bloomberg survey of 45 large businesses in the US, Europe and Asia revealed that 84 per cent of them plan to spend less on travel once the pandemic is over (if that ever happens). Pressure to show willingness on cutting greenhouse gas emissions is a major force behind the expected ongoing cut-back, but the pain will be felt beyond the ranks of well-heeled business travellers. Bloomberg points out that expensive executive tickets had accounted for three-quarters of airlines’ pre-pandemic profits while accounting for only 12% of the seats, so the expected cutback in executive travelling will slash billions from airline revenues, cause ticket price increases for the rest of us back in coach, and inevitably a reduction in flight numbers. The good bit is that the pandemic has exposed the attractions and advantages of virtual meeting technology and observers think it’s a change that’s here to stay.