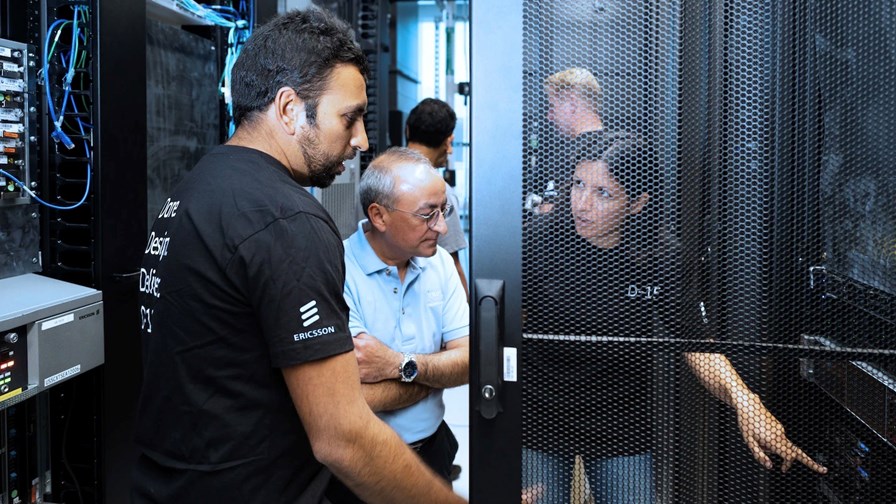 Personnel at the Ericsson-Intel Tech Hub in Santa Clara, California

Ericsson and Intel have announced the launch of a cloud RAN tech hub based in California. Rather disappointingly dubbed the Ericsson-Intel Tech Hub, the centre is already in operation and is focused on accelerating cloud RAN technology for improving energy efficiency and network performance, shortening time to market, and monetising new business opportunities. Plans for this year include the joint development of cloud RAN containerised network function (CNF) applications on upcoming generations of processing platforms, among other efforts. Commenting on the move, Ericsson’s Head of Product Area Networks, Per Narvinger, expressed belief that cloud RAN technologies and virtualisation have “enormous potential to impact networks of the future”. Dan Rodriguez, Corporate Vice President and General Manager of Network Platforms Group at Intel, concurred, adding that through the hub, the two companies will be able to showcase “how a virtualised RAN can deliver greater levels of automation, agility and sustainability.” Ericsson has been actively promoting cloud RAN as the principal stepping stone for operators looking to migrate away from traditional, integrated radio access network systems, announcing its ambitions and timeline for concrete steps in October 2020. (See Ericsson unveils Cloud RAN plans, a first small step towards disaggregation.)

EVP and CEO of Verizon Business, Tami Erwin, announced she’s leaving at the end of 2022 after 35 years in a number of roles at Verizon. In a lengthy LinkedIn post, Erwin, who discussed a range of industry topics during a TelecomTV interview during this year’s MWC22 event in Barcelona, didn’t give any reasons for her planned departure, although she noted the decision was taken “after much consideration”. “As I reflect on our amazing history, I am extremely proud to have contributed to what has become an iconic company with purpose, values and vision, a company committed to make the world in which we work better than it was yesterday. We’ve got a clear purpose and understand our responsibility to serve our employees, customers, shareholders and society at large”, she commented. While not disclosing what she plans next, Erwin suggested that “this isn’t the end of this story but rather another new chapter yet to be written.” Verizon has not published a statement about Erwin’s decision on its website. Rival US operator AT&T reacted to the news on Twitter, somewhat sarcastically asking Erwin if she needs “a new carrier”. Earlier this month Verizon Business used an event in London to present the company’s ambitions to be a major international private wireless networks provider with an upgrade of its 5G London Lab. (See Verizon to upgrade London 5G lab as it plots bigger private networks push.)

India could have a 6G network deployed using home-grown technology by the end of the current decade. At least this is the hope and ambitious plan of the nation’s Prime Minister Narendra Modi, who was cited by local media as saying that, by the end of 2030, India could launch 6G services, and that steps towards that goal have already been made in the shape of a dedicated task force working on the future networking technology. Modi has also reportedly highlighted the importance of quicker and more efficient technology, enabling accelerated development and boosting employment opportunities. His comments were made at a Telecom Regulatory Authority of India (TRAI) event today. Modi is clearly looking to further boost India’s potential as a mobile communications powerhouse that can develop its own technology and even become a global exporter by mentioning the ‘next G’, but he might want to focus on getting 5G up and running, and ensuring the country’s telecoms sector is geared up for healthy, long-term competition, before getting too excited about the introduction of 6G.

As part of a broader set of Trade and Technology Council (TTC) meeting agreements, the European Union and the US have agreed to take steps to lessen the impact of future chip supply shortages, the type of which have dogged thousands of companies across multiple vertical sectors, including telecoms, during the past couple of years. “The EU and US have agreed to develop a common early warning and monitoring mechanism on semiconductor value chains, to increase awareness of and preparedness for supply disruptions, and information exchange to avoid a subsidy race,” the EU noted in this announcement. “A dedicated taskforce on public financing for secure and resilient digital infrastructure in third countries shall also pave the way to joint US-EU public financing of digital projects in third-countries, based on a set of common overarching principles,” it added. The EU and US had already been working on such collaborative measures, but the EU noted that “with global supply chains further challenged by the Russian aggression against Ukraine, both parties agreed that close cooperation to advance the resilience of supply chains is more important than ever.” Read more.