What’s up with… AT&T, Intel, Microsoft, Rakuten Symphony and Qualcomm 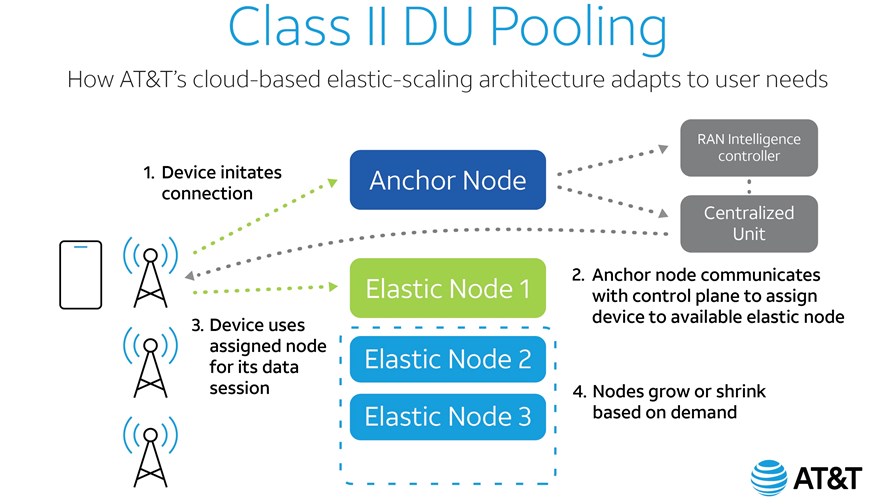 Major RAN and private network news from AT&T and a 5G massive MIMO team-up between Qualcomm and Rakuten Mobile/Symphony lead the way in this pre-MWC22 news roundup.

AT&T has been busy… It has been working with Intel on the “challenge of elasticity in the RAN” with the target of freeing “5G radios from the limitations of dedicated base stations,” and together they have developed “new cutting edge technology - we call it Advanced DU [distributed unit] pooling and it’s designed to deliver unprecedented levels of elasticity in the RAN. It will eventually be usable by the entire 5G operator community to drive the telecom industry’s goals of green and efficient wireless networks forward,” notes the operator in this announcement.

Meanwhile, AT&T has been working with Microsoft Azure on a service called AT&T Private 5G Edge that allows users to “roam beyond the geographical boundaries of the AT&T private network and still stay connected through the AT&T public network. The service, still under development, “is using Azure private MEC [edge computing] to help deploy these private wireless networks rapidly across radio spectrums, including CBRS,” notes AT&T, which is working on use cases with enterprises from multiple verticals. Read more.

Rakuten Mobile and Qualcomm Technologies are to jointly to develop a “next-generation 5G Radio Unit (RU) with Massive MIMO capabilities and distributed units (DUs)” that will then be taken to the global market by Rakuten Symphony as part of its recently-announced Symworld portfolio of Open RAN products. "Rakuten Symphony is passionately committed to enabling the transformation of mobile networks for the digital-centric future and we are honored to have our group’s opportunity to collaborate with global technology leaders such as Qualcomm Technologies to achieve this goal," said Tareq Amin, chief executive officer, Rakuten Symphony, Inc. "The new RUs and DUs developed with the support of Qualcomm Technologies aim to offer mobile operators and other organizations a dynamic and cost-effective way to deploy high-performance, virtualized 5G networks through the adoption of O-RAN-compliant software and infrastructure." Read more.

As tensions between Russia and Ukraine reached a critical and concerning level, with BBC News and many other international media reporting of Russian  military operations on its southern neighbouring country from early morning today, semiconductor companies said they expect limited disruption in the supply chain for now, Reuters reported. The chipmakers are apparently not too concerned as they had diversified supply chains and built up raw material reserves. Others are reportedly exploring ways to use alternative sources for chip materials. However, some industry experts point to a longer-term impact from the conflict. Citing market research company Techcet, Reuters said that Ukraine supplies more than 90% of the US's supplies of neon needed for lasers used in producing chips, while 35% of the palladium, used in sensors and memory, in the US comes from Russia. The two materials are said to already be in short supply and further tension between the two nations could lead to higher chip prices, according to an anonymous source from the Japanese chip sector, cited by the news agency. Read more here.

América Móvil has reportedly launched 5G services in 18 cities across its home market of Mexico. Local media Mexico News Daily said the largest operator in the country intends to cover a total of 120 cities by the year-end with the technology. For the purpose, it plans to set aside $1.8 billion in a move that is tipped to be the biggest rollout of 5G in Mexico by far. There are already 1 million 5G-compatible handsets in the nation, according to company executives cited by the media outlet. Its CEO, Daniel Hajj Aboumrad, reportedly noted that Mexicans were now spending more money on advanced phones as they have become more affordable in comparison with pricing of devices when 4G and 4.5G services were launched. You can find out more about the rollout plans by the operator here. One of its main domestic rivals, AT&T Mexico, launched 5G in December 2021. See more in its announcement here (in Spanish).

Vodafone, which has more than 66 million mobile contract customers across Europe and more than 188 million mobile users across Africa (including Safaricom), has announced a significant initiative to “extend the life of new mobile phones and encourage customers to trade in or recycle their old devices, helping the mobile industry move towards a more ‘circular economy’ that minimises waste and further reduces carbon emissions.” Starting in European markets in the next few months, Vodafone customers will be “offered a comprehensive and convenient suite of services, including insurance, support and repairs for their devices. Vodafone will launch a new digital platform making it straightforward for customers to agree trade-in options for their existing phones. Vodafone will also encourage customers to return any mobile devices that are at the end of their ability to function, and, wherever possible, will ensure that they are recycled responsibly or repurposed for social or charitable causes. In addition, Vodafone will begin to offer a wider range of high-quality, competitively priced refurbished smartphones at retail,” and has brokered a partnership with Recommerce to enable that initiative. Alex Froment-Curtil, Vodafone Group Chief Commercial Officer, noted: “Vodafone has a leading role to play in developing and driving a circular economy for mobile devices that significantly reduces their impact on the environment.  We are pioneering a comprehensive, digital offering that makes it easier for our customers to extend the life of their current smartphone, or to buy and own a refurbished device.” Read more.

The radio access network (RAN) equipment market grew by more than 10% in 2021 to top $40 billion and, once final numbers are collated, even inch towards $45 billion, according to research house Dell’Oro Group. The still massive investments in China mean Huaweiis still the global leader in terms of market share, followed by Ericsson, Nokia, ZTE and Samsung. And it doesn’t stop there: The market is set to grow by about 5% in 2022, according to Dell’Oro’s predictions. Read more.

Hardly a day goes by without further speculation about the potential financial or strategic moves being considered by Italian national operator TIM (Telecom Italia). The latest is that it is mulling the sale of its 15.4% stake in towers firm INWIT to French investment fund Ardian, which already owns a 15% chunk of INWIT, in order to raise €1.3 billion, reports Reuters. Next week, new CEO Pietro Labriola is set to present his new strategy to the board, one that should provide an alternative to accepting the €10.8 billion takeover offer from private equity firm KKR that has been on the table since last November.