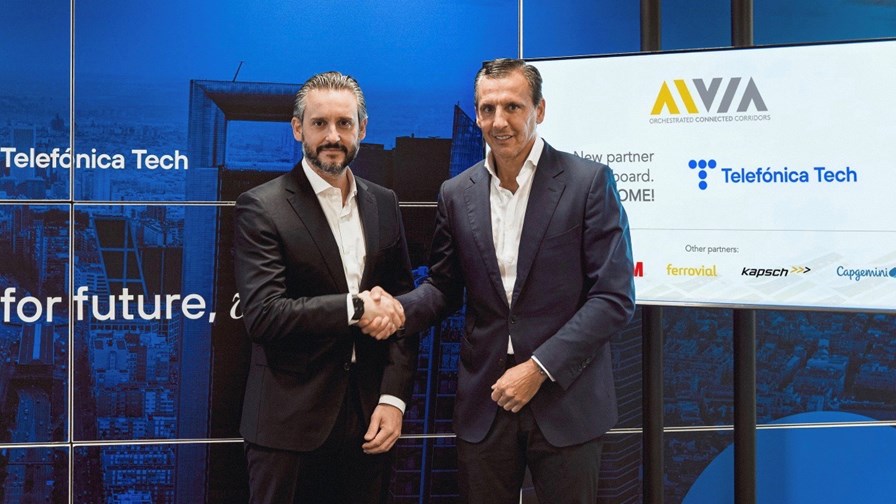 An important 5G application initiative, M&A chatter, some transport network advances and some virtualized routing action are at the top of today’s news pile.

Telefónica Tech has signed up to be part of AIVIA Orchestrated Connected Corridors, “an initiative to develop 5G smart roads and advanced monitoring, sensing and simulation technology.” Joining existing participants Microsoft, 3M, Kapsch TrafficCom and Capgemini, Telefónica Tech will join an alliance that “reinforces even more our positioning with connected mobility, being one of the keys to the future, as it allows a large amount of anonymised data to be obtained and processed [and] analysed with advanced technology [to] provide very valuable information for business decision making,” stated Jose Cerdán, CEO of Telefónica Tech, in this announcement.

Europe’s larger operators appear keen to talk about potential M&A activity currently... is something brewing? Earlier in the week we had Vodafone CEO Nick Read hinting at “in-market consolidation,” with the UK called out and Spain assumed, and now Orange CFO Ramon Fernandez has been talking, at this week’s Morgan Stanley TMT conference, about how consolidation in France is a near certainty, especially once both Altice and Iliad are private companies. “I’m not saying that we are now on the verge of seeing something happening in France. But when the time will come, and inevitably it will come, it will be easier for these players to engage into discussions,” he said, according to this Reuters report.

Orange has completed a field trial with Nokia, using the vendor’s latest coherent optics tech, that enabled a transport network capacity increase that supported end-to-end 400 Gbit/s services on its network and provides the ability to scale up to 600 Gbit/s. “This represents an increase in spectral efficiency by 50% compared to prior technologies on its long distance network,” noted the operator. The trial was run over a 914 km network link between Paris and Biarritz, “under challenging  live network conditions. The fiber network consisted of 13 spans of Orange’s existing network, through multiple cascaded reconfigurable optical add/drop multiplexers (ROADMs), using 100GHz WDM spectrum channels.” Read more.

Virtualized router specialist DriveNets says it has completed a successful trial with South Korean operator LG U+. “In this effort, LG U+ led the first successful validation of cloud-native, backbone packet-forwarding transmission in South Korea. This successful POC trial is the latest step in LG U+’s evolution towards a fully cloud-native, disaggregated network,” noted DriveNets in this announcement.

Cisco reported an 8% year-on-year increase in sales to $12.9 billion for its fiscal first quarter and guided for a full year increase in revenues of between 5% and 7%. "In Q1, we had robust growth and continued strong demand despite the very dynamic supply environment," said Chuck Robbins, Chair and CEO of Cisco. "Cisco's technology sits at the heart of the accelerated digital transformation happening today. Our breakthrough innovation, strong demand, and the success of our business transformation position us well for another year of growth in fiscal 2022." Read more.

Colt is leading a consortium of companies, including Open RAN expert Airspan Networks and analytics specialist Accedian, that has launched a 5G private network pilot in the PB5 La Défense building in Paris that aims to understand and unlock “the benefits of 5G for business verticals such as real estate, construction, retail and healthcare.” Read more.

AT&T and Microsoft Azure have further strengthened their relationship with the launch of the “Private Preview” of Azure Edge Zone in Atlanta “to help companies multiply the power of 5G by combining it with cloud computing.” The zone combines AT&T Network Edge (ANE) capabilities with the Microsoft Azure cloud platform. Read more.

Canadian operator Rogers Communications is in turmoil... The CEO, Joe Natale, has been booted out and replaced with an interim chief by the company’s Chairman, Edward Rogers, but the move is not supported by other members of his family, who are also on the board. What a mess! Read more.

Brightspeed, a new US broadband network operator owned by infrastructure investorApollo Global Management, which is in the process of acquiring access infrastructure assets from Lumen (formerly Centurylink) in a deal valued at $7.5 billion, has unveiled its plans to invest $2 billion “to build a network that will bring faster, more reliable Internet and Wi-Fi to communities throughout the Midwest, Southeast, and certain parts of Pennsylvania and New Jersey.” Read more.