US cities seek a slice of 5G revenue 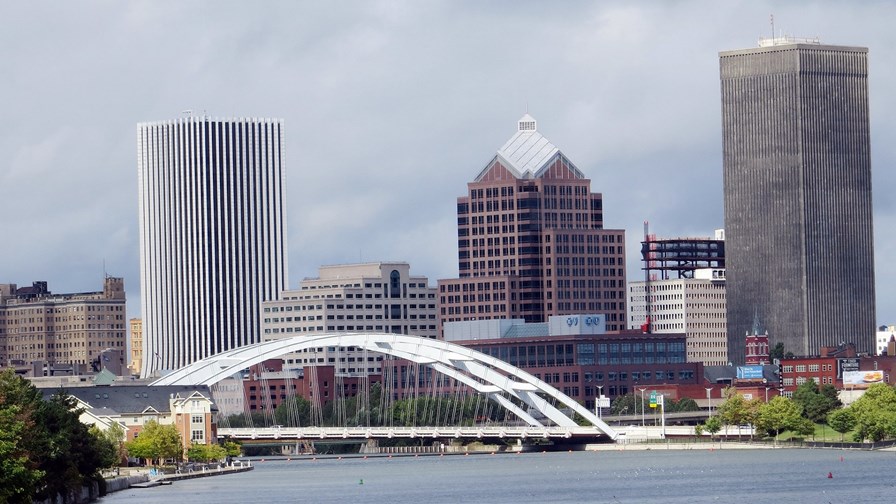 There has always been a certain amount of NIMBYism with regard to the installation of mobile masts and with 5G requiring denser networks it is likely to be an ongoing problem for operators. Indeed, as Verizon's recent experience shows, you can deploy 5G small cells in middle America's backyard, but the lack of consistency in the way towns and cities handle rollouts will keep telcos on their toes.

Last week Verizon filed a lawsuit against the city of Rochester, in upstate New York, accusing it of overcharging for the installation of 5G network equipment, amongst other things.

The telco claims that Rochester's actions amount to "an effective prohibition on Verizon Wireless's ability to provide telecommunications services in the affected area of the city," impacting on its competitiveness, impeding it from making full use of its licences and business investments, and "irretrievably impairing [its] good will and business reputation."

Cutting to the chase, the case hinges on rules set out by the FCC last year designed to smooth the regulatory path for telcos looking to deploy 5G infrastructure – it focuses mainly on the fees local authorities are able to charge telcos for permits to deploy small wireless facilities – and the subsequent introduction of a new telecommunications code by the city of Rochester earlier this year.

Essentially, Verizon claims that Rochester is charging through the nose for the rollout of 5G small cells and is breaking the law in doing so.

The numbers shared by the telco in the lawsuit, filed with the District Court for the Western District of New York, clearly illustrate why it believes Rochester is overstepping the mark.

Rochester's new code states that telcos will be charged an annual fee of US$500 per standard pole attachment or $1,000 per smart pole, while the FCC's rules stipulate that such recurring fees should be capped at a maximum of $270 per small wireless facility, including all right-of-way access fees and fees for attachment to municipally-owned structures.

The telco also claims that Rochester's underground and aerial installation fees for backhaul "are not cost-based, are unreasonably high, and are discriminatory," and shares a raft of figures to prove its point (see: Cellco Partnership d/b/a Verizon Wireless v. City of Rochester, case number 6:19-cv-06583).

The FCC limits state and local governments to charging fees "that are no greater than a reasonable approximation of objectively reasonable costs for processing applications and for managing deployments in the rights-of-way," the regulator stated in September. It makes provision for localities to charge higher fees, should their costs dictate it, but according to Verizon stipulates that there are "only very limited circumstances" in which this would apply.

Verizon requested that Rochester justify its rates, but "the city did not provide any substantiation based on costs," it says

"Over the next three to four years, an estimated 300,000 small wireless facilities will need to be deployed by Verizon Wireless and other providers, and connected to other wireless network infrastructure, which is approximately double the number of 'macro cells' built over the last 30 years to support 4G and other prior generations of wireless technology," Verizon said. As a result, per-site fees take on greater importance and can "materially inhibit service" if they do not reflect the actual costs faced by local government, it added.

Even at $270 per site, as mandated by the FCC, that's a hefty cost for telcos: over $80 million for recurring annual fees alone, and that's excluding the possibility of legitimate additional costs that may need to be accounted for.

But while telcos are under pressure to keep down the cost of rolling out 5G, local governments understandably want to secure a slice of 5G revenue, aside from the oft-promised but nebulous "business benefits" and "boost to the local economy" that we're told the technology will bring. And some have already come under fire for failing to extract their pound of flesh from the telco community.

Earlier this year Verizon brokered a 5G deal with Syracuse, less than 100 miles west of Rochester, that will enable it to install 600 small cells on the city's streetlights over a six-year period.

According to local news outlet Syracuse.com, the city had written a policy that would have seen telcos billed $950 for installing a small cell tower, but was forced to repeal it following the FCC ruling. The city will charge Verizon the top limit of $270 per tower, plus a $500 small cell application fee that covers up to five poles, it said, amounting to around $162,000 per year in recurring revenue plus $300,000 in application fees. A rollout of the same scale in Rochester would be at least double that, based on annual pole attachment fees as they currently stand, but the town could find it difficult to prove that its rates are cost-based, particularly in light of the change of stance in Syracuse.

Local commentators have complained that in its hurry to become one of the first towns in America to have widespread 5G connectivity, Syracuse gave more ground than it needed to to Verizon, both in financial and planning terms. Reactions in the local press show residents insisting that they are perfectly happy with 4G, believe they don't use their phones enough to justify the additional infrastructure in their town, and/or are not interested in HD gaming...which remains one of the few applications many consumers can envision 5G being a requirement for. Meanwhile, concerns remain that the 5G rollout could mirror previous technology upgrades in the town, with the more affluent areas gaining connectivity while others are left behind, although Verizon naturally insists that this will not be the case.

It's a tricky balance for telcos, and something they will have to commit a significant amount of internal resource – mainly people power – to maintaining.

And while some countries are less stringent than the US on the usage of street furniture for mobile and related planning issues, others have tighter rules and more regulatory hoops. It's a cliché, but it seems valid here: while we are constantly being bombarded with promises over the potential of 5G, the lawyers could end up with a big slice of the financial opportunity, in the short term, at least.