The fix is in: Ofcom imposes 5G auction spectrum caps but still can’t satisfy all operators 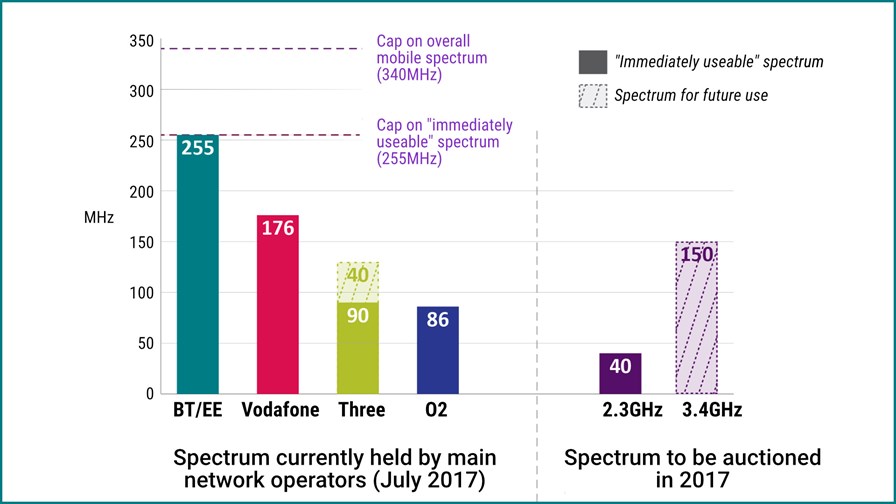 Oh dear Ofcom, what have you done? The UK telecoms regulator has published its rules for the upcoming 5G-led spectrum auction and has set out stringent conditions that it intends will “safeguard competition over the coming years.” We are under no doubts whatsoever of Ofcom’s probity and professionalism, but not all of the UK’s mobile operators are happy with the restrictions, describing them as “a kick in the teeth”. But not because of the presence of caps per se, but rather that they don’t go far enough. The regulator’s life is not an easy one.

The issue is around spectrum caps, which Ofcom has put in place “to reflect recent market developments and safeguard competition over the coming years”. There will be two different restrictions on bidders: a limit to the amount of spectrum operators can win in the 2.3GHz band; and an overall limit on the spectrum an operator can win across both bands.

There will be a cap of 255MHz on the “immediately useable” spectrum that any one operator can hold after the auction, so this rules out BT/EE from being able to bid for spectrum in the 2.3GHz band as it has already reached this limit.

The additional cap of 340MHz on the overall amount of mobile spectrum a single operator can hold amounts to 37 per cent of all spectrum expected to be useable in 2020 – which therefore includes the 80MHz in the 700MHz band expected to be auctioned in three years’ time. This means BT/EE can only win a maximum 85MHz of new spectrum in the 3.4GHz band, and also means that Vodafone could only gain a maximum 160MHz across both bands. Other bidders, including incumbents O2 and Three, have no restrictions whatsoever, as their current holdings are much lower.

“Spectrum is a vital resource that fuels the UK’s economy,” said Philip Marnick, Ofcom’s Spectrum Group Director. “We’ve designed this auction to ensure that people and businesses continue to benefit from strong competition for mobile services. We want to see this spectrum in use as soon as possible.”

As Ofcom rightly notes, after acquiring UK Broadband in February, Three now has access to 40MHz of mobile spectrum in the 3.4GHz band, plus 84MHz in the 3.6 to 3.8GHz band. It also has – along with Vodafone – 20MHz of spectrum in the 1400MHz band, acquired from Qualcomm in 2015. But the operator is not happy.

“Ofcom’s proposal is a kick in the teeth for all consumers and in particular for the near-200,000 people who signed up to the 'Make the Air Fair' campaign,” said Dave Dyson, Chief Executive of Three UK. “By making decisions that increase the dominance of the largest operators, Ofcom is damaging competition, restricting choice and pushing prices up for the very consumers that it is meant to protect. The mobile market is imbalanced and failing customers. Ofcom has shown little interest in tackling the problem. We will consider our response as a matter of urgency.”

That’s right, Three had demanded more stringent restrictions to prevent the Big Two from increasing (or even maintaining) the spectrum holding advantage. It is even reported that Li Ka-shing, the billionaire owner of Three (via Hutchison), raised the issue with the UK Prime Minister during his recent visit, leveraging his position in a post-Brexit trading world as one of the UK’s biggest foreign investors – and therefore someone, presumably, not to antagonise. Although Mrs May apparently wasn’t buying it, and bounced him back to Ofcom.

Three’s competitors aren’t too impressed either. An off the record conversation with TelecomTV highlighted Three’s recent announcement of its “video binge watching” tariff as proof that he operator already has plenty of spectrum available to use, thank you very much. What’s actually happening, say our sources, is an attempt by Three to delay the auction so it can use its existing 3.6GHz spectrum for pre-5G services ahead of its competitors.

For its part, O2, whose proposed merger with Three was blocked by the UK courts last year, is keeping quiet and appears to have begrudgingly accepted the auction rules. It doesn’t have a billionaire owner who can wine and dine with the Prime Minister, just a parent operating group that apparently can’t decide if it wants to keep O2 or sell it off (rumours of a blocked management buyout are still floating around).

What about high frequency spectrum?

Meanwhile, operators shouldn’t expect too much more spectrum being made available in the short term. Ofcom says that it had expected that an additional frequency band for 5G – the 3.6GHz to 3.8GHz band – was going to be available at around the same time as the 3.4GHz band becomes useable for mobile. It now has “less confidence that it will be useable nationwide” by that time. Surprise, surprise, Three is one of the current holders of a licence in this band, via UK Broadband, along with users of satellite earth stations and other fixed links. No wonder Ofcom is now less confident.

Therefore, releasing this new band cannot be relied upon to tackle competition concerns post-2020, hence the overall spectrum cap on this forthcoming auction. It still intends to make the 3.6 to 3.8GHz band available as soon as possible, but not for some years.

Ofcom says it has been working closely with other European spectrum regulators to identify bands that have the potential to be globally harmonised. This has resulted in the identification of three bands to enable 5G in Europe:

Back in February this year, Ofcom announced that has started a programme of work to look at how the 26GHz band can be made available for 5G in the UK, and that it intended to publish a consultation on this shortly. Although we are still waiting, and the fact that an EC report on the technical conditions and band plan won’t be published until June 2018 suggests that “shortly” is a relative term.

Ofcom had also intended to publish a consultation on the 26GHz band “in the first half of 2017”. Again, still waiting. As for the other numerous higher frequency band contenders, evaluation work continues, but expect anything here for many years.

In the meantime, any dreams of the UK economy being led by 5G in the short term are fading fast.