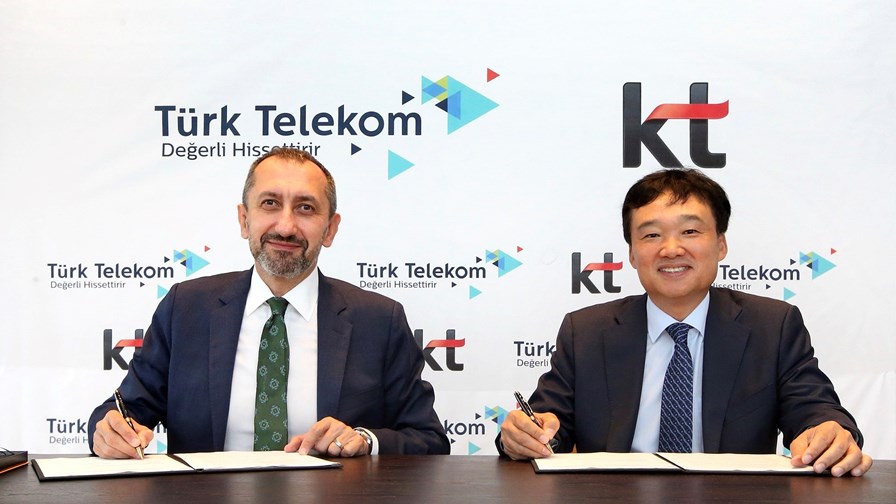 Türk Telekom CEO Ümit Önal (on the left) and Kyungrim Yoon, Head of Digital Transformation Division at Korea Telecom (on the right)

Türk Telekom and Korea Telecom (KT) have joined forces to conduct 5G research and development (R&D), co-invest in tech startups and potentially exchange media content, as they look to strengthen their long-standing ties.

As part of the agreement, they will carry out studies on next-generation technology and explore options to commercialise projects based on it.

Türk Telekom explained that the duo will aim to discover new technology startups and co-invest in their solutions.

The deal will also see KT provide content to Türk Telekom’s IPTV/OTT platform, with the potential for this to expand to exchanging content in the near future.

“We are starting an exciting journey with Korea Telecom, the world’s leading technology company, to implement joint R&D projects in the field of 5G, to invest in startups, which is an area we value very much, and to exchange content for our TV platform. I believe that this cooperation will yield very successful results,” said Türk Telekom CEO Ümit Önal (pictured, left).

Kyungrim Yoon, head of the digital transformation division at Korea Telecom Group (pictured, right), added that the two companies will “do our best to achieve successful results through active cooperation based on the strategic partnership between the two countries”.

In fact, this partnership between the nations has been in place for a number of years; among the most notable steps is a free trade deal that was signed in 2013.

According to The Korea Herald, KT has also agreed to provide its private network technology as a basis for a private 5G networking service scheduled for launch by Türk Telekom in 2023, which will target enterprise and government customers.

The formal agreement builds upon a preliminary cooperation deal sealed between Türk Telekom and KT at the Mobile World Congress (MWC), which was held in Barcelona earlier this year.

The partnership between the two companies reportedly goes back to 2016 when local media suggested Korea Telecom had agreed to export its GiGa LTE technology (an evolution of 4G that is considered the core technology of 5G) to Türk Telekom, and reportedly it was then that the South Korean operator first expressed a desire to cooperate with the Turkish telco on 5G service development.

KT has a lot of knowledge that it can pass on to Türk Telekom, especially when it comes to 5G given that, in April 2019, the operator claimed to be the first in the world to launch a commercial 5G network. Additionally, in terms of 5G deployment, South Korea has one of the highest levels of coverage, alongside China and the US. Meanwhile, Turkey is to complete a 5G auction this year, with the first commercial services expected in 2023, as outlined by the country’s deputy minister of transport and infrastructure, Ömer Fatih Sayan.