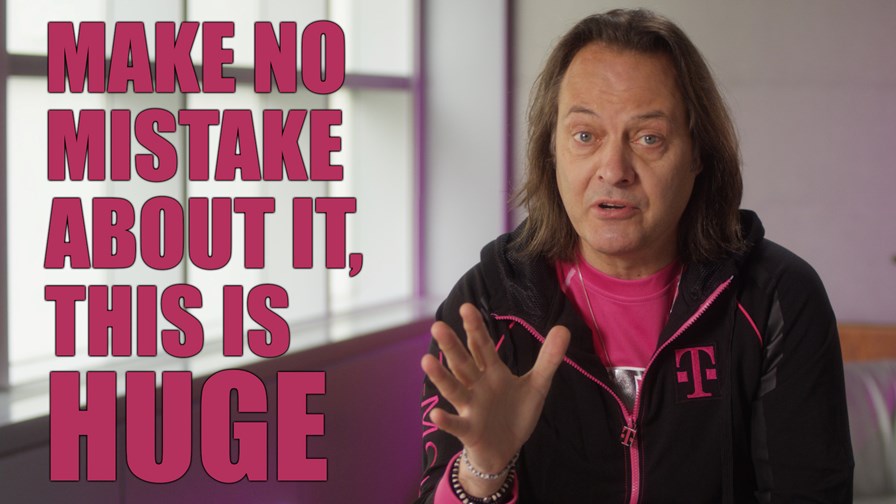 Who’d have thought it? John Legere, the voice of reason? Never one to pass up the opportunity for some self-aggrandising rhetoric, telecoms’ consummate showman has been out hyperbole-d and has turned the tables on AT&T.

Such was the scale and audacity of AT&T’s so-called 5G announcement last week, that it wasn’t just the technology and business media that were left speechless and dumbfounded. It took T-Mobile president and CEO John Legere several days to get over the shock and make a counter-statement on 5G and then when he did, he gave an uncharacteristically understated performance. Okay, so he still wore his trademark full-on branded leisure wear, which makes him look a little like a faded ‘70s popstar who now has to tour retirement communities and bingo halls, but that’s just who he is, so we’ll skip the sartorial analysis.

“AT&T announced eight ‘5G Evolution’ cities that will get, at some point this year, what are basically LTE technologies that we launched in 2016,” said Legere in a video announcement. “Media called it ‘bullshit’ and ‘fake’ and ‘ruining 5G’. For once, I didn’t have to say it, and I agree wholeheartedly, especially with the bullshit part.”

Legere was critical of AT&T and Verizon’s strategy of targeting 5G for so-called fixed wireless access, and adopting a deployment plan of creating a series of hotspots in select cities . “The carriers are using 5G to either distract from how badly they’re losing today or to give their shareholders some hope they can compete with Big Cable,” he said. “Their ambitious vision for Fixed 5G to replace home internet will never provide mobile 5G coverage. It makes no sense. 5G will be amazing, and we can’t even imagine all the cool stuff it will bring, just like with our earlier network innovations. That’s why truly mobile 5G has to be nationwide – period, the end.”

Neville Ray, T-Mobile’s Chief Technology Officer, added to the rebuke towards AT&T, saying that all they announced were LTE technologies that T-Mobile launched in 2016. He also reiterated that 5G can be deployed on any frequency, and that it isn’t just about fast speeds. He then went into some detail about his 5G plans.

“First, we are going to dedicate part of the new 600MHz spectrum we just won to LTE and then part to 5G nationwide,” explained Ray. “This means T-Mobile is the first company to commit to building a nationwide 5G network. And that’s nationwide mobile 5G, not fixed 5G. In addition to the 600MHz band, we have 200MHz of spectrum in the 2.8GHz and 3.9GHz bands covering nearly 100 million people in major metropolitan areas and an impressive volume of mid-band spectrum to deploy 5G in as well.”

“As 5G standards are defined, chipsets are delivered, and equipment comes to market, we expect to be 3GPP certified and be able deploy 5G on clean spectrum – without any re-farming dependency – which means we can light it up and roll it out quickly,” he added.  “We’ll expect all this to begin in 2019 and target 2020 for a full nationwide rollout.”

T-Mobile’s major vendor partners also lined up to give their support to the telco’s plans.

“The 600MHz spectrum will allow 5G to be deployed nationwide, bringing the ultimate experiences to T-Mobile’s enterprise customers and consumers throughout the United States,” said Borje Ekholm, President and CEO, Ericsson. “We will support T-Mobile US with 5G radio development for this spectrum. Commercial availability of the product will be aligned with 3GPP standardization and ecosystem support.”

“Nokia is proud of its 20-year history of working alongside T-Mobile to build their next generation networks,” said Rajeev Suri, CEO of Nokia. “With its future network plans to pursue Mobile 5G on 600MHz, we stand ready to take T-Mobile into the next decade.”

“Make no mistake about it, this is huge,” said Legere. “Unlike the other guys, I’m not claiming this is right around the corner this year or next. But it will be here in the next two to three years.”