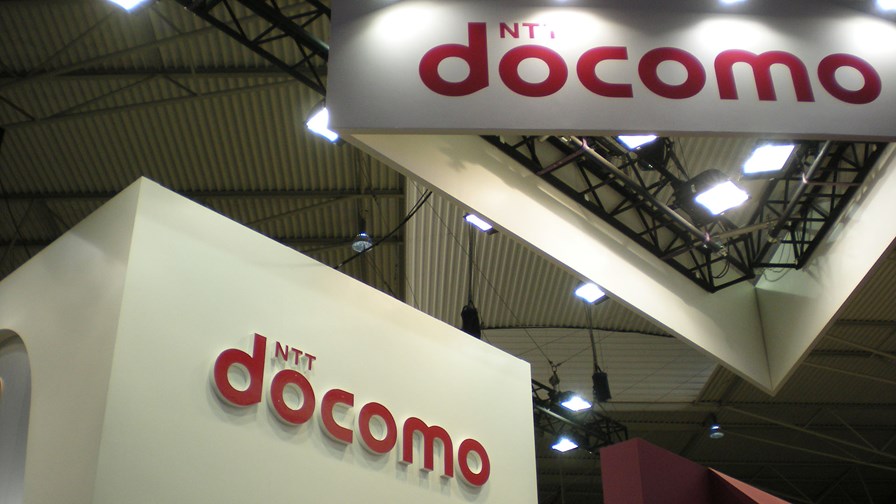 Japan’s NTT DoCoMo has today announced plans for major 5G experimental trials with six of the industry’s leading equipment vendors. Alcatel-Lucent, Ericsson, Fujitsu, NEC, Nokia and Samsung will collaborate with the mobile operator to confirm the potential of 5G mobile technologies at frequency bands above 6GHz. The aim is to test new radio technologies to support diverse types of applications, including M2M, in very high capacity scenarios.

Each vendor will partner with DoCoMo on a specific trial as part of an overall proof of concept, each running in parallel, with other vendors likely to be announced in the future.

"5G studies are starting to gain real momentum as we point toward 2020," said Seizo Onoe, EVP and CTO at DoCoMo. "We appreciate that 5G will provide significant performance enhancements to support future new applications that will impact both users and industry. We look forward to showing the potential of 5G radio access technologies via this experimental trial."

We don’t know too much about the exact form of the next evolution of the global mobile standard, other than it will likely follow the usual ten-year pattern between generational leaps. Although there has been some attempt to downplay the ‘G’ momentum from the likes of the GSMA, it was never going to happen – all vendors and operators like the chance to win a competitive race and reap the financial rewards, and even the public has caught on to the meaning of 3G and 4G.

So don’t expect to see 5G deployments before 2020. Although a lot of lab-based research has already been conducted on the next generation of wireless technologies (NTT says it began its work back in 2010), there are many issues with standardisation and spectrum to be addressed before it can become the new global benchmark.

DoCoMo sees 5G as a wireless architecture that can enable ultra-high-speed data transmissions at more than 10Gbit/s, with 1,000-times the capacity of existing LTE networks, as well as connectivity for the huge number of M2M and IoT devices expected by the end of the decade. Other challenges that will become relevant for operators include guaranteeing cell-edge data rates in excess of 100Mbit/s and reducing latency by a factor of ten.

Other than that, it’s still all to play for.

DoCoMo will begin indoor trials at its R&D Centre in Yokosuka, Kanagawa Prefecture this year, to be followed by outdoor field trials planned for 2015. Key findings will be shared with research institutes and at international conferences to contribute to 5G standardisation, which is expected to start from 2016.

As for what each selected vendor will be contributing to the trials, DoCoMo has provided a useful diagram. 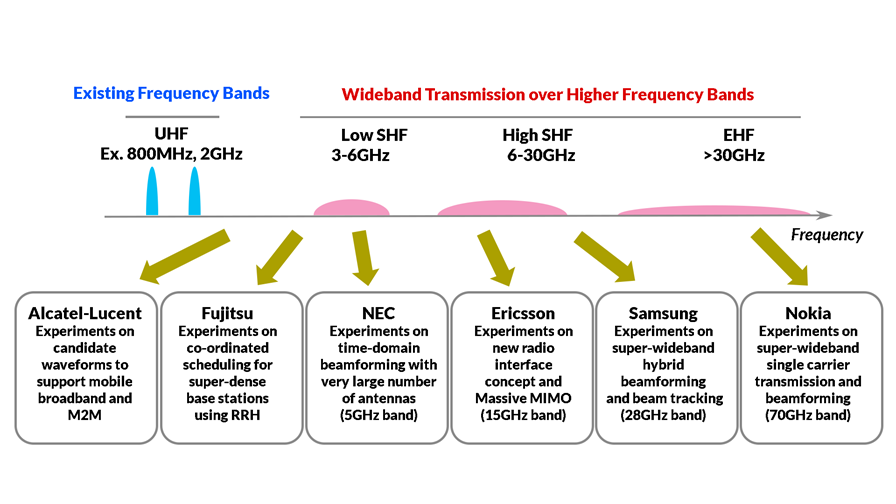 “Our vision is that 5G systems will adapt to the user's needs to create the 'network of you' and a new flexible air interface will be a key element,” said Marcus Weldon, President of Bell Labs and CTO, Alcatel-Lucent. “This air interface will couple to a flexible network infrastructure that takes full benefit from network virtualization and software-defined networking."

“As social infrastructure, 5G is of paramount importance to the future development and growth of society, and we see it as an essential platform for realizing our vision of a Human Centric Intelligent Society,” said Hideyuki Saso, President of Fujitsu Laboratories. “We intend to verify 5G and, going forward, contribute further to society by driving the development of IoT and Big Data."

NEC will look at time-domain beam-forming with very large numbers of antennas for small cells in the 5GHz band. These technologies are expected to improve MIMO (Multiple-Input and Multiple-Output) technology that supports mobile coverage for multiple users simultaneously while reducing interference.

“We are confident that NEC will contribute to the early establishment of 5G technology by leveraging our Small Cell and SDN technology and know-how," said Shunichiro Tejima, EVP of NEC.

"The technologies have the potential of being key components in the industry's movement towards the networked society and 5G,” said Ulf Ewaldsson, SVP and CTO of Ericsson. “This is an important step in the industry transformation we are experiencing."

Samsung will work on super-wideband hybrid beam-forming and beam tracking in the 28GHz band, developing its work on millimeter-wave cellular prototypes.

And Nokia will initially focus on exploring the potential of the millimeter wave technology, investigating super-wideband single carrier transmission and beam-forming in the lofty 70GHz band. The experimental 5G system will be implemented using National Instrument’s baseband modules for rapid prototyping of 5G air interfaces.

"Future wireless networks will interconnect not just humans but also machines and objects, creating a vibrant overlay of virtual and physical worlds with a huge variety of use cases,” said Hossein Moiin, CTO of Networks at Nokia. “Together with the industry, we need to make sure that 5G technology offers the right tenets to serve these use cases flexibly and profitably."

Nokia is also leading the HetNet stream in the EU-funded 5G project, METIS, which defines the basis of the 5G system. Dr. Werner Mohr, head of research alliances at Networks business of Nokia, was elected to chair the 5G PPP Association that will further develop 5G technology to prepare for the future standardisation of the system.

Meanwhile, DoCoMo plans to commercialise its LTE-Advanced service by March 2016, using its own centralised C-RAN architecture to enable small cells to be added to congested areas and to support a (theoretical) downlink data speed of 3Gbit/s.

Whilst back in the real world, I – and many more like me – struggle to get a 3G signal….