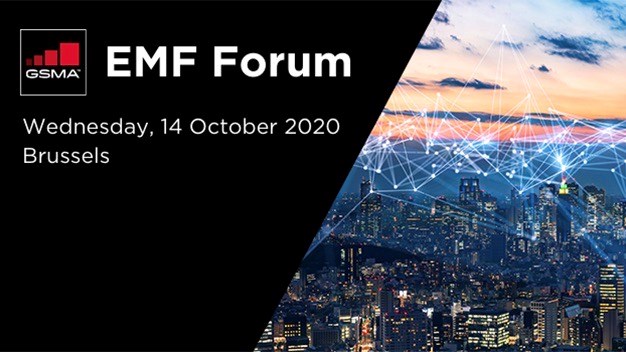 The Big Daddy of all telecoms trade shows, the GSMA's MWC jamboree in Barcelona, can't currently take place as a physical event because of the Covid-19 pandemic, but the Association's work goes on virtually and will continue to do so even after the world rights itself and normal service is resumed. Under those normal circumstances the GSMA's 9th EMF Forum would have convened in Brussels, Belgium, in mid-October but this year the event went virtual.
Along with all the mad rumours and downright lies swirling around the pandemic, much misinformation and disinformation is also being spread about 5G and the alleged effects the technology's electro-magnetic fields (EMFs) could have on the health of the physical world in general and human beings in particular. To its credit, this year's Forum grasped the nettle and focused to large extent on the myths and misinformation/disinformation that conspiracy theorists are spreading about the new mobile technology and the harm these trends can cause if not confronted and refuted continually and head-on.
Forum attendees from the global mobile industry, governments, public health organisations, civic society and policy makers discussed and debated the scientific reality of EMF radiation versus the hysterical polemics promulgated by conspiracy theorists, purveyors of fake news and others of their ilk, such as those activists that have been attacking and destroying 5G antenna sites and threatening on-site telecoms engineers.
The Forum examined the problems in light of the recently update ICNIRP (the International Commission on Non-Ionizing Radiation Protection) 2020 EMF Exposure Guidelines and discussed topics such as public exposure to electro-magnetic fields, harmonised RF-EMF limits and compliance rules and the environmental impacts of EMF.
Dr. Eric van Rongen, vice-chair of the ICNIRP, told the Forum that after undertaking a complete analysis of all scientific papers over the past 20 years, the organisation has concluded there is "no evidence that RF EMF causes adverse health effects other than through heating." He also specifically emphasised that there is no evidence that EMF causes cancers.
The spokesperson from the European Commission’s (EC) Directorate for Health and Food Safety, John Ryan, told the Forum that the EC is well aware of some vocal public concern over 5G EMF and emphasised that the European EMF Recommendation is both scientifically precautionary and the Recommendation's EMF limit values are highly conservative, such that even sustained maximum power 5G radiation levels will never be more than a tiny percentage of legal limits.
Turning to practical tactics and strategies to counter the tsunami of misinformation about 5G, Professor Stephan Lewandowsky of University of Bristol in the UK said the best way to tackle the problem is to "build resilience against being misinformed" rather than sitting back and allowing the misinformation to gain mythic status and reach the point where it is accepted by a minority of the population as scientific fact that is being concealed with malign intent by mysterious and secretive "powers that be".
The key here is that effective communication is based on the audience having trust in what they are being told, and that is why independent scientists and public health professionals should be in the vanguard when it come to refuting 5G misinformation and providing the compelling empiric scientific evidence for its refutation.

When in doubt, debunk, as quickly, loudly and often as possible

Professor Lewandowsky is the co-author of the "Debunking 2020 Handbook" and it is well worth reading as a reasoned and detailed methodology via which to respond to misinformation and fake news, probably the most dangerous and insidious of which, presently, is the widely circulating "rumour  as fact" that there is a link between the transmission of Covid-19 and the deployment of 5G technology.

The Handbook defines false information as that which is spread by mistake or with intent to mislead. When the intent is to mislead it becomes disinformation. Both variants have the potential to harm individuals and society. What's more, misinformation, like chewing gum on the sole of a shoe.can be very sticky. Fact-checking and refutation based on countervailing empiric evidence can help and sometimes seemingly even completely demolish false news in the mind of an individual or group of people, but research has shown that very often the misinformation continues to influence them even after they have accepted a correction as fact. This is the "continued influence effect".

The Handbook adds that as misinformation is so sticky the best way to beat it is to pre-empt it by demonstrating and explaining the manipulation strategy underlying the fake news. This technique is called "inoculation" and its intent is to make recipients increasingly immune to misinformation and disinformation. It's a good idea but hard to employ in practice because inoculation is predicated on advance knowledge of misinformation techniques being deployed at any time and the refutation reality is best injected is best administered before exposure to misinformation.

If pre-emption is cannot be effective, another solution is debunk, loudly, often and with highly detailed refutations. That requires clear explanation of why the fake news is fake and a demonstration of what the truth actually is. So, those charged with countering the misinformation and downright fabrications being heaped on and around 5G need to follow a four step approach: start with the facts, warn about the myth, explain why the myth is false and its inherent fallacy, and, fourthly, reinforce the fact or facts as often a possible.

It is also to be be hoped that as 5G becomes commonplace and people get used to it and begin to understand and appreciate the many benefits and innovations it will reduce the amount misinformation, disinformation and scaremongering and perhaps even bring it to almost a full stop.