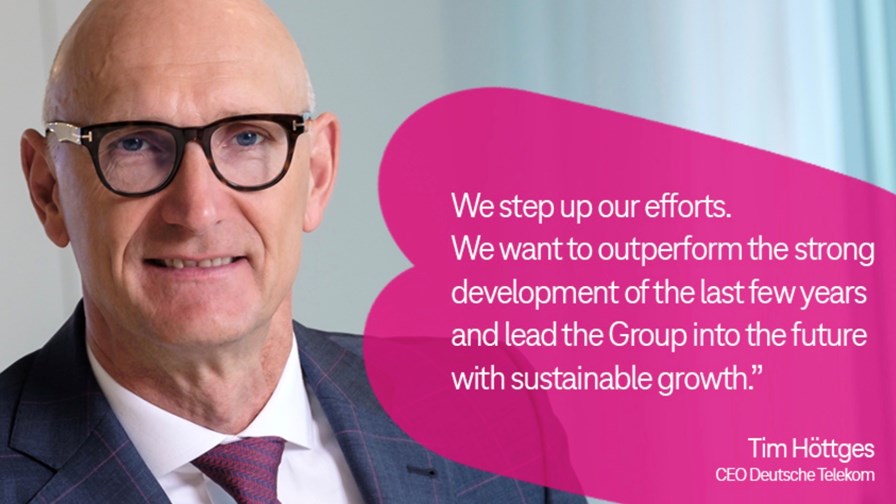 Deutsche Telekom laid out its bullish plans for accelerated growth over the next few years during its Capital Markets Day presentations on Thursday morning and confirmed its plan to increase its stake in T-Mobile US in the next few years.

One of its"key messages" to sharehokders was that it will "take the path to US majority," which will mean increasing its stake in T-Mobile US from its current 43% to at least 51%, which it may do by acquiring SoftBank's 8% holding (to which DT has first right of refusal).

The operator’s management was presenting only weeks after announcing healthy first quarter financial results, boasting of a strong performance on “both sides of the Atlantic” and noting that the acquisition of Sprint by T-Mobile US, which continues to attract consumer users and has ambitious goals in the enterprise services sector, is “paying off sooner than expected.”

“We step up our efforts,” noted CEO Tim Höttges. “We want to outperform the strong development of the last few years and lead the Group into the future with sustainable growth.”

DT expects its group revenues to grow by between 1% and 2% per year up to 2024 and its adjusted earnings per share to grow at 3-5% per year, which in turn will lead to better dividends for shareholders. DT had been signalling a positive outlook prior to today, but the news still gave its stock a 1.7% lift to €16.87 – that’s up by more than 11% from the start of this year. (For further financial details, see this announcement.)

Höttges outlined five key areas of focus for the next few years, and a while a few of those are weighed down with marketing sparkle (“Turning customers into fans” sounds very 1990s…) the key drivers will be very familiar to many other operators – investing in fibre broadband 5G to offer broad, quality coverage, doubling down on service development for enterprise customers, highlighting and accelerating sustainability, and digitalizing its business in all areas. With regards to that final item, DT noted that it expects 30% of purchases by customers in Germany to be “via electronic channels” by 2024 and that it aims to evolve from being a “monolithic incumbent” to being an orchestrator of multiple networks and shifting from “vertical silos” to becoming a cloud native, API-based Telco-as-a-platform.

The operator also made broader references to its portfolio and strategic focus. It noted that following a number of non-core divestments during the past few years – a process it refers to as “cleaning the garage” (the sale of Telekom Albania and of its fixed line business in Romania, for example) – it is now “assessing” its ownership of T-Mobile Netherlands and reviewing ownership of its tower portfolio, a process that has already started with its joint venture in the Netherlands with Cellnex and its involvement in a Digital Infrastructure Vehicle (DIV), again in partnership with Cellnex. (See DT, Cellnex form infrastructure venture, combine Dutch tower assets.)

And DT highlighted what it calls its M&A “discipline,” calling out in its presentations how it has kept clear of “big adjacency acquisitions” and “expensive premium content.” This has helped it to “outperform peers,” a statement no doubt referring to AT&T and Verizon, both of which spent vast fortunes buying up media and entertainment assets in the past few years, only to sell and spin them out in recent weeks. (See Verizon bows out of content, dumps AOL and Yahoo and What’s up with… AT&T + Discovery, the value of 5G, Telefónica.)

There appears to be a new mantra amongst h Tier 1 telcos currently – that their strategic focus is on building the very best fixed and mobile broadband access networks (5G and FTTx) and developing the automated, software-defined, AI-enabled, data-driven support systems that will increase efficiencies and boost customer satisfaction, all done in a way that is kinder to the environment. (See Why Vodafone’s strategy makes sense.)

And if it’s true that it pays to play to your strengths, then this surely seems like the best way forward… for now.