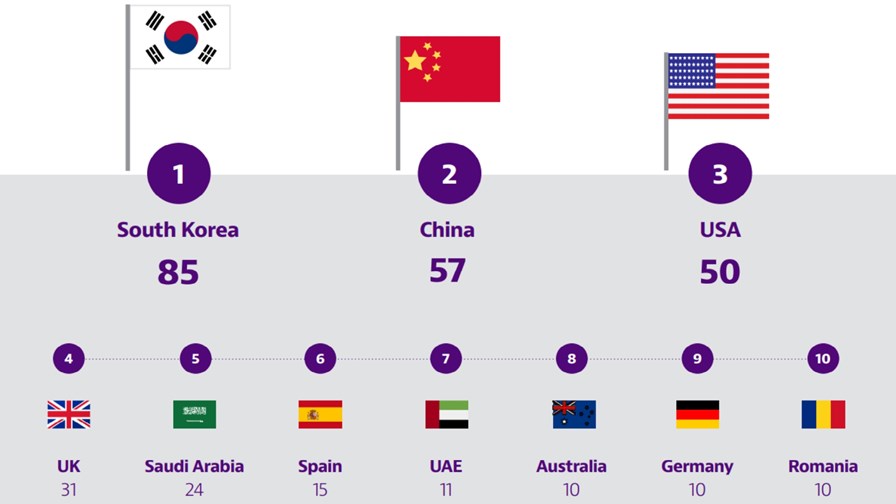 Test & measurement and assurance firm Viavi has been monitoring the spread of 5G in cities worldwide.  It finds that as of January 2020, commercial 5G networks have been deployed in 378 cities across 34 countries; and it has outlined the situation in a multi-image infographic. (see above)

The country with the most cities with 5G availability is South Korea with 85 cities, followed by China with 57, the United States at 50, and the UK with 31 cities. In terms of regional coverage, EMEA leads the way with 168 cities where 5G networks have been deployed, Asia is second with 156 cities, with 54 cities covered by 5G across the Americas. Deployments include both mobile and fixed wireless 5G networks.

I’m not sure that a city count means much in terms of 5G rankings when approaches are so diverse, spectrum allocations so different, topography so variable and so on.

For instance, there are 310 cities in the United States with a population of 100,000 or more and according to the chart just 50 of them today have some 5G operating somewhere within them. There are  66 cities in the UK (although qualifying for city status is confused and can require cathedrals) and 31 (nearly half) of them have 5G. So in terms of the current 5G consumption per unit of population the UK must be well ahead of the US. Korea must be so far ahead as to be out of sight.

Nevertheless Viavi frames these stats as a snapshot in an ongoing “battle for 5G supremacy”, whatever that means. I can’t see a ‘battle’. Looks to me more like a set of technologies and interconnection standards being shared and increasingly jointly developed through open source and other open initiatives. Others like to see it differently.

“For 5G operators there is a heady mixture of optimism and fear,” said Sameh Yamany, Chief Technology Officer, VIAVI. “The optimism is related to a plethora of new commercial applications that could change operator economics for the better... the immediate fear is that they will get left behind in the short-term marketing battle by rival operators.”

Viavi thinks the focus of operators’ competitive attention will therefore soon be on network performance.

Viavi is a T&M equipment and network assurance vendor, so can be excused for viewing the competitive basis of the 5G world with a rather narrow focus -  it wants to sell to T&M kit. Validating security and then optimising network performance is obviously an important activity.

But after a level of raw network competence has been attained (no doubt measurable by Viavi) the ‘success’ of a 5G network business will be the result of much more than just test results, and much, much more than the number of cities an operator has planted some 5G in.

The strategic business and people issues are what operators and vendors are really focusing on in the next 5G stage, but the race to sanity has only just begun.

The full State of 5G Deployments infographic is available here.