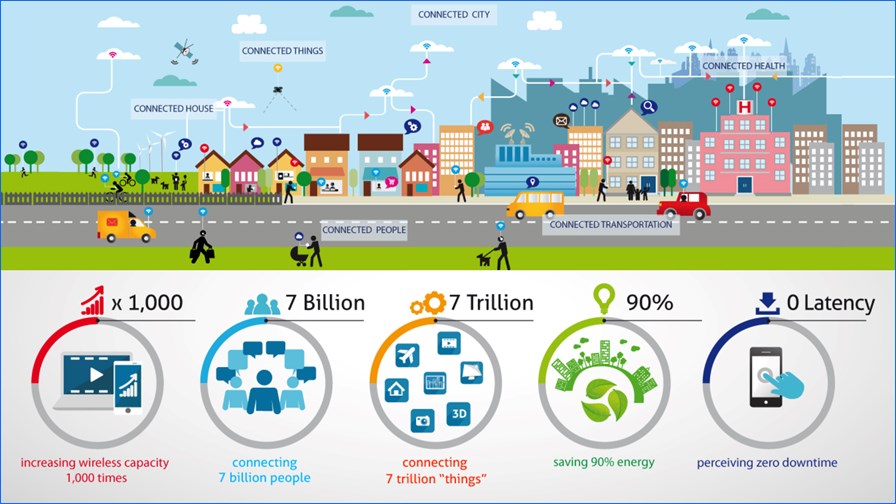 The hype battle between Wi-Fi and 5G rages on (see - Huawei hypes up indoor 5G, positions its 5G LampSite family)

And it strikes me that in this, as in so many things, the louder the squabble the more likely it is that the two sides are evenly matched in some important ways.

Perhaps we should start viewing them (5G and Wi-Fi) as two formerly distinct technology sets that are steadily acquiring each other’s attributes, with cellular working from the top down and Wi-Fi working more ‘bottom up’.

Cellular’s major deficit (as the continued growth in WiFi attests) was its inability to put downward pressure on its cost per bit - hence the oft-quoted scissors graph which showed the costs of shoving the bits around continued to grow (or at least not diminish fast enough) while the revenue gained from selling them fell. To cure this the cellular industry lusted after high frequency public or shared spectrum across which it could flood low-value data, thus saving its licensed spectrum for business and first class customers or for applications that required deterministic delivery. The move to exploit pubic spectrum began in 4G, but has carried through to 5G, along with efforts to improve spectrum utiisation. The upshot is that 5G will have much more throughput to play with.

Meanwhile WiFi has long been pinned with a ‘cheap and therefore nasty and unreliable’ label, and it has been closing the gap with cellular by using sophisticated techniques designed to extend coverage indoors, incorporate new spectrum bands and utilise newer, faster and more efficient technical standards.

Now, according to Claus Hetting, CEO and Chairman of Wi-Fi Now, Wi-Fi has recieved a big boost from Cisco’s wireless CTO, Matt MacPherson (speaking at ‘Wi-Fi NOW’ in Berlin). He says Wi-Fi is capable of delivering predictable performance, making it possible “for service providers and enterprises to serve up Wi-Fi according to definable SLAs,” writes Claus, who maintains the catalyst is the imminent market entry of Wi-Fi 6, which Cisco says is capable of providing determinism at scale.

With 5G too, the big step forward is its ability to take advantage of network slicing to deploy different services, using a variety of appropriate protocols within each slice so that 5G operators can offer proper service level agreements with specified allowable downtime, maximum jitter and delay and reliability -  all backed up with penalties should the service prove unable to perform.