Streaming players to be hit by European cultural quotas

This month the European Commission announced that the EU would push ahead with content quotas for online streaming services, forcing streamers to support local content. The idea is that such a scheme would help promote cultural diversity and stimulate more locally produced film and online video content. The new rules will affect (as they were designed to do) Netflix and Amazon Prime particularly and will mean that at least 30 per cent of their on-demand streaming content must be productions made in the EU member states where those services are provided. To help prevent compliance get-arounds, the local content must be clearly displayed and easy to find.

According to Ampere Analysis (which tracks Europe’s media market) the regulations look like requiring SVoD providers to furnish at least 30% of their catalogues with European-originated content. The exact details aren’t yet available but Ampere expects that Netflix, for instance, may have to add over 4000 hours of European content or nearly 800 European titles to its UK catalogue to meet the new quotas. Amazon Prime would have to add nearly 2000 hours or 400 titles to its UK catalogue.

The new euro quotas could be implemented by the end of this year.

The directive is unlikely to go down well in the US where European cultural protectionism has long crystalised differences between Europe and the US over content, culture and state support, although Trump’s recent comments on patriotism as an alternative to globalism might (logically) indicate a softening on that score.

European policies to protect language and culture are long standing: cinemas and broadcasters can currently be made to screen a proportion of locally produced content, often as part of a programme to support minority languages. Even the UK (which usually has a more relaxed attitude to the import of US culture) was demanding local content cinema quotas as recently as the 1970s. This gave rise to what were soon referred to as ‘Quota Quickies’ which were of such  excruciatingly bad quality that they were ended out of sheer embarrassment.

The SVOD providers are already upping their spend on their own content as they try to tackle what they hope will be the next growth phase. They don’t have to actually self-produce local content to meet their quotas, but at least some of their original commissioning is likely to be for local production as they  ferret out new customer segments to package content for. 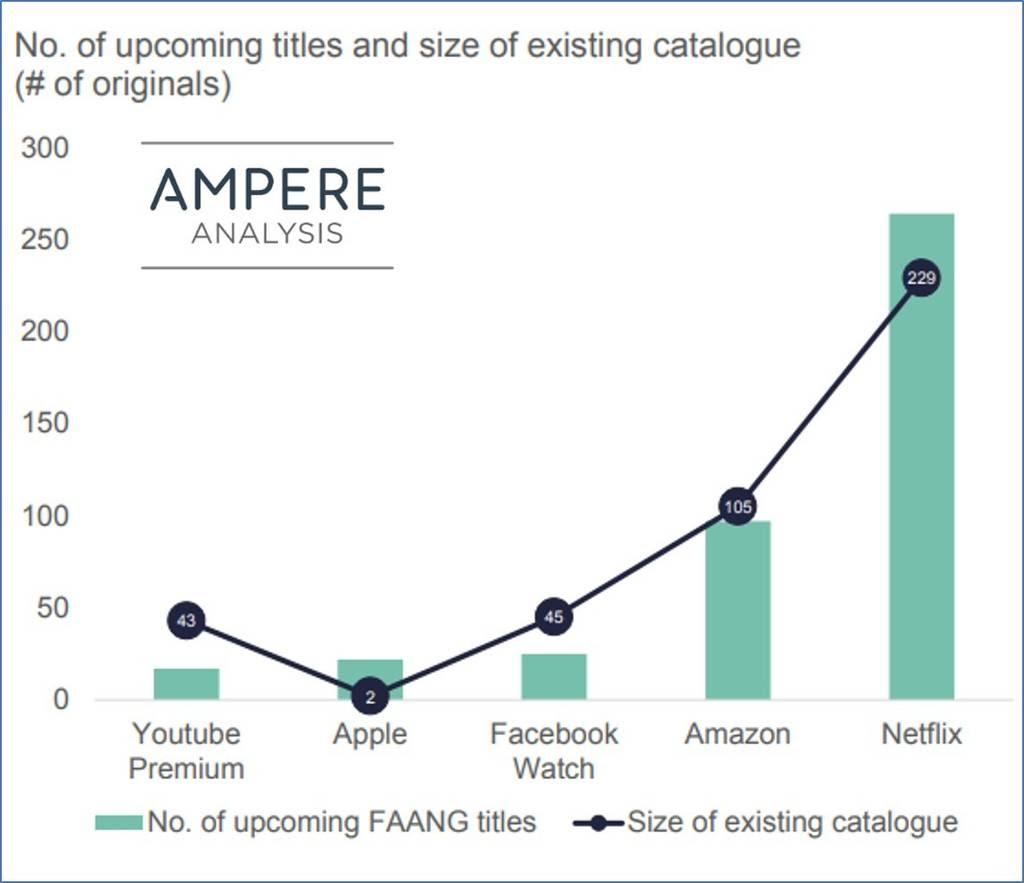 According to Ampere Analysis, the so-called ‘FAANGs’ (Facebook, Apple, Amazon, Netflix and Google) are on a commissioning spree.  It claims Netflix continues to lead the way in original content creation, with Facebook, Apple and Google with YouTube following on behind.

Netflix is leading the commissioning spree with over 250 upcoming titles. This will more than double their originals, as studios such as Disney remove successful content from the Netflix platform.

Apple, YouTube and Facebook are making unprecedented strides in original production with 65 upcoming original titles between them.

Though YouTube Premium appears to have fallen behind with the least new orders, the service has promised 50 new shows by the end of 2019.

Beyond the FAANGS, other services are biting into original commissions. Emerging SVoD players Disney DTC, Britbox and DC Universe have announced their first original series.

Disney appears to be leading in this emerging market having revealed 19 new original series, including a High School Musical and Monsters Inc. spin off.

Meanwhile Netflix has been busy upsetting German arthouse cinemas by going its own way on release schedules. In Germany, films are screened first in cinemas then, and only then, on DVDs and streaming services, then television.

So when a Netflix film, Alfonso Cuarón’s black-and-white epic Roma, won the main prize at the Venice Film Festival the German cinemas were dismayed to be informed that Netflix planned to show the film on its own platform (ie Netflix) simultaneously with the cinema release.

Cue extreme annoyance. The cinemas accused  Netflix of undermining a successful system, and are threatening not to show any further films produced for Netflix.