May 18, 2017 — Intel Corporation today released its 2016 Corporate Responsibility Report, a comprehensive review of the company’s performance in areas that include environmental sustainability, supply chain responsibility, diversity and inclusion, and social impact. As an electronics industry innovator and corporate responsibility leader, Intel is committed to applying its technology to global challenges and building a better world. 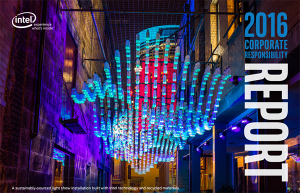 Intel published its first environmental report in 1994, and the new report builds on the company’s long history of leadership in transparency and voluntary reporting. Intel was among the first companies to adopt the new Global Reporting Initiative (GRI) Standards. Today Intel continues to advance its integrated reporting strategy and to increase transparency in a number of areas, including the company’s approach to human rights and how its corporate responsibility strategies and technology support the United Nations Sustainable Development Goals.

Building on its long history of reductions in carbon emissions and investments in water conservation, Intel continued to take actions in 2016 to achieve the lowest environmental footprint possible, while also collaborating to help others use our technology to lower their own footprints.

Intel continued to invest in initiatives and take actions to advance diversity and inclusion, not only within our own company, but also in the technology industry more broadly. Intel also invested in innovative programs aimed at building pathways to technology careers.

Intel continued to build on its long history of investing in education and technology empowerment through the development of new initiatives and continued to empower its employees through impactful service opportunities.

1 “Conﬂict-free” refers to products, suppliers, supply chains, smelters and refiners that, based on our due diligence, do not contain or source tantalum, tin, tungsten or gold that directly or indirectly finance or benefit armed groups in the Democratic Republic of the Congo or adjoining countries.

2 Full representation is the point at which Intel’s workforce in the U.S. matches the supply of skilled talent available (market availability) for current roles at Intel.