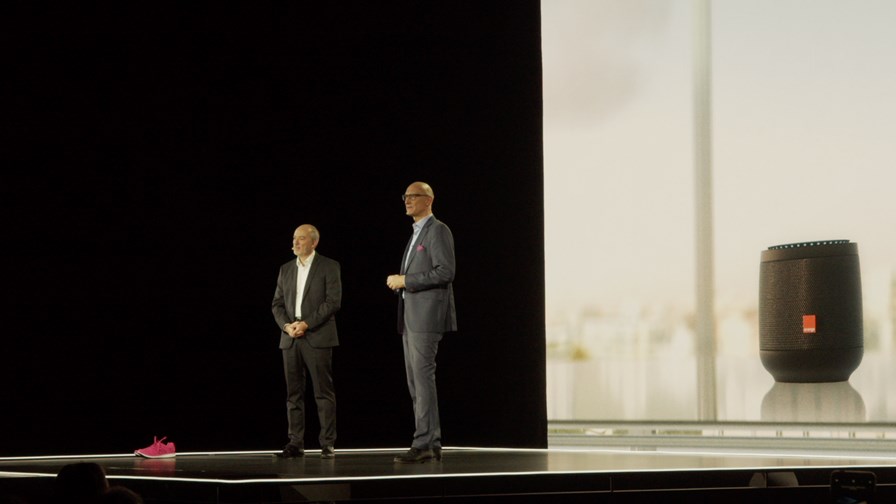 Speaking before an audience of 1,000 predominantly French business executives and ecosystem partners at its sixth annual Show Hello event in Paris last week, Orange Group Chairman and CEO Stéphane Richard repeatedly emphasised the need for full digital inclusion and the leadership role that Europe must take to combat the dominance of the global tech giants. He was joined for part of the presentation by Tim Höttges, CEO of Deutsche Telekom, who supported the call for Europe – and in particular France and Germany – to do more.

“We want innovation to be people centric,” announced Richard. “Inclusive innovation in every area – IoT, AI and even the network.” He added that: “We need to factor the network back into the equation. The network is one of the keys to build a more inclusive digital society. We need to design the network and take control over it. That’s what Orange has always done.”

He said that less than 1 in 4 French people today own a connected object. The real promises of IoT have yet to materialise. The problem is that IoT and smart homes are not that simple; it requires a complex ecosystem and involves many brands that most consumers probably haven’t even heard about.

His strategy is to use the Orange brand to create a trusted and secure smart home. Starting in Q1 2019, customers in France will be able to connect and control smart objects via their Orange Livebox gateway/router. This way, it can try to ensure that connected objects can be trusted by consumers and are safe to use. It has hand-picked it partners based on the strengths and quality of their products and insist that their security is as good as that of Orange. A software update to Livebox will mean that 3 million homes will be able to benefit from Orange’s secure connected universe at no extra cost.

This led nicely to the subject of AI. Richard told his audience that less than 1 in 10 French citizens use a virtual assistant today, but this is about to change. He announced the Djingo smart speaker – a voice-controlled interface for all Orange services, functioning as a telephone to make hands-free calls at home, interacting with Orange TV and controlling connected home services. It will also provide access to Alexa, Amazon’s virtual assistant, to offer a range of additional services. Future services will be offered through partnerships with companies such as Deezer, Radio France and Météo France. The Djingo smart speaker will be available in all Orange stores by spring 2019.

Richard says Orange and Amazon share a vision where multiple AIs complement each other to bring the richest experience to customers. The Orange’s Djingo speaker, which comes with both Orange’s Djingo AI and Amazon’s Alexa AI built in, is just the start and both companies say they will expand multi-assistant integration in their future products.

Orange has also formed an alliance for AI with Deutsche Telekom and over the last 18 months have built a team of around 150 experts to develop hardware and software components for AI, pooling their knowledge and design resources. The immediate result of the 50:50 JV is a simultaneous release of physically  identical (except for the colour and branding) smart home speakers – Djingo for Orange and Hello Magenta for Deutsche Telekom.

“This is only the beginning of a closer collaboration between Orange and Deutsche Telekom,” said Deutsche Telekom CEO Tim Höttges. “This is the first step towards a genuine digital Europe.” He added that: “A digital Europe has to become a priority. Our economy faces major challenges from the major internet companies of North America, and we are challenged on the industrial side from China. Today, only 4 per cent of world data is stored in Europe on France and Germany.”

To counter this, all the data processed by the new Orange-DT venture will be stored in Europe. As Höttges rightly told the Show Hello audience, the more data the established players get through AI, the better their services become. He and Richard believe they have to do something about it, “to eliminate competitive asymmetrics with Internet companies”.

“Let’s build the Franco-German partnership and collaboration,” said Richard, adding that “This push in business must be followed by a push in policy.”

And there you have it: the CSP identity crisis. On the one hand, Orange is proudly showcasing its AI and smart home credentials for its domestic market with a definite ‘France First’ statement of intent; on the other hand it is celebrating a pan-European alliance and calling on the European Union to provide more regional support, but at the same time it is pleased to be collaborating with the US-based Amazon on AI virtual assistants. And Orange is not alone here – this dilemma is also troubling the rest of the world’s CSPs.