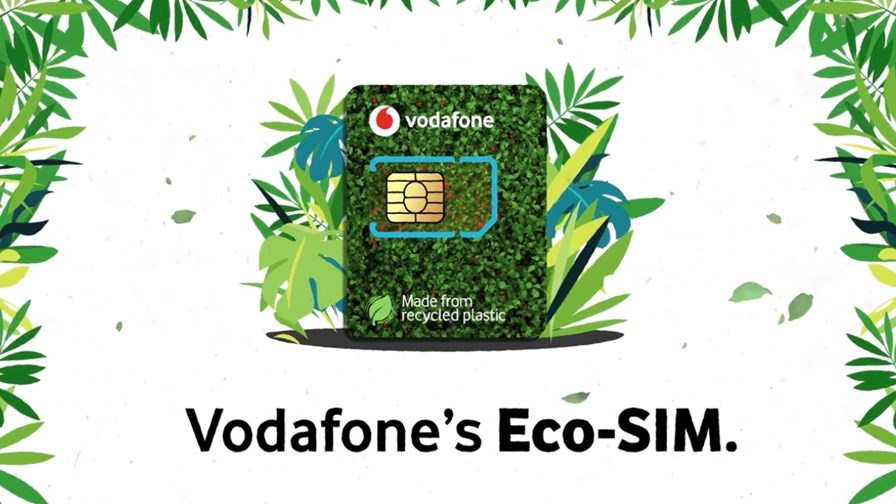 A step in the right environmental direction for SIM cards at Vodafone and a rubber stamp for ETSI’s alternative 5G standard for enterprises and IoT are the cherries on top of today’s news cake.

Every little helps. Vodafone is launching Eco-SIM cards as part of its commitment to reduce its impact on the environment. With effect from this week, subscribers can get new “half-sized format” Eco-SIMs made from recycled plastic and Vodafone will now progressively replace SIM cards made from so-called “virgin plastic.” The new Eco-SIM will be rolled out across all 12 of Vodafone’s European markets, Albania, the Czech Republic, Germany, Greece, Hungary, the Republic of Ireland, Italy, the Netherlands (as Vodafone Ziggo), Portugal, Romania, Spain and the UK. They will also be available in Egypt, South Africa and Turkey. Vodafone began reducing its plastic footprint last year when it globally introduced half-sized SIM card holders. That initiative reduced Vodafone plastic output by 340 tonnes in a year, which is the equivalent of 1,760 tonnes of carbon dioxide. The new Eco-SIM will save the need to manufacture 340 tonnes of new plastic, the equivalent of 1,280 tonnes of CO2. The recycled plastic Eco-SIMs are part of the mobile carrier’s long-term plan to continue reducing carbon emissions and driving energy efficiency. Last November, the company set an approved 2030 Science-Based Target in line with carbon reductions required to keep global warming to 1.5C: Vodafone was the first major telecoms operator to follow the emission reduction pathway developed for the ICT sector. The plan calls, by 2030, for the company to eliminate all carbon emissions from its own activities and from the energy it purchases and uses. Meanwhile, and to a shorter timescale, Vodafone will reuse, resell, or recycle all its network waste by 2025.

European industry specifications organization ETSI says ETSI DECT-2020 NR, the “world’s first non-cellular 5G technology standard, has been recognized by the WP5D of the International Telecommunication Union’s Radiocommunication Sector (ITU-R) and included as part of the 5G standards in IMT-2020 technology recommendation.” Released last year, ETSI says the standard is designed for enterprise and massive IoT networks, and that because it is decentralized and not tied to any infrastructure, it costs “only a fraction of the cellular networks both in dollars and in carbon footprint.” It “lets any enterprise set up and manage its own network autonomously with no operators anywhere in the world. It eliminates network infrastructure, and single point of failure - at a tenth of the cost in comparison to cellular solutions. It also enables companies to operate without middlemen or subscription fees as well as store and consume the data generated in the way they see best fitting for them (on premises, in public cloud or anything in between).” That’s going to catch the attention of quite a few organizations, surely! Read more.

The Spanish regulator, CNMC, has updated its rules on the wholesale broadband access market and concluded that, as there are now 696 municipalities in Spain covering 70% of the country’s population that are deemed to have competitive infrastructure (compared with just 66 in 2016), Telefónica no longer needs to offer wholesale access to its fibre network in those municipalities, though it must continue to provide rivals with access to its “civil works infrastructure (conduits, conduits and poles),” as well as offer unbundled access to the copper pair infrastructure. The regulator says it “seeks a balance between guaranteeing competition and promoting investment in new generation networks (NGA), those that allow very high-speed Internet connections, mainly fiber optics.” And, based on the progress in Spain in recent years, you have to say that the CNMC has done a pretty good job that sets up Spain to become a more digital economy in the coming years. Read more.

Huawei may be heading out of the mobile network infrastructure market in the UK, but that opens the door for other vendors to step in as 5G networks are rolled out and Open RAN options are explored... Samsung is to conduct 4G and 5G trials with Virgin Media O2 to “verify the capability and performance of Samsung’s 4G and 5G network solutions” in the operator’s commercial network and “assess the interoperability between Samsung’s latest solutions and Virgin Media O2’s 2G and 3G legacy networks.” Samsung will supply its “baseband unit, 5G Massive MIMO radios, as well as 4G radios on both low-band and mid-band spectrums, while being Open RAN compliant with some configuration changes and additional support in the future.” Jeanie York, CTO at Virgin Media O2, noted: “Vendor diversity is crucial to developing safe, secure and more efficient networks. We look forward to undertaking these initial trials with Samsung, which is another milestone in our continued journey to provide the best possible 5G experience for our customers, as well as boosting our 4G network, as we look to upgrade the U.K.” Read more.

Following on TelecomTV’s report yesterday on the feeble collective response of the 31 countries that last week attended the US-hosted Counter Ransomware Initiative, comes figures released by the US Treasury Department showing that American companies and financial institutions reported US$600 million in “ransomware transactions and payments” occurring in the month of June this year alone. To put that in perspective, and to show how pervasive and pernicious ransomware attacks are becoming, the figure for the whole of 2020 was $416 million. To make matters worse, the Treasury Department disclosed some $5.2 billion in “suspicious Bitcoin activity” directly related to ransomware attacks. The analysis is the first one published under the terms of new Treasury Department’s FinCEN (Financial Crimes Enforcement Network) reporting requirements that became law earlier in the year. Of course, the figures published cover no more than the tip of the iceberg because very few victims of a ransomware attack ever report the fact to the authorities. That’s why new legislation is planned to make disclosure mandatory. The report also shows that after being paid a ransom, the criminal gangs involved increasingly push their illicit gains through multiple wallet addresses to minimise the chances of being caught, and those chances are minimal in the first place. The most common variations of ransomware used over the course of the period covered in the Treasury Department report (and there were 68 of them!) were Avaddon, Conti, DarkSide, REvil, and Phobos, with Darkside and REvil being the most prevalent. Almost all transactions were conducted in Bitcoin. That the huge growth in ransomware incidents is worrying the US authorities is evidenced by a comment from Wally Adeyemo, the deputy secretary of the Treasury Department. He said, “The Treasury is helping to stop ransomware attacks by making it difficult for criminals to profit from their crimes, but we need partners in the private sector to help prevent this illicit activity.” Few seem to be willing to volunteer themselves.

Speedtest.net (aka Speedtest by Ookla), the Seattle, Washington-based web testing and network diagnostics service that provides free analysis of Internet access performance metrics including connection data rate and latency, has just released its Q3, 2021 US Market Report. It reveals that in the quarter, Verizon was once again the fastest fixed broadband provider in America, with “Speed Score” of 178.38 Mbit/s. On the mobile front, T-Mobile was yet again the fastest and most reliable mobile operator in the nation with a median download speed of 62.35 Mbit/s and a Consistency Score of 84.4 per cent. Ookla also tested 5G networks and services and again T-Mobile had the fastest median 5G download speed of 135.17 Mbit/s, up by an impressive 36 Mbit/s on the 99.84 Mbit/s recorded for during Q2 2021. Add to that the fact that in Q3 T-Mobile also had the best 5G availability in the US, you can see why the mobile network operator is riding high in public popularity. However, the race to provide the highest 5G consistency is a very close-run thing. Verizon recorded a score of 78.8 per cent, compared to T-Mobile’s 70.4 per cent and AT&T’s 73.8 per cent. Unsurprisingly, the new iPhone 13 Pro Max and iPhone 13 Pro proved to be the runaway winners where the fastest popular device in the US is concerned. They achieved median download speeds of 95.96 Mbit/s and 94.72 Mbit/s respectively. As fans of the songs and shows written by US composer Bob Merrill will know, “There’s a pawnshop on the corner in Pittsburgh, Pennsylvania”, but in Q3 it was also the city with the fastest median mobile download speed in the entire US, at 82.95 Mbit/s. Down in the South, Austin, Texas, had the fastest fixed broadband speed with a median download rate of 196.28 Mbit/s. Ookla’s service measures the data throughput (speed) and latency (connection delay) of an Internet connection against one of 11,000 geographically dispersed servers and each test examines both the downstream and upstream data rate. Since Ookla was founded in 2006 the company has performed over 30 billion tests.

With plenty of domestic business to be had, Chinese vendor ZTE seems to be doing OK despite being vilified by the US. The company has pre-announced profits for the nine months to the end of September of between 5.6 billion CNY ($875 million) and CNY6 billion ($937 million), more than double the profits recorded in the same period in 2020. See this announcement for more details.

The French Space Agency (CNES) has selected Orange Business Services to lead an industry consortium, including HPE, Scality and Tealenium, to “design, deploy and maintain a new storage solution for its scientific and spatial data.” This move will help the agency to “fully modernize its storage infrastructure to better utilize the enormous amounts of data from its satellites.” Read more.