Virtual Reality (VR) was, as expected, on Google’s list of deliverables at its recent  announcement day where it unveiled its new Pixel phones (see - Google launches Pixel phones and fleshes out its 'Google Assistant' on everything strategy)

Also out of the box came its strategy to plant its interactive Siri-like assistant on all its devices and then, a fair way down the list, was its Daydream Virtual Reality helmet which was to be given away to early Pixel phone buyers as part of the package. The helmet would also be available in November for $79 (£69) in the Google Store for use on any Android phone supporting the Daydream virtual reality app.

So there’s a good chance that this helmet is going to be heavily represented in the low-cost category that is expected to grab far and away the lion’s share of the virtual reality hellmut market up to 2019. 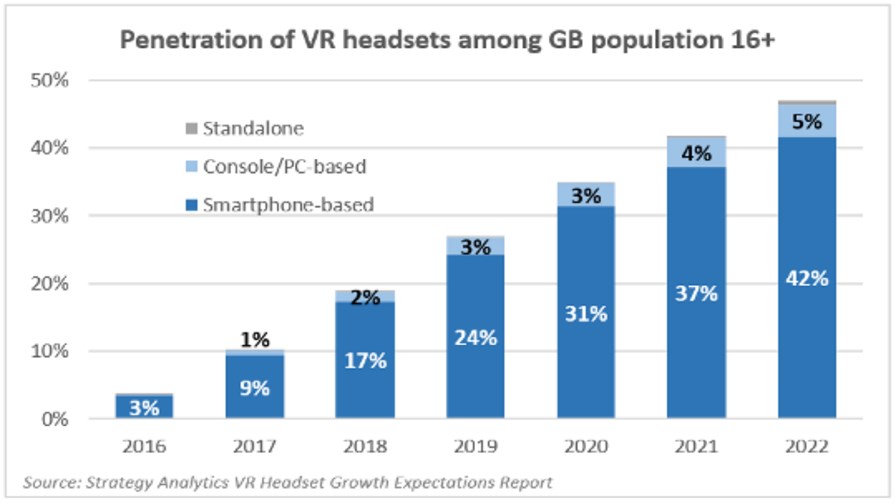 According to Strategy Analytics over 90 per cent of all VR headsets sold will be the ‘slide in your smartphone’ variety - either Google’s do-it-yourself ‘Cardboard’ or more comfortable and durable (and expensive) versions of the same thing .

In fact there are all sorts of helmets already here or on the way, Some plug into PCs or gaming stations, some are fully featured, dedicated helmets like the Oculus Rift or HTC Vive, but it’s the low-cost ones that are going to dominate the scene (see chart), with the expensive sets expected to grab just 1 per cent market share. By contrast, says Strategy Analytics, over 90% will be basic smartphone models.

In the UK about two million Brits will own some sort of headset by the end of 2016 with prices ranging from under £10 for a Google Cardboard headset to £770 for an HTC Vive and VR headsets will generate £62 million worth of sales here this year.

Strategy Analytics reckons that despite the rush of companies jumping into the  VR helmet market, take-up amongst  Brits public will be a ‘slow burn’.

According to David MacQueen from Strategy Analytics’ global wireless practice there is a the big gulf between price and quality: “the experience of a Google Cardboard versus an HTC Vive is as different as listening to a car stereo versus being in the front row of a concert,” he maintains.

“Despite the slow start, there’s a real opportunity in the longer term,” he says. “VR can bring new experiences to people beyond the obvious next step in video games. There’s also watching sport right in amongst the action, enhanced communications and social networking, plus more serious uses such as better educational materials for kids or use in architecture and design.

When is 5G expected to play a big role in IoT?