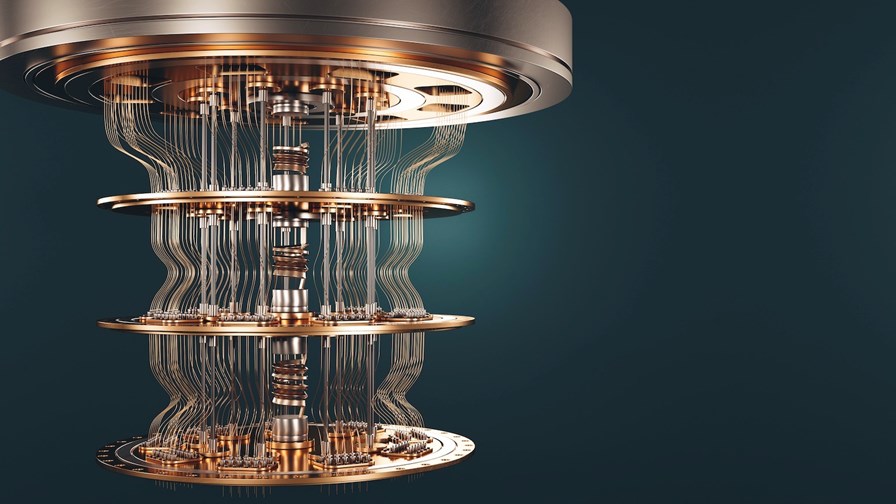 At TelecomTV we have been following the development of quantum computing for quite some time. It is a fascinating and absorbing subject but, as is usual, the quantity (and the usual high quality) of reporting by the global academic community is now close to being swamped by embellishments and tall tales from the media and marketing departments of those looking to turn a buck from the sector. The hype machine is being cranked up and probably will be in overdrive within the next few months.

Indeed, quite a lot of bunkum is already available on putative commercial quantum computing projects and implementations, and sometimes it can be difficult to winnow the wheat from the chaff. So what’s actually going on? Here’s a take on the likely direction of the quantum computing sector during the next 12 months, as gleaned from a variety of attributable sources.

Starting with the public sector, a report from McKinsey & Company shows that this year China (PRC) and the European Union (EU) will be ploughing the most cash into the further development of quantum computing. The PRC is committing at least US$15.3bn and the EU $7.2bn. Their planned expenditure is far and away greater than the sums being committed by the rest of the world combined.

Meanwhile, as we reported last autumn, the National Institute of Standards and Technology (NIST), which is a part of the US Department of Commerce, has, after a lengthy search, selected four quantum computing algorithms that will soon become the definitive quantum computing standard that will enable current data security systems to be rendered future-proof against the incidence of ‘harvest now/decrypt later’ cyber attacks, where hackers archive encrypted data they have stolen to decrypt as and when quantum computing becomes available.

It is evident that immediate steps need to be taken to protect current data from later attacks via quantum computer systems but – and this demonstrates the head-in-the-sand attitude of many businesses and organisations – recent research from Deloitte showed that US businesses (and others) simply refuse to prioritise security measures to prevent quantum hack attacks unless they are compelled to do by externally imposed regulation or legislation.

The technology has a major political component

Evidently, healthcare will benefit enormously from the introduction of quantum computing, while cybersecurity has long been identified as a key sector that will be affected by its application.

A key area of significant research will continue to be quantum random number generation (QNRG), which is a probability-check algorithm to generate random numbers with a high source of entropy (the measurement of uncertainty or disorder in a system). In cryptography, randomness is pervasive and without it all crypto operations would be predictable and thus inherently insecure, hence the continuing need to find new random numbers with which to generate secure cryptographic keys. Research into quantum key distribution, a mechanism by which secure communication between two parties can be established, will also continue apace.

This is a subject very much in its infancy but, despite that, it is being massively hyped, even though there is minimal evidence of any need for the technology. Indeed, Dr Ryan Sweke, a research scientist in quantum physics at the Free University of Berlin in Germany, has said of quantum machine learning, “I have not seen a single piece of evidence that there exists a meaningful [machine learning] task for which it would make sense to use a quantum computer and not a classical computer.”

Research is also ongoing into hybrid quantum computing, the combination of quantum and ‘classic’ computing, whereby quantum bits (qubits) are used for processing to solve particular problems more quickly than would be possible with a traditional computer alone. The application with the greatest immediate potential to benefit from hybrid quantum computing is more precise weather forecasting.

There is widespread speculation that this year will mark the start of a new trend – a gradual switch away from the race by big companies to develop technologies (such as trapped ions and superconducting circuitry) that will facilitate the production of ever greater numbers of qubits on chips.

For example, IBM has been hinting that, later this year, it will announce it has actually produced its oft-rumoured 1.121 qubit processor, ‘Condor’. However, other companies and scientists are working to ensure that quantum computing is more of an immediately practical proposition by concentrating on making computers modular and linking processors together.

To be fair, IBM is also researching modular quantum computing, and the 133 qubits ‘Heron’ processor could well debut in 2023 even as Big Blue’s relentless determination to pack ever more qubits on a processor continues. However, Heron chips will be connected one to the other with conventional electronics, so the information moving between quantum processors will not maintain a quantum state.

Nonetheless, it’s a step in the right direction and, in due course, when fibre-optic technology and optical switches are developed sufficiently to be able to handle quantum data, it is hoped that big, distributed quantum computers could comprise one million connected qubits or more.

Of course, competition to develop the world’s most powerful quantum computing technology is international and has a major political dimension: The focus is naturally on the usual suspects, such as the US, China, the European Union, the UK and Russia, as relations between power blocks continue to deteriorate.

However, smaller, technologically proficient nations are also hard at work. For example, in Japan, Fujitsu is collaborating with the national Riken Research Institute to offer Japanese enterprises access to the country’s first home-grown quantum computer later this year. The machine will have 64 superconducting qubits and, initially at least, will provide support for commercial applications in materials science, the development of new drugs and the finance sector.

Elsewhere, India is ploughing its own furrow and is eschewing superconducting technology in favour of ‘the qudit’ rather than ‘qubit’. A qubit provides data encoding on the traditional 0 and 1 binary level, but qudits enable a bigger space in which to store and process data by providing three and four dimensions without magnifying the likelihood that errors will arise.

Errors are the bane of quantum computing, and the development of processors able to cram in more and more qubits is, in considerable part, designed to provide very necessary error correction capabilities.

Qudits allow for circuits to be less complex and make algorithms more efficient. The Indian government is hoping that a leading position in qudit photonics will enable the sub-continent to carve out a lucrative niche in the strategically important field of quantum-capable secure satellite communications.

As is only to be expected, lurking in the wings is the looming prospect of the regulation and legislation of quantum computing and companies involved with the technology. In the US, the Biden administration is already considering the imposition of trade restrictions on both the exportation and importation of quantum technologies.

How much of this will come to pass in 2023? We’ll be keeping a close eye on developments and, of course, reporting on how it is affecting the world of telecom, where companies such as Vodafone and BT have high hopes for its impact.