FRAMINGHAM, Mass., June 21, 2018 – Worldwide spending on traditional hardware, software, services, and telecommunications is on course for growth of 3.7% this year in constant currency, slightly down from last year's 4.2% growth, and will reach $4 trillion in 2018, according to the latest release of the Worldwide Black Book: Standard Edition from International Data Corporation (IDC).

However, a weakening economy related in part to tariffs, rising interest rates, and slowing growth in China, along with the end of a capital spending cycle, will see growth dip to less than 3% next year as tech spending lags behind GDP growth. By 2022, annual spending will exceed $4.5 trillion with the strongest growth over this period coming from software and services related to 3rd Platform and digital transformation projects, while hardware investments will be led by cloud service provider spending on server/storage infrastructure. Weaker growth is expected from PCs and tablets, peripherals, external storage systems, and traditional outsourcing.

Last year saw a significant rebound in spending on devices, driven by the improving economy and pent-up demand for PC upgrades. The smartphone market performed better than forecast in terms of value, with price increases making up for slowing shipments in many countries. Tablets continued to struggle but will return to modest growth in some countries over the next few years as premium and commercial devices begin to account for an increasing proportion of shipments. Meanwhile, server/storage spending is increasingly driven by cloud hyperscale datacenter buildout but is also benefiting from a significant enterprise upgrade cycle related to product refreshes. IT infrastructure spending, including network equipment, increased by 11% in 2017 and will continue to post annual growth in the range of 8-12% over the next five years even while spending on devices slows again.

"The infrastructure market is increasingly stable because a large proportion is now tied to the service provider model and overall demand for cloud services, which shows no sign of slowing down even in the event of a weakening economy," said Stephen Minton, vice president, Customer Insights & Analysis. "To some extent, this spending will be more insulated against economic downturns than end-user capital spending, and therefore the IT market will be less vulnerable than it was in the past when any kind of GDP slowdown would translate into big declines for hardware spending. Nevertheless, economic risks are now higher than three months ago." 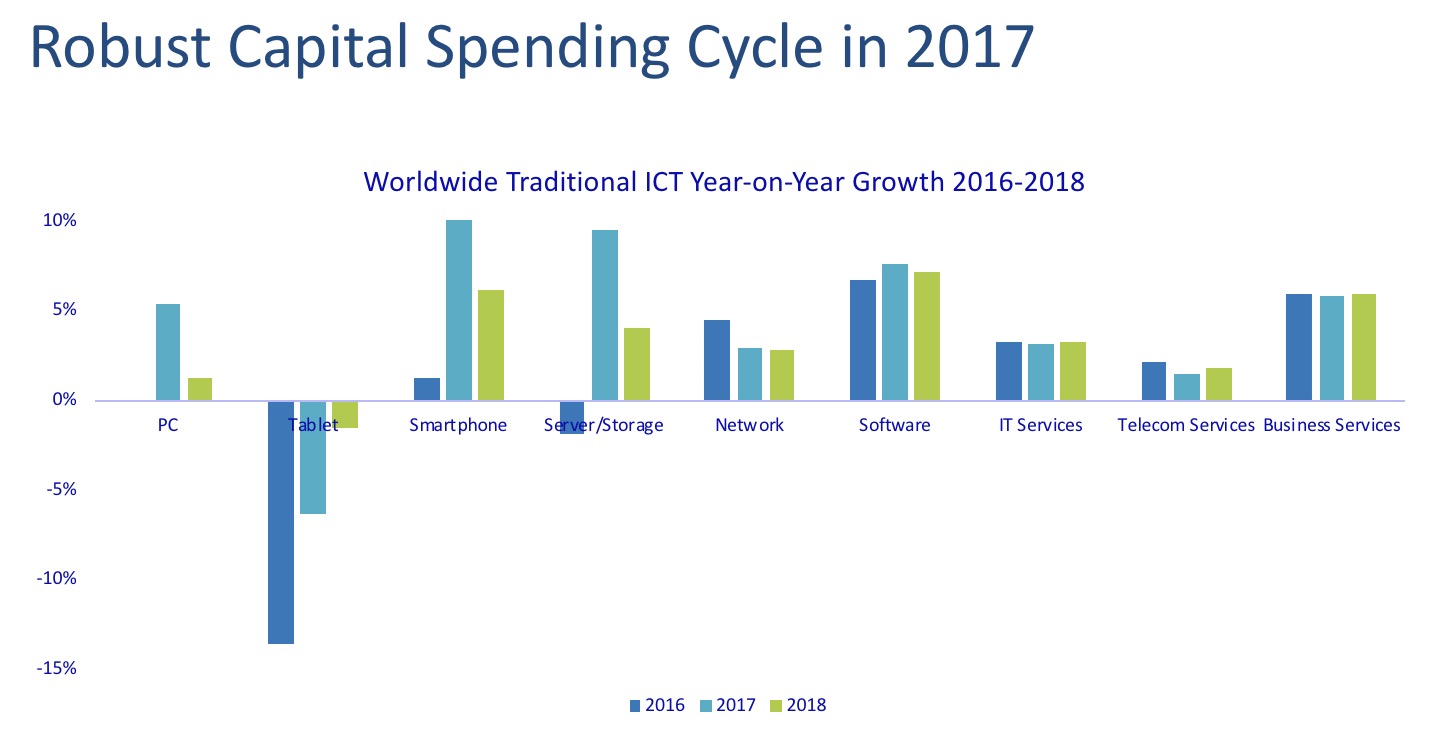 US Demand is Stable, but China Facing Slowdown

All regions saw strong demand for technology in 2017, thanks to the broad-based strength of economic performance. The U.S. rebounded from 1.9% growth in 2016 to 4.5% in 2017. Tax cuts will help to ensure another strong year for the U.S. market in 2018, before overall growth is expected to slow. Many economists now expect a mild recession in the U.S. by 2020 at the latest, but the impact on ICT spending will be less than previous downturns due the growth of the service provider model and the increasing adoption of cost-saving software. Meanwhile overall growth in China slowed from 9% in 2016 to 8% last year and will drop to 6% in 2018.

"The economy is gradually slowing in China, but the real reason for slowing ICT growth is because the market is still heavily reliant on mobile devices, which are now seeing higher penetration rates," said Minton. "Software and services are growing strongly, but still represent a very small proportion of average ICT budgets in China compared to other countries."

Other regions which posted improving growth in 2017 included Japan (+3%), Western Europe (+2%), Central & Eastern Europe (+3%), Canada (+5%), Asia/Pacific (excluding Japan) (+5%) and the Middle East/Africa (+2%). All of these regions benefited from improving business and consumer confidence, which enabled ICT buyers to work off the pent-up demand that had swelled during the prior years of subdued growth.

"Cloud and mobile are still the big drivers for traditional ICT spending, as legacy products and services like desktop PCs and fixed-line networks either stagnate or begin to decline," added Minton. "This means what while the overall market is broadly tracking GDP, there is a lot of variation by product category. cloud-related hardware, software, and services are posting strong rates of growth. For example, Infrastructure as a Service (IaaS) is expected to grow by another 37% this year and will continue to grow by around 30% per year over the forecast. This in turn will ensure that cloud service providers continue to invest in server/storage and network infrastructure."