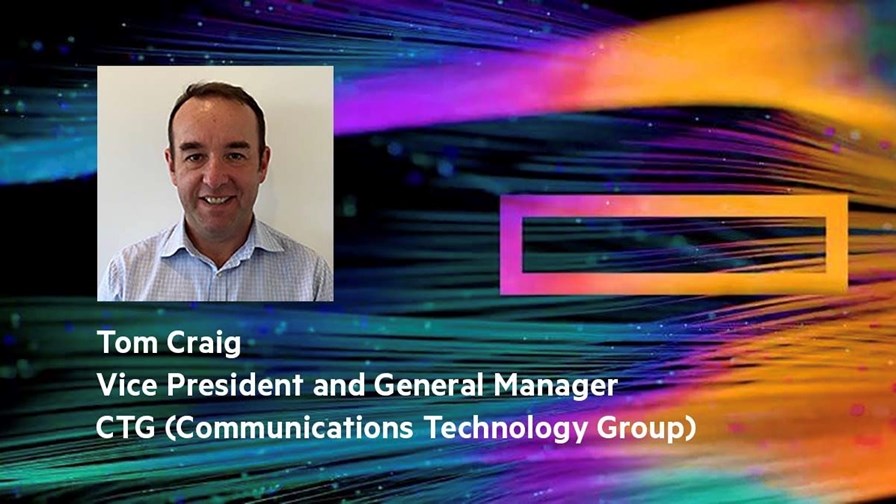 A new face at HPE’s telecoms division and some 5G-related cloud-native action at Telefónica and BT take pole position on today’s news grid.

Hewlett Packard Enterprise (HPE) has appointed Tom Craig as the new General Manager of the Communications Technology Group (CTG) following Phil Mottram’s move to head up the vendor’s Intelligent Edge business in the summer: Mark Colaluca had stepped in as interim GM when Mottram made the move across the HPE empire. Craig has plenty of telecoms industry experience, having held executive roles at BT Global Services and Vodafone Group. Recently he has been working as a consultant for operators such as Ooredoo, Millicom and Tele2.

Telefónica has turned to IBM and its partners to deploy what the operator says is its first cloud-native 5G core network platform based on its UNICA Next telco cloud architecture. The giant telco has brought together systems integrator IBM Global Business Services, the digital transformation services and consultancy arm of IBM, Red Hat and Juniper Networks to deploy the cloud-native platform across multiple central, regional, and distributed data centres starting next month. Specifically, IBM Global Business Services will deploy IBM Cloud Pak for Network Automation, Red Hat OpenShift, and Juniper’s Apstra intent-based networking tech and its QFX switches. Read more.

Still with cloud native... BT has opted to use the Converged Policy Management suite from Oracle Communications for 4G and 5G policy control and service design, making use of the system’s integrated analytics functions and support for edge routing to implement policy decisions using subscriber, class of service, quality of services (QoS) and network resource data in real time. Oracle Communications Consulting (OCC) will support the policy solution implementation and the eventual migration of BT’s 4G voice and data services services to 5G; assisting BT with policy design, optimization and 5G software testing using Oracle’s Automated Testing Suite. “BT Group, and EE in particular, have a long-standing, successful track record with Oracle,” said Howard Watson, BT’s Group CTO. “As we move to this next evolution in networking, Oracle is helping us reduce complexity with solutions that ease the migration to 5G and provide the flexibility needed both to introduce innovative new services, and also ensure we’re offering our customers the right levels of service according to their needs. Working with Oracle further supports our ambitions towards delivering a mobile network that continues to exceed customer expectations.”

ETSI’s 5th Generation Fixed Network group (F5G ISG) has just released a specification, namely ETSI GS F5G 003, which includes use cases for PON (passive optical network) on-premises and passive optical LAN. The idea is to enable a PON system to connect end devices (like HDTV, HD surveillance cameras and VR/AR helmets) and provide higher data rate, better coordination and controlled latency than current Ethernet and Wi-Fi mesh. The key point is that ‘multiple access aggregation over PON’ (MAAP) could provide various services to multiple types of customers on the same network and guarantee an SLA for each service. Read more.

The Russians are coming: A whole pandemic ago – in February 2020 to be precise – we noted that G-Core Labs, mostly Russian/CIS but headquartered in Luxembourg, had opened a point of presence in London to service and expand its low-latency content delivery services. Now, after what might have been a very slight pandemic pause, it’s in PoP expansion mode again. It has opened new CDN PoPs across the CIS, including in the capitals of Armenia and Azerbaijan, Yerevan and Baku, and a cluster in Kazan, capital of Tatarstan, and now has ambitions to open offices in both the US and Asia, with sights set on Singapore. According to G-Core Labs spokesperson Vladislav Gryadunov, G-Core’s customers are mostly in media delivery, gaming and finance, and to service them properly, G-Core aims to keep latency below 5 milliseconds. In short, there’s been a flurry of activity. “We have experienced an increase in data demand of between 50 and 100 percent in the past year, although we still have plenty of capacity,” he says. The company’s vital statistics have indeed advanced since that last story. In early 2020, its stats say it had 60 PoPs, 5,000 peering partners and more than 300 cache servers on five continents: Today it says it has 120 PoPs and 6000 peering partners in over 100 cities and the overall network capacity is more than 75 Tbit/s, easily able to withstand any Web data surges, says Vlad.

There has been a rapid increase in the “maturity level of organisations adopting the industrial Internet of Things (IoT) since the start of the Covid-19 pandemic,” according to the findings of a new report from Inmarsat. According to the report, “IoT adoption has seen huge progress from 2020 to 2021. More than three quarters (77 per cent) of the organisations surveyed have now fully deployed at least one IoT project, with 41 per cent having achieved this in the twelve-month period from the second quarter of 2020. Of the remaining 23 per cent of respondents that have not yet fully deployed IoT projects, all are either currently trialling it, or plan to deploy or trial at least one IoT project in the next 18 months.” According to Inmarsat, respondents from multiple industries highlighted how the impact of the pandemic “demonstrated the importance of IoT to their businesses, with many accelerating IoT deployments.” Read more.

SUSE makes a play for the telco edge