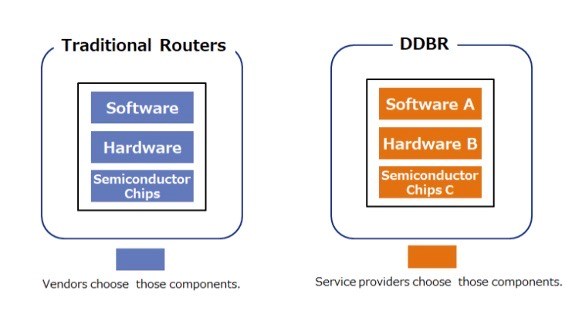 With so much focus these days on Open RAN, it can be easy to forget that the drive towards open, disaggregated, multi-vendor architectures is impacting all parts of the telecom infrastructure, including the important packet routing elements, which is where Japanese operator KDDI has been making significant strides (as well as being an Open RAN advocate).

KDDI has been chairing the Disaggregated Open Routers (DOR) subgroup in the Telecom Infra Project (TIP) Open Optical Packet Transport (OOPT) project group, and, in its own words, has “been active in [the] technical development of carrier-grade white box routers.”

KDDI hasn’t been waiting around, though. It has been conducting what it claims are the world’s first commercial tests of a DDBR using technology from DriveNets and Delta powered by Broadcom’s latest Jericho2 chipsets, and says the resulting router has “enough capability to be deployed in KDDI production networks.”

That’s pretty big news for the carrier, router and TIP communities, because KDDI is a major carrier with very stringent requirements that is operating in an incredibly competitive market: This sends a message that DDBR systems based on the TIP specs are pretty much ready for deployment anywhere.

That’s good news for the likes of DriveNets, Delta, UfiSpace and Broadcom, but not so good for the traditional router vendors such as Cisco, Juniper, Huawei and Nokia, which command the lion’s share of the service provider router market that is worth north of $10 billion each year (based on numbers from research house IDC).

Though just like other open, multi-vendor options in other parts of the network, such disaggregated systems are not going to oust the incumbents and dominate the market overnight – if commercial deployments stand up over time and meet the  kind of economic and performance parameters that Tier 1 operators expect, then they will become part of the mix.

Most importantly, it means the operators have a new option, and aren’t reliant on suppliers that deliver an integrated, closed package of chips, hardware and software: As KDDI notes, the open, disaggregated router option “enables service providers to choose an appropriate combination of software, hardware and semiconductor chips depending on use cases in their production networks. In the commercial testing, the DDBR was proven that it had enough capability to fulfill software/hardware features, scalability and multi-vendor interoperability in KDDI production networks.”

KDDI’s efforts are also a success for TIP’s Open Optical Packet Transport (OOPT) project group, which has been making headway with a number of different initiatives, including its Disaggregated Cell Site Gateway (DCSG), Mandatory Use Case Requirements for SDN for Transport (MUST) and Disaggregated Optical Systems initiatives. You can find out about all the progress being made in this recent TIP blog.