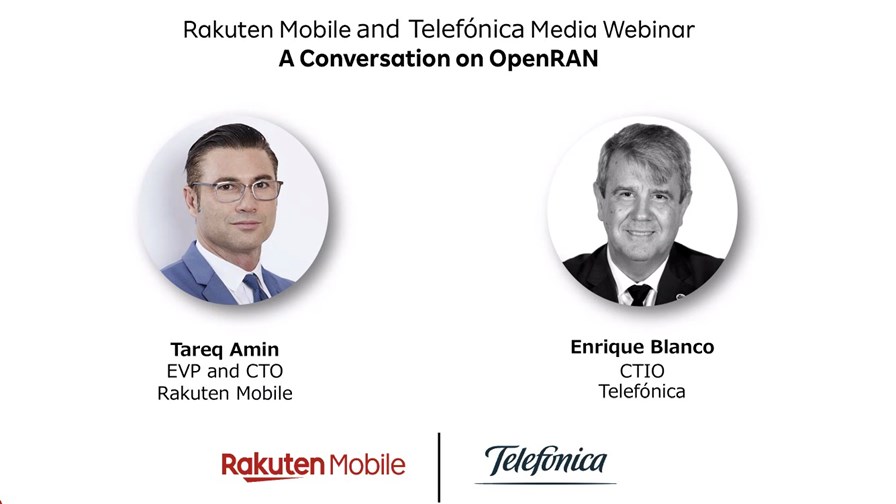 Rakuten Mobile and Telefónica, two of the most vocal supporters of Open RAN networking among the telco community, have struck an agreement to cooperate on the development of open disaggregated radio access networks as well as 5G core and next gen OSS systems, with the chief technology officers of each operator, Tareq Amin and Enrique Blanco, heading up the collaboration.

The formal nature of the relationship is yet another sign of the momentum building behind the Open RAN movement, which aims to foster alternative, open and multi-vendor technology options for the sourcing and construction of radio access networks (public and private). (See Why Open RAN is just too hot to ignore.)

The two operators plan to:

The partners also plan to jointly develop the 4G/5G core and next-gen OSS software being used by Rakuten Mobile in Japan and which Rakuten plans to make available, along with its Open RAN developments, to other operators through its planned Rakuten Communications Platform, which will effectively act as an next-gen telecom networking app store.

The collaboration around procurement schemes is particularly interesting as Rakuten Mobile’s CTO Tareq Amin recently described how his company took a very different approach to procurement for 5G mmWave radio systems by purchasing technology direct from component vendors and cutting out the system vendor “middlemen.” (See Rakuten’s CTO: We cut out the middlemen to build 5G.)

On a joint presentation to the media Wednesday morning, Rakuten’s Amin and Telefónica group Chief Technology & Information Officer (CTIO) Enrique Blanco discussed the collaboration, including the prospects for joint procurement that could shorten sourcing timescales and involve direct relationships with component suppliers, and the importance of the cloud-oriented model to the future operations of telecom operators. That procurement relationship could also involve Telefónica sourcing software from the Rakuten Communications Platform (RCP).

Blanco noted that Telefónica has been working hard to understand “the final architecture,” and how it needs to develop and evolve its network, end-to-end, to meet future requirements, starting with 5G. “We recognized the model at Rakuten,” which has developed and built a cloud native, highly-automated, disaggregated network that, Amin claims, has been built 40% cheaper than would have been possible using traditional vendors and which is running at 30% below the expected operating costs of running a traditional mobile network.

And this is not just exploratory, noted Blanco – Open RAN technology is absolutely going to play a large and vital role in the Spanish telco giant’s future networks, with large-scale procurements and deployments set for 2022 and beyond: “The traditional vendors are not enough,” he noted, hammering home the point that Telefónica is dead set on moving away from proprietary systems, “black boxes” and locked interfaces. The main focus of the work right now, said the Spaniard, was to develop Open RAN technology to telco-grade maturity levels in 2021, as “five nines reliability is essential in 5G.” Working closely with Rakuten will enable that goal to be met, said Blanco.

Blanco explained that moving to Open RAN-based mobile networks will enable it to gain full control over the design and total cost of the architecture, expand the number of technology vendors/developers it works with, avoid vendor lock-in and reduce supply chain risks – risks that have been highlighted in recent times by the geopolitical pressures exerted on Chinese suppliers – and help the operator in its quest to build a “native telco cloud architecture.”

Blanco is particularly focused on how Telefónica can transform its OSS and BSS systems using AI tools in a way that enables widespread process automation, something that Amin says Rakuten is evolving quickly.

“Automation is the main scale differentiator,” noted the CTO. “In Rakuten we started with what we call Rakuten Network Operating System. This is part of our RCP offering. It starts with process automation -- we've done that in the in the first seven months, we have applied an absolute ruthless way of how we manage automation… We started with process automation, we went through a cognitive process automation, we have implemented virtual agents and analytics into the network. And we're marching towards something we call level four autonomous network -- believe me, this is not a white paper. This is within our grasp, that a network could truly self-manage itself, self-heal itself and self-organise itself without intervention, and most importantly, without the legacy building blocks of the organisations that hindered most telecom companies to offer services faster and quicker than OTT and Internet facing companies. This is the secret sauce of what the future telco cloud networks would bring to traditional networks.”

Blanco is absolutely focus on making cloud-oriented networking, including Open RAN, the future of Telefónica’s architecture, and says the process the Spanish operator is going through now is a “natural evolution” that all telcos must address. “When we achieve this, we will be extremely efficient and have much less complex networks than we have today… if you go against this natural evolution, you fail – that is my thinking.”

Blanco and Amin addressed many other topics, including the security of Open RAN networks, a topic that became a very hot topic recently following the publication of a paper by Ericsson: Look out for further coverage of this topic here on TelecomTV.