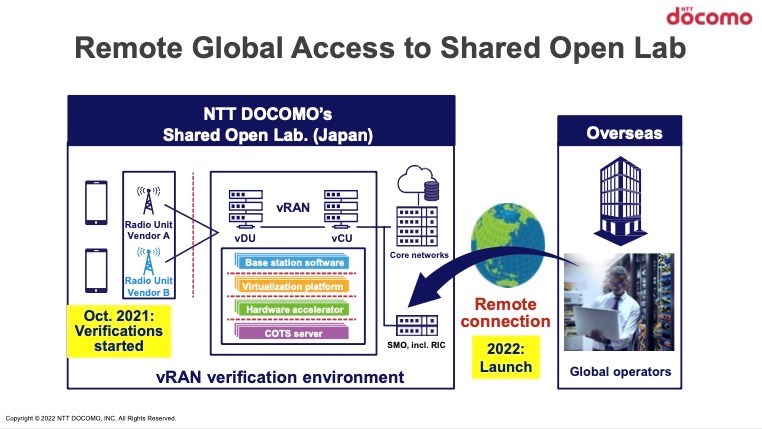 Japan’s telcos, it seems, are on a mission to spread the Open RAN word to the rest of the world: Just as Rakuten Symphony has packaged up Rakuten Mobile’s Open RAN technology to offer it to any other operator that wants to make use of it (for a fee), so NTT DOCOMO is doing the same based on its Open RAN-based 5G rollout experience and know-how, and has opened a “shared lab” with remote global access as part of its expanded 5G Open RAN Ecosystem efforts.

Since then, the Japanese operator has been busy building out its Open RAN-enabled 5G network and laying the groundwork for its global outreach: Its domestic, multi-vendor 5G network currently provides coverage over three spectrum bands (3.7 GHz, 4.5 GHz and 28 GHz) in 550 markets, comprises 10,000 base stations (soon to be 20,000), and supports 10 million customers.

The network isn’t currently virtualized – DOCOMO is working towards that, explained Sadayuki Abeta, head of the radio access network at DOCOMO during a media briefing on Tuesday – but the network elements from its various suppliers all support O-RAN Alliance interfaces for open interconnectivity between the operator’s three suppliers of centralized and distributed unit (CU/DU) equipment – NEC, Fujitsu and one as yet unidentified and soon-to-be-deployed “European” vendor – and a number of radio vendors, including NEC, Fujitsu, Samsung and some “small” Japanese suppliers.

Essentially, DOCOMO has something that is quite unique – experience and knowledge of building and running a sizeable commercial Open RAN-based 5G network (Rakuten Mobile also has an Open RAN-based 5G network but it is smaller in terms of customers supported and sites rolled out). And, like Rakuten with its Symphony operation, is sees value in this experience and knowledge and wants to capitalize on it.

In terms of its international outreach, progress has been measured while DOCOMO has built up its capabilities for potential OREC customers and partners. It issued a white paper last June to outline the potential benefits and challenges that come with Open RAN, and then in October started building its Shared Open Lab in collaboration with its 13 OREC partners (the number hasn’t changed since inception).

Now that lab is ready for other operators to tap into remotely so they can test and try out various multi-vendor combinations to see what might work for them in an Open RAN architecture: In the true spirit of Open RAN, of course, other vendors that conform to the specifications and interfaces can be added.

Abeta believes the lab will be of significant interest and benefit to other operators.

“We opened the shared lab at the end of February so that operators can connect remotely... most operators do not have the experience to do the interoperability testing by themselves, and do not have the experience to integrate the multi-vendor equipment by themselves. By providing this shared lab, they can use our experience. Operators can select hardware, software, virtualization platform and accelerators and set up the test environment remotely... they do not need the space, their own equipment, their own testing technical experts or the time to build their own labs...and the operators that test, DOCOMO can support them.” Abeta also discussed the shared open lab in this recent TelecomTV interview.

So it’s early days for the lab and for the international outreach, but DOCOMO already has one OREC customer in the form of major South Korean operator KT Corp., which is working with DOCOMO and Fujitsu to accelerate its Open RAN deployment. (See KT turns to Fujitsu and NTT DOCOMO to further its Open RAN ambitions.)

And now DOCOMO has its eyes set further afield: It believes that the UK, where the government has forged an Open RAN-based relationship with its Japanese counterpart and already has NEC involved in Open RAN lab trials, could be fertile ground for its OREC offering, along with many of the smaller mobile network operators around Europe that don’t have the resources to develop their own plans and build their own test labs. The US and other Asian markets are also on DOCOMO’s radar.

DOCOMO has clearly witnessed the impact that Rakuten Symphony has made in the mobile market and during the recent MWC22, when each day seemed to bring a new development of some sort, and it wants to remind the world that it, too, has invaluable experience to offer to the Open RAN community. What will be interesting to see is if the number of OREC partners grows in the coming months and if more operators join KT Corp. in working with the DOCOMO ecosystem: It is, after all, still very early days in the eveolution of the Open RAN market.