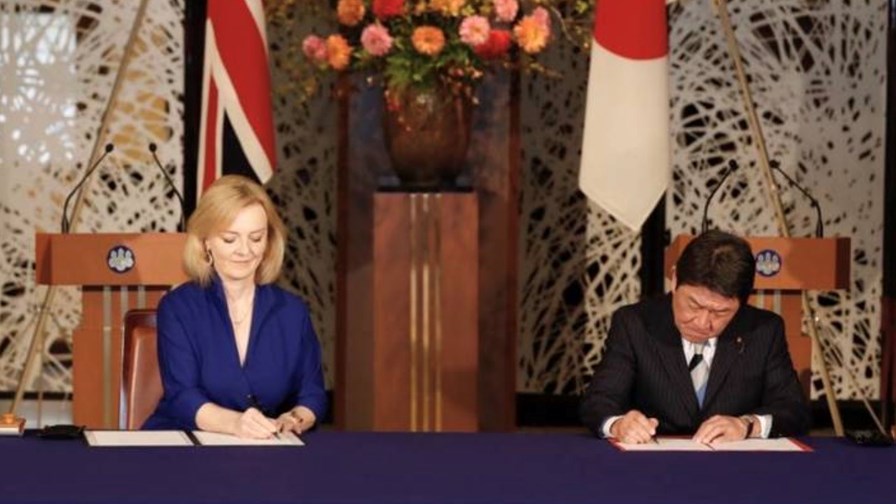 The likelihood that NEC will grab a slice of the 5G action in the UK with its Open RAN-enabled technology, and help fill the gap left by the departing Huawei, has increased in the past few days following the signing of anepoch-making, world-beating, oven-ready post-Brexit bi-lateral trade agreement with Japan (worth a full 2% of GDP in a good year and with a following wind).

Following a visit to Japan by British Trade Minister Liz Truss to sign the agreement, the UK Department for International Trade tweeted: “Japanese tech giant @NEC_jp_pr to support roll out of 5G in the UK. The UK-Japan trade agreement signed today will bring two of the world’s most technologically advanced nations & democratic allies closer together."

Meanwhile, the UK embassy in Japan tweeted: “International Trade Minister Truss, who is visiting Japan, meets with NEC Chairman Endo. We talked about NEC's 5G deployment and collaboration in the UK, including the establishment of the 5G Open RAN Center of Excellence. The UK-Japan Comprehensive Economic Partnership Agreement is expected to further develop digital partnerships with Japanese companies.”

Since the banishment of Huawei by the UK authorities in the type of government U-turn that has become all too common for beleaguered Brits, the obvious beneficiaries of upcoming 5G-related deals have been European companies, including Ericsson and a revivified and expansive Nokia.

However, other companies are increasingly eager to play their part in competing to make 5G in Britain a reality. Samsung of South Korea is making a play, but the road is more open to Japanese comms companies that will be able rapidly to take advantage of the new trade deal.

In recent months NEC has upped its game where 5G is concerned, thanks in part to its Open RAN developments with Japanese competitive operator Rakuten Mobile, and the company's involvement in the UK market – including the establishment of an Open RAN lab, it seems – could be a portent of things to come, not only in Britain but also across much, if not all, of Europe.

As the doors close on Huawei – Italy, Bulgaria, Kosovo and North Macedonia have just joined those refusing to deploy Huawei kit in their 5G networks – they open to friendlier countries, including Japan and South Korea.