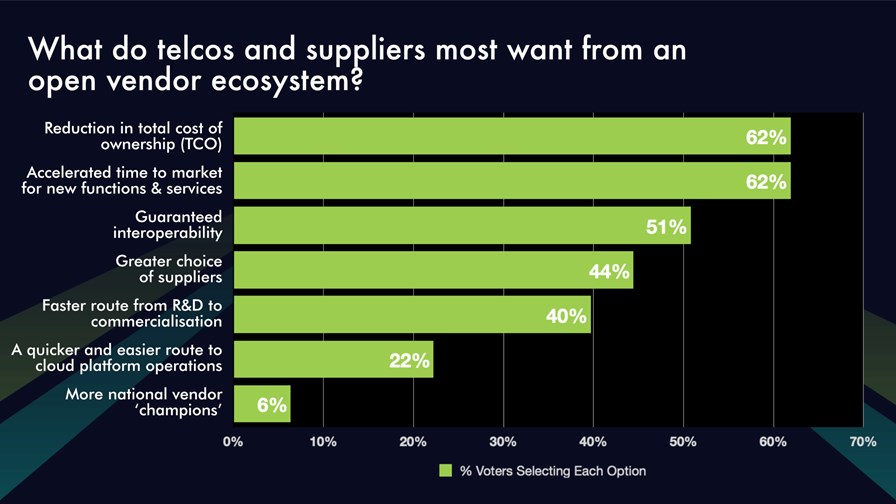 Reducing costs and speeding up the time it takes to get new services and functions into play are the most important deliverables of an open vendor ecosystem, according to the results of a poll conducted during the recent DSP Leaders World Forum 2022 event, which took place in Windsor, UK.

For those supporting and driving the progress of open, disaggregated networking, there are many positives that can come from enabling a true multi-vendor ecosystem based on open interfaces, with a broader selection of potential technology suppliers often cited as a key driver.

So as part of the forum session Capitalising on an Open Vendor Ecosystem, we asked our in-person and online attendees: What do telcos and suppliers most want from an open vendor ecosystem?

Respondents could select as many of the options they deemed appropriate and, as the results of the poll show (see graphic, above), it seems that having a greater diversity of vendors is not what the industry wants most from an open ecosystem. Instead, as is often the case, it’s the money that’s talking the loudest...

Of those who voted, 62% believe a reduction in the total cost of ownership (TCO) of a network is of paramount importance, along with an accelerated time to market for new functions and services, which also garnered support from 62% of voters.

Only 44% of respondents believe that having a greater choice of suppliers is of paramount importance, while a few more, 51%, selected ‘guaranteed interoperability’ as the most important attribute to come from an open ecosystem.

While ‘faster route from R&D to commercialisation’ attracted a decent 40% support, a few potential options were far less popular. Only 22% of voters think that gaining ‘a quicker and easier route to cloud platform operations’ is a major advantage to be gained from having an open ecosystem, while a paltry 6% believe telcos and tech suppliers are desperately hoping to witness the emergence of more national vendor ‘champions’.

The debate will no doubt rage for years about whether developing, deploying, managing and operating open, disaggregated networks will ultimately result in a comparatively lower TCO, but it seems clear this is regarded as a major driver of those supporting open networking developments.