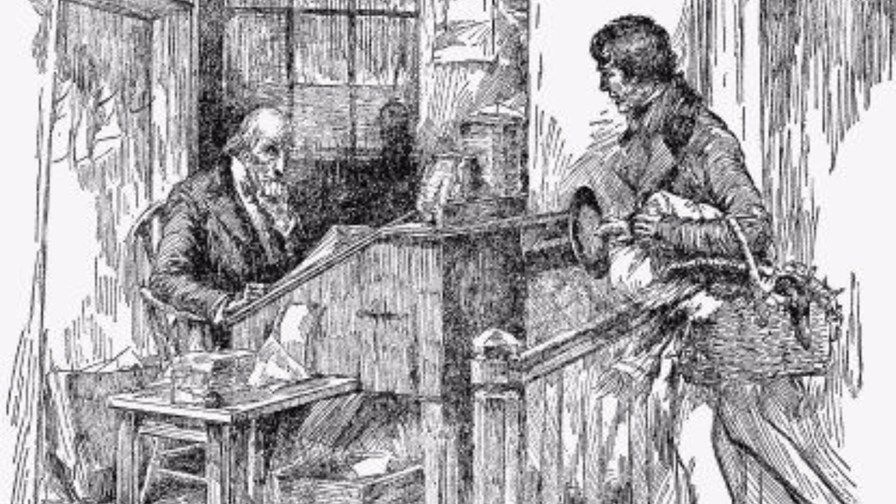 Before Scrooge there stood, or rather there floated, a strange figure. It wore a boilersuit of the purest white on the breast pocket of which was emblazoned a strange cabalistic design that looked like a blue-striped basketball. Cinched tight around the creature's waist was a large leather belt, accoutred with various pockets and pouches containing, gloves, pliers, wrenches, an RF probe, a signal tracer and, wonder-of-wonders, a time-domain reflectometer.

One moment the thing before him seemed young, lithe, clear of countenance and favoured with an abundance of dark and glossy hair, whilst, a trice later it appeared aged, wrinkled, tired and dispirited (if a ghost can ever be said to be such). The spirit seemed to reach into Scrooge's mind and read it for it suddenly shrieked, "You are right to be sore afraid Scrooge. Behold, and see what can be wrought by working at Basking Ridge."

"Are you the creature, sir, whose coming was foretold to me?" squeaked Scrooge.

The apparition spoke again but this time its voice was low, soft and gentle. "Mr. Scrooge  I have here a triplicate signed copy of Repair Order 499466277500981/88722350758/BB showing that sometime just before Thanksgiving two years ago you contacted our offices to complain that your interactive Morse Code engine was suffering a marked degree of peri-discombobulation."

"Now, I am the Spirit of Commsmas Past, last Commsmas Past in fact, and I am here to effect the necessary repairs to the aforementioned apparatus. However, I have now ascertained that I have inadvertently left my RS-232 and lump hammer outside in the prairie schooner. I invite you join me while I retrieve the device."

Scrooge demurred but the spirit settled the matter by putting out it's strong right hand and gently grasping Scrooge by the throat it floated with him through the wall and out into the ether.

Seemingly no more than second later they stood upon an open country road with orange and lemon groves all around and disappearing off into the far distance. "O Spirit", coughed Scrooge, attempting, with no avail, to remove phantom digits from around his Adam's Apple, I know this place. I was a boy here."

"Yes", said the being, "this is the village of Wheatstone Bridge, but long, long ago, even before Bill and Dave were babes in arms, a time of  jolly peons tilling the fields and tending to the citrus harvest. And lo, there is the little adobe school where you learned to speak hexadecimal under the tutelage of Miss Lovelace."

The ghost waved its hand: saying as it did so, "Let us see another Commsmas!" There was a flash of light and Scrooge found himself at the door of an enormous warehouse stuffed to the gunnels with hundreds of bunks rising in tiers six high. "Why, it is the old Nokia bootcamp", cried Scrooge. I spent many miserable weeks locked in here, labouring on alone while the others visited the local taverns and fleshpots. Show me no more! Take me home, I beg you."

No sooner had he uttered these words than he found himself back, exhausted, in his bed. So weary was he that despite his jellied and palsied limbs he fell immediately into a troubled sleep only to be awakened a minute later by twelve tremendous clangs. Once again it was midnight and Scrooge's bedroom was suffused with the pleasantly ruddy glow of a sports arena changing room. On the air rose an evocative perfume redolent of jock strap and athletic embrocation.

Fearfully opening one eye, Scrooge saw before him a massive figure with a huge bald pate and a corporation of prodigious dimensions showing that, spirit or not, the creature enjoyed a healthy appetite. It was dressed in a loose and simple cloth shift coloured in red, royal blue, grey, navy and white. "I am Mr. Sweary, the Ghost of Commsmas Present", screamed the spirit, bouncing up and down on the balls of its spectral feet and leaping into the air now and then, just for the sheer joy of it, "You have never seen the like of me before. We are going to pay a visit to the Scratchits."

Instantly they were transported to a relatively modest dwelling in one of the middling areas of Saratoga wherein dwelt Pearly Scratchit and her family. Standing there, invisible, in the kitchen, they watched and listened as house-husband Bob Cratchit asked of his assembled brood, "Wherever can your mother be and your little foreign friend, Tiny Ben? They promised to have finished canvasing and leafleting and be home by now to help me with dinner."

At that very moment the door burst open and in walked Pearly Cratchit with Tiny Ben on her shoulders. And behind them entered a team of caterers bearing steaming silver chafing dishes and behind them followed a caparisoned chef staggering under the weight of the biggest goose laid on the biggest platter you have ever seen.

Soon the Scratchit household was filled with the smell of delicious food, wines and just a merest hint of spirit. (It seemed The Ghost of Commsmas Present's embrocation was sufficiently pungent as to be able to cross dimensional boundaries).

At last all the dishes and glasses were set out and Pearly Cratchit, plunging a carving-knife deep into the goose's tender breast said, "That's you cooked. Sic semper any Democratic candidate that would dare to stand against me." Upon hearing this noble sentiment, delight arose all round the board, and even Tiny Ben banged on the table with his dictionary.

After the goose with all the trimmings there were Apple and Raspberry pies in abundance, together with BlackBerrys and  Apricots as well as Cherrys and Papayas out of season. And Oranges too, but no-one cared much about them.

Hours later, after the dinner was at last eaten, the Scratchit family drew around the hearth and the house-husband, raising a glass of rather indifferent St Emilion Pomerol, proposed a toast. "Here's to us", he said, "and sod everyone else and especially that dreadful man Scrooge and his old-fashioned sort. There's an election soon and then Pearly's going to fix his wagon."

"Spirit," said Scrooge, with an interest he had never felt before," Tell me if Tiny Ben will ever learn to speak English properly?"

"I see a an abandoned Oxford Dictionary " replied the Ghost, "near the cocktail cabinet in the billiard room, carefully preserved. If these shadows remain unaltered by the Future, well, who knows?"

Scrooge thought on this and then looked intently at the Spirit's capacious robe. "I see something moving beneath your skirts", said Scrooge, suddenly afraid again. With a hideous otherworldly grunt the ghost rummaged amongst the foldings of it nether garments and brought out two well-fed and rather bumptious adolescents. They stood unabashed at the spirit's feet and sneered up at Scrooge.

"These", said the spirit, "are Sergey and Mark. They are milksops now but they growing fast and will soon take every crumb of bread from the tables of you and your ilk. Beware them both, and all of their degree for on their brow I see that written which is Doom."

At that point the Spirit of Commsmas Present could contain his impulses no longer and screaming at the top of his translucent lungs proceeded to bound around yelling a series of imprecations and curses which to repeat here would demean the narrative.

At that instant the bell struck twelve and the bounding and screaming and swearing suddenly ceased. Scrooge looked about him for the Ghost of Commsmas Present but it was gone. Then Scrooge, relieved but deafened, suddenly remembered Jobs's prediction and lifting up his eyes, beheld a solemn Phantom, dark draped and hooded, coming, like a mist along the ground, towards him.