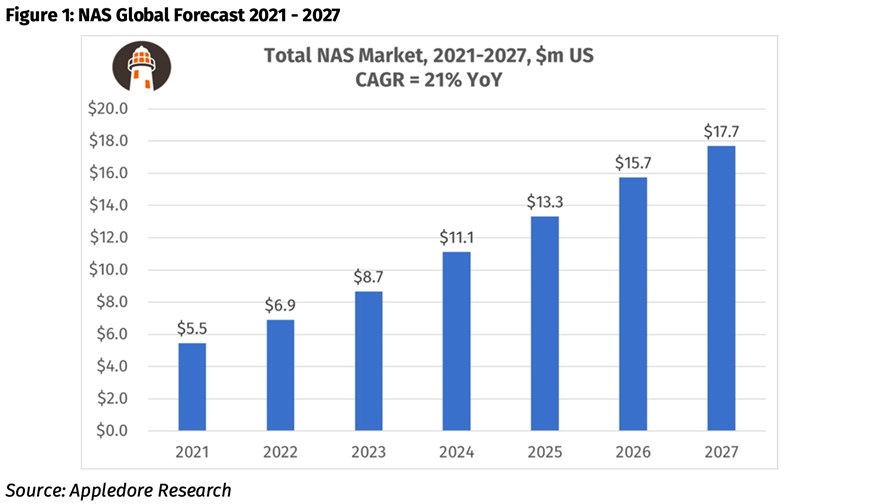 The market for telecom network automation software (NAS) is set to grow in value from $6.9 billion this year to $17.7 billion in 2027 as telcos increasingly embrace automated processes to improve operational efficiency and network resilience while also enabling new revenue-generating opportunities, according to Appledore Research.

In a new report, Market Forecast: Network Automation Software (NAS) 2022-2027, Appledore Principal Analyst Grant Lenahan and his colleagues forecast a 21 per cent CAGR (compound annual growth rate) for the market during the next five years, as the telecoms sector enters a state of more sharpened focus on automation.

Appledore highlighted NAS as “a major distinct category of spend by CSPs” in the coming years, explaining that numerous factors are influencing telcos to “not only increase but also re-structure their software spending plans.” Those factors include the emergence of 5G, disaggregation, cloud, AI, and security, in addition to new or updated business models, all of which play a role in the shift by CSPs towards more automated processes.

“Automation underpins operational efficiency, but it is also a prerequisite for substantial new service provider revenue opportunities that run into the tens of billions, such as private 5G, dynamic enterprise services and security,” noted Lenahan, who led the research.

The potential to broaden revenue streams is a key factor driving CSPs to increasing their spend on NAS systems, as automation is expected to help them efficiently and effectively provision a plethora of services, such as private networks, network slices, and dynamic services chains that interconnect and secure distributed enterprise networks.

“These ‘beyond connectivity’ opportunities all depend on highly automated operations from the start – not as a later operational improvement once (if!) demand takes off,” notes the Appledore team.

The use of automation software will also help to reduce operational costs and help tackle the increasing levels of complexity that come with the deployment of next-generation technology, such as disaggregated access and core networks.

By 2027, Appledore expects domain management to be the biggest single segment in the NAS market, attracting a third of all spending, but as a mature part of the market its growth will be relative slow during the forecast period, while emerging segments, such as artificial intelligence for IT operations (AIOps) and component lifecycle management (LCM) are set to grow at twice the rate.

And that means greater competition for the operators’ dollars. “The market for network automation is in transition, with traditional telecom software suppliers now seeing competition not only from start-ups but also from major players in enterprise IT,” Lenahan noted.

Appledore Research concluded that the winners in the NAS market will be those that achieve “quick transition to forward-looking products, help their clients manage risk in this journey and communicate the value clearly.”

Many industry players are eyeing a piece of the pie, including Hewlett Packard Enterprise (HPE) with its freshly launched RAN Automation suite of software, which promises to help mobile network operators embrace zero-touch operations. (See HPE takes a step towards the Open RAN RIC with automation software launch.)

And many companies, including the likes of Red Hat and Netcracker, are already offering AIOps and other automation tools to telcos in an effort to catch the growth wave in the market at a time when automation and AI are seen as the most effective contributors to 5G service capabilities and ROI for CSPs, according to a recent TelecomTV poll. (See AI and automation offer best hope for improved 5G ROI, services: Poll result.)