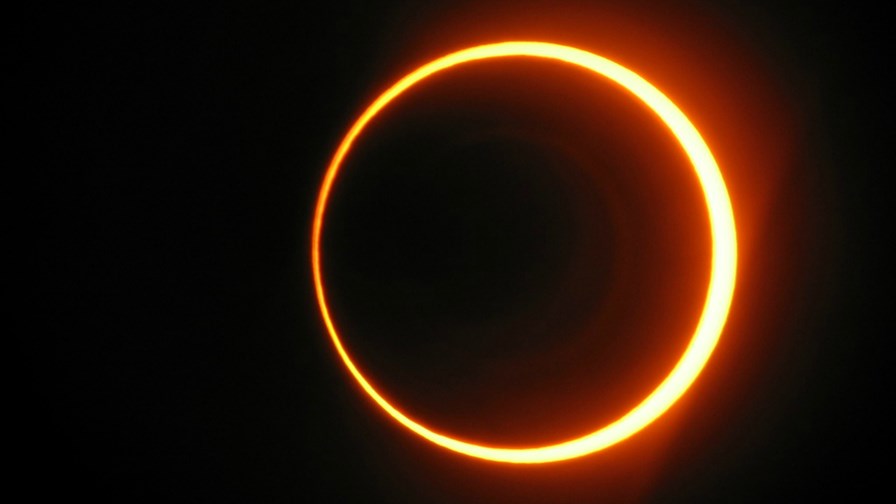 When I was a kid avidly reading exciting tales of deep sea divers battling giant squids, spacemen taking trips to Mars and explorers making a perilous journey to the centre of the earth and other such derring-do, I soon realised that one sure-fire literary device to get the heroes out of a particularly dicey situation that the author had boxed them (and himself) into was to engineer an unexpected total eclipse of the sun.

You know the idea: The hero, his comedy chum and perhaps, but rarely, a heroine (after all, in those days books like these were sold as "Adventure Stories for Boys") are tied to posts in some city on a lost continent and are about to be sacrificed to the Sun God.

The natives, whilst cruel and cunning and remarkable architects to boot, are also backward, ignorant and despite having built massive pyramids in the jungle are strangely lacking in any sort of knowledge of astronomy or mathematics. The hero is not. He knows an eclipse is due just as he is about to be eviscerated. He commands the sun to go out. It does. The natives are terrified. They realise that the hero is a god and that their leader, usually an evil witch doctor, is a charlatan. They rise up and kill him, free the prisoners, load them up with gold and jewellery and pack them back off to home to England, home and beauty where fame and fortune await. Quite how the hero just happened to know or remember that the track of totality would cross that exact place at that exact time - and that the sky would be clear - was never explained and the readers didn't care.

Of course we have long known exactly where and when total or partial eclipses will happen although we still can't do anything about the weather except make it worse. There are millions of fervent eclipse fans around the world and a lot of them will travel to the US to join huge numbers of American enthusiasts who will go to sites along the main track of the event, which on this occasion, crosses much of the rural US.

For four or five days either side of the eclipse (which will actually happen on August 21) enthusiasts in their hundreds of thousands will descend on small towns across states from South Carolina in the east to Oregon in the west. In many ways that's good. Local economies will get a brief but very welcome boost. Cafes, diners, bars, motels and hotels have already increased their prices, in some cases by tenfold or more. Local newspapers and websites are full of news that rooms normally cost U$50 or $60 a night are going for $500 or $600 a night between August 18 and August 25. Money will be paid because eclipse aficionados are willing to pay it and total eclipses are infrequent events.

That's the upside. The downside is that the communications infrastructure in rural settlements in states such Tennessee, Kentucky, Kansas, Nebraska, Wyoming and Idaho, which is not necessarily particularly good or cutting-edge anyway, will come under intense pressure that could bring down entire local systems.

The demand for mobile services in the small towns that lie along the line of the eclipse will be huge. Furthermore, the path of totality often passes five miles or more away from the nearest built-up area and crosses open countryside where there is almost no voice coverage, never mind anything as exotic as mobile data. Visitors will expect to be able to use their cellphones and apps such as Facebook, Instagram and Snapchat as usual. They'll expect to be able to stream the eclipse live, but they may not be able to do anything of the sort.

Bring on the COWS, boys

Thankfully though, because the timetable for the eclipse is immutable, many rural authorities have been proactively planning to takes advantage of the financial windfall that will come with "darkness at the break of noon" as Bob Dylan has it.

Local and national providers of cellular service have been lobbied and the Big Four US carriers, AT&T, Sprint, T-Mobile and Verizon are rolling out "surge capacity" temporary infrastructure. These facilities rejoice in the name of 'COWS and 'COLTS'. COWS are 'Cells on Wheels' and COLTS are 'Cells on Light Trucks'. Excellent. AT&T says its surge capacity infrastructure will increase mobile comms capacity by "more than 300 per cent".

Hopefully that will be enough, but given that pre-bookings indicate the population of some small towns will increase by up to 1000 per cent, there could still be outages. However, if there are any, they should be quite short. The period of totality only lasts for between two and three minutes depending on from where it is being observed and the entire event (the first total eclipse to cross the continental US in 26 years), takes an hour or so.

Scott Mair, the Senior Vice-President of Network Planning and Engineering at AT&T commented, "The stress point is going to be at the individual cell site at the moment of viewing [of the total eclipse] and that is where we will be augmenting capacity. It's in the best interests of the service providers to be there, They want coverage for their customers."

And when the light returns, network stress is relieved and things go back to normal, the COWS and COLTS will be rounded-up and driven back to their home ranges. "Don't try to understand 'em, just rope and throw and brand 'em.”

This means that telecoms infrastructure in the small rural towns that briefly found themselves in the limelight of the solar twilight, as it were, will revert to the status quo ante. Once the circus has left town all they will be left with is the hope is that their access to much better fixed and mobile infrastructure, for which they have been waiting so long, will be in place before the next total eclipse in 2024. However, as this will cross parts of Mexico and Canada and not the flyover states, they are unlikely to be anything more than a temporary priority.

By the way, Montana, "Big Sky Country" (and it certainly is) is on the track of totality but so underpopulated is that beautiful state that no human will see it. It will cross a swathe of country so remote there are no roads, no towns, not even any named areas - and certainly no cell phone coverage. A few bison might decide to take a nap when it gets dark unexpectedly early, but we won't know if they do or not. ​