Two pints of lager, a packet of crisps and 3G coverage, please 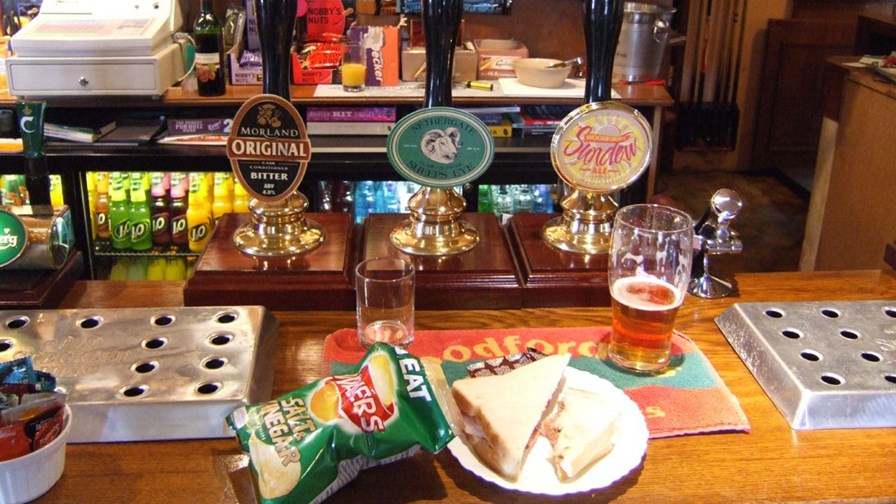 The pub: bedrock of British society since the invading Roman hordes brought their retail experience to these shores 2,000 years ago and some enterprising Saxons decided to ditch the wine in favour of local ale. Hence the tabernae became the tavern and the rest is history, and a rollicking good history at that.

The mobile: disruptor of British society since technologists and marketers from West Coast USA brought their magic touch to Europe’s GSM mobile industry and reinvented the smartphone as a mass market pocket computer. Hence the hot spot became the not spot and a legion of unhappy and mostly rural inhabitants rose up in anger at being denied their human right of being able to use their smartphones wherever they want.

Top marks, then, to UK operator Vodafone for being the first to recognise the link between the pub and the mobile phone. Today, Vodafone has announced that it is “pouring” some of its £2 billion of investment in our network and services into a new pilot programme designed to bring reliable Vodafone indoor 3G coverage to a number of pubs around the UK. (The puns come thick and fast from Vodafone’s PR team, who presumably have done some serious hands-on market research here; the headline of their announcement is worthy of TelecomTV itself: “Don’t let ale-ing signals get you down: Connecting your local pub so you don’t get a bitter reception”).

The pilot – officially known as the Rural Community Pub programme – is part of the telco’s larger Rural Open Sure Signal initiative (Sure Signal being Vodafone’s brand name for its indoor femtocells, one of which sits underneath this desk and is the only reason I can make calls from my non-London location – which is the definition of rural these days).

However, despite Vodafone doing more than its competitors in this area, we do have some concerns. First, Vodafone says the programme will reach a “raft of great locals around the UK”, yet only four pubs are covered in this pilot – in deepest Norfolk and the northern extremes of Wales. Not exactly a major programme then. And how much of the £2bn is being “dripped” into this? How much does it cost to install four femtocells? Probably less than the cost of a round at TelecomTV’s local in the City of London.

“We get so many people coming from cities, who assume they can pick up signal here, but can’t,” said Paul Gorthian, landlord at The Cross Keys in Dilham, Norfolk. “In the past we’d have people coming in here because we advertised free cloud Wi-Fi, but when that broke, they’d leave.”

Vodafone’s PR team carefully made the “c” in cloud lower case, but chances are pretty high that The Cross Keys’ WiFi hotspot was supplied by arch rival and BSkyB-owned The Cloud.

Which brings us to the second concern: 3G. I mean, for goodness sake, this is supposed to be the age of 4G (with 5G hurtling towards us like an unstoppable express train), so why 3G? Perhaps that’s all we rural citizens deserve; perhaps we’re not worthy of having city-class communications?

So we can all trudge out to the pub and make a call, receive a text or two, and get online with 3G speeds. Whoop-de-doo. Meanwhile, UK broadband ISP TalkTalk is planning its own LTE-based femtocell network, in partnership with Telefonica (having dumped Vodafone last year) and using 3.3MHz of 1800MHz FDD spectrum it bought via auction from Ofcom back in 2006 for just £150,000 (via Opal Telecom, when it was part of the Carphone Warehouse group). According to TalkTalk’s Head of Mobile Innovation, Martin Wren-Hilton, speaking at MWC earlier this year, their custom femtocell can support speeds of 16Mbit/s downstream with coverage up to 60 metres, and is VoLTE compliant. This all depends on whether or not it can legally use the former DECT guard-band spectrum in the UK for LTE operation.

Is there life outside the pub?

And here’s the third thing. “We want to call time on no mobile coverage, not have time called on the pub and village life,” said Jorge Fernandes, CTO of Vodafone UK.

Er, idea for you, Jorge… don’t you worry about village pubs closing down, you’re not in the Licensed Victuallers business. Worry more about lack of mobile coverage throughout the village and rural areas. Why not extend your mobile network and provide more macro cell sites and/or a proper small cell rollout? That way, we can all utilise our Vodafone contracts when and wherever we choose.

According to Senza Fili Consulting, a three-sector LTE macro site costs around $75,000 in capex, with the bulk of that being planning, installation and commissioning. An equivalent outdoor LTE small cell is around $20,000. So yes, we know network infill is an expensive undertaking, and it’s obvious why cheaper models are being piloted (the capex costs for an indoor 3G/wifi femtocell fall to around $11,000), but are these ad hoc schemes sustainable and viable in the long term? What if the pub closes down – as so many of them are doing at the moment? Having a femtocell hanging on the wall next to the dart board isn’t going to radically change the fortunes of a pub business.

“My only worry is people cheating on the pub quiz!” japed convivial landlord Paul Gorthian. Don’t worry Paul, that’ll be the least of your worries. Have you ever popped into town and visited one of the major coffee shop chains? Packed full of students and business types spending hours at a time eating up the internet bandwidth whilst nursing a filter coffee or glass of tap water. That’ll be The Cross Keys soon, Paul. A little less “Cheers”, a little more “Friends”. You won’t be seeing much financial upside, unlike Vodafone.

Good effort, but we expect so much more from the UK’s one-time pioneer mobile operator.