Intel finds the transition to Industry 4.0 is still problematic for most factories 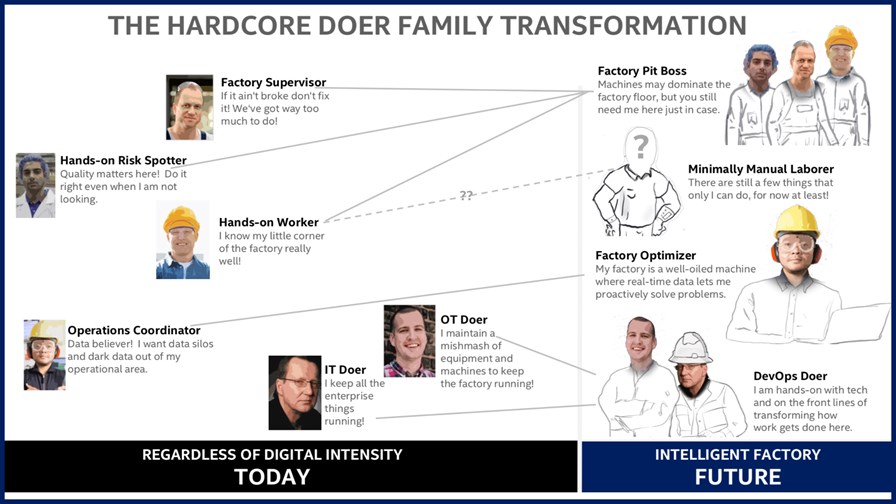 The Industrial Internet, IIoT, Industry 4.0 – or Industrie 4.0 for us Europeans – is a much-touted use case for telcos looking to push IoT ahead of 5G and break into lucrative vertical markets. The reality, however, is that only a tiny proportion of industrial companies have actually changed their operational systems and embraced the concept of the smart factory.

Manufacturing is becoming more digitally intense, and the promise of intelligent or smart factories – where analytics, artificial intelligence and IoT converge to drive decision-making and optimise productivity – is real. It’s just that it’s not happening as fast as many would like. To better understand the issues facing manufacturing companies, Intel conducted research that surveyed workers and management to identify the key issues that would accelerate the adoption of smart technologies.

Perhaps not surprisingly, most of the 145 participants surveyed from 133 companies were a long way from the vision of the intelligent factory.

One of the key problems is that there is too much emphasis on technology, and not enough on the actual human workforce. 56 per cent of the obstacles raised in the research related to the culture and leadership of the company. When transitioning to the smart factory, senior managers are often seen as decision-makers and workers just do as they are told – but Intel’s research found that 56 per cent (same figure, coincidental) of participating workers and leaders saw themselves as decision-makers at some level about the future of manufacturing at their companies, and that 98 per cent of workers believed that they had direct or indirect influence over technology adoption and implementation decisions.

Another key negative factor is that most managers don’t actually know what Industry 4.0 means. For many, it’s just a buzz word. Additionally, even those who are the closest to and seemingly most ready for Industry 4.0 seem afraid of letting go of human control in manufacturing processes. Yet the surveyed participants have bold ideas about what the smart factory is and can do for them, and believe much will change over the next two to three years. The vision is there; it’s just the process of implementing it that is still way off track.

“Current manufacturing workers at all levels have expressed a hunger for change and believe that they can and should play an important role in that change,” said authors Faith McCreary and Irene Petrick of Intel. “They believed that the future factory would still need people – although maybe fewer of them and in vastly differently roles. Harnessing this enthusiasm will lead to solutions that are powerful, that have buy-in, and that can be communicated in a way which presents the changes as solutions to the problems workers care about today.”