CEE augmented/virtual reality market to reach $471 million in 2017, driven by consumer and manufacturing spending, according to IDC

Prague – The latest update to the Worldwide Semiannual Augmented and Virtual Reality Spending Guide from International Data Corporation (IDC) forecasts revenue for augmented reality and virtual reality (AR/VR) products and services in Central and Eastern Europe (CEE) to reach $471 million in 2017, reflecting an increase of 262% over the $130 million spent in 2016. AR/VR spending will continue to soar in the coming years, achieving a compound annual growth rate (CAGR) of 133% over the 2016-2021 forecast period and totaling $9 billion in 2021.

"The CEE region is seeing a wide range of successful augmented and virtual reality projects across all countries and various verticals," says Jiri Tersel, senior research analyst at IDC CEMA for wearables and AR/VR. "A few examples include enhanced warehouse management using augmented reality glasses for a wholesaler in Romania; in the Czech Republic, printed natural science textbooks in secondary schools that allow interacting with 3D models of a human body using smartphones; and augmented reality art exhibitions in Moscow."

The consumer segment will be the largest source of AR/VR revenues in 2017, accounting for almost two fifths (38%) of spending in Central and Eastern Europe, including hardware, software, and services. This will be especially pronounced in the virtual reality market. Industry spending will trail consumer spending as virtual and augmented reality applications slowly find their way into everyday use. The largest-spending segments will be discrete manufacturing and process manufacturing, which together are expected to account for more than $100 million in AR/VR investments this year. Over the course of the 2016-2021 forecast period, the consumer segment will remain the largest area of spending, but will lose some spending share to retail, healthcare, and education. Together with utilities, these will be the fastest-growing industries in the context of the overall AR/VR market. 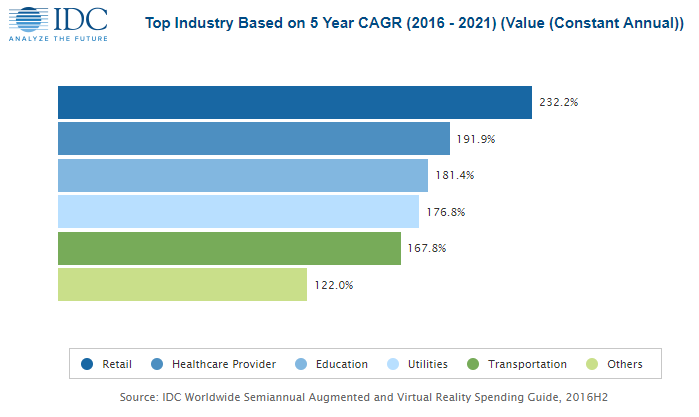 In terms of industry use cases, industrial maintenance (manufacturing), process manufacturing training (manufacturing), and logistics and package delivery management (transportation) will attract the largest AR/VR investments in CEE in 2017. The use cases that will see the fastest growth over the coming four years are lab and field (education), retail showcasing (retail), and utilities training (utilities). Spending in the consumer segment will be dominated by games throughout the forecast period, with both AR and VR games expected to post CAGRs close to 230%.

"From the CEE perspective, AR and VR are quickly gaining traction in both home and commercial settings," notes Milan Kalal, program manager of Internet of Things research with IDC CEMA. "We expect spending on virtual reality systems, including viewers, software, consulting services, and systems integration services, to be greater than AR-related spending in 2017 and 2018, largely due to the consumer uptake of hardware, games, and paid content. However, after 2018, augmented reality spending will surge ahead as industries make significant purchases of AR software and viewers, in order to fully utilize the transformative capabilities of these technologies."

The Worldwide Semiannual Augmented and Virtual Reality Spending Guide examines the AR/VR opportunity and provides insights into this rapidly growing market and how the market will develop over the next five years. Revenue data is available for eight regions, 12 industries, 26 use cases, and eleven technology categories. Unlike any other research in the industry, the comprehensive spending guide was created to help IT decision makers to clearly understand the industry-specific scope and direction of AR/VR expenditures today and in the future.