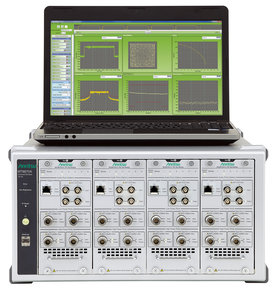 Installing the NB-IoT options in the MT8870A enables evaluation of communications equipment with built-in NB-IoT functions as well as tests of the RF TRx characteristics of modules. These same options are bundled with a PC application supporting signal analysis to assist customers with development work and design testing. Additionally, a fully automatic measurement application is provided for controlling measuring instruments and chipsets at prototyping and mass-production testing. These application software packages can be used to simplify test program creation and automate measurement, cutting customers’ test software development man-hours by about 90%.

Narrowband-IoT (NB-IoT) is the latest standard of wireless technology that has been developed to support IoT devices and services. NB-IoT offers several advantages, including improved power consumption, extended in-building coverage, lower cost and improved security and privacy features. But to be able to meet to growing demand for NB-IoT modules, chipset vendors are looking at cutting the cost of manufacturing by improving measurement efficiency. Anritsu has worked closely with chipset vendors to develop a turnkey system supporting fully automatic measurement. These latest options make full use of optimization technology developed as a manufacturing solution for 2G/3G/4G terminals and have been developed as a multi-device test solution for cutting measurement costs per device as far as possible.

The MT8870A is a Universal Wireless Test Set designed for the mass-production of wireless communication devices, including 2G/3G/LTE/LTE-A, W-LAN, Bluetooth, GPS and FM technologies. Up to four high-performance test units can be installed in one main chassis, with each unit performing completely independent parallel measurements to evaluate up to four wireless communications devices simultaneously.