This growth can be largely attributed to a precautionary measure against the expected implementation of national standard norms by the Bureau of Indian Standards (BIS) for the wearables category in the middle of 2018Q2. In anticipation of this, companies shipped high numbers of units before the BIS implementation in the country. Additionally, e-tailers brought in more shipments to meet the demand coming via various online shopping sales in June and July. The market remains attractive for new entrants, as it witnessed the entry of the new players from the fashion e-commerce, IOT and startups verticals in this quarter.

“After a relatively slow 2017, the market looks like finding its footing in 2018. Companies have increased their marketing spend, exploring alternate channels to sell their devices, and updating their platforms to increase the gamification and maximize the user engagement” says Jaipal Singh, Associate Research Manager, Client Devices, IDC India.

Outside of wristbands, which accounted for almost 90% of the shipments during the quarter, watches with wearable computing also grew 34% sequentially on back of new launches and affordable finance schemes in the channel. In the smartwatch category, watches which can run third-party applications on the device itself, Apple has emerged as a clear leader with one out of every three watches sold in India during the quarter belongs to this company.

Xiaomi maintained its leadership of the market with 46% market share and 31% quarter-over-quarter (QoQ) growth in the 2018Q2. Although, its share had reduced marginally from the previous quarter. Most of its devices are still sold by the e-tailers. However, the brand has now well diversified into retail channel by selling its devices from its preferred partner stores, selective large format retail stores, and its exclusive retail stores in the country.

GOQii remained at 2nd position with healthy 74% annual growth and 36% sequential growth in its shipments. The vendor has taken its engagement beyond the basic application monitoring when it comes to engaging with its user base. Interactive live video sessions by experts, starting a health store and adding brain training games on its platform are some of the initiatives introduced by the vendor.

Titan with its Fastrack’s Reflex range saw a healthy 56% sequential increase in its overall shipments and maintained its position. However, its shipments saw a 45% decline in its annual growth as it channelized its inventory before launching new devices to the market. The brand has an aggressive intent to go ahead with a high marketing spend on traditional media to educate users about the fitness bands in the coming quarters. 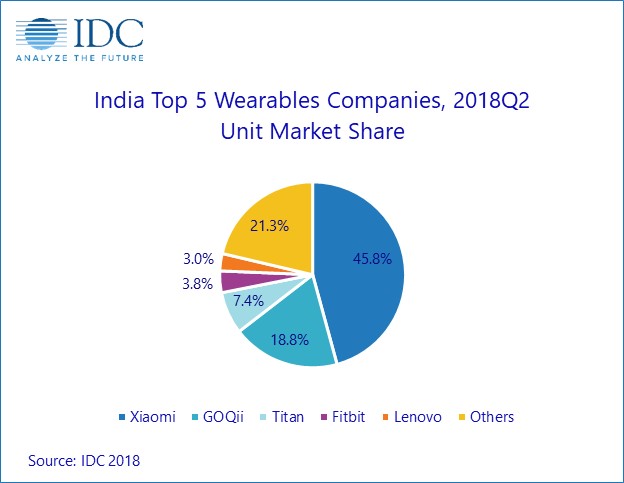 Fitbit replaced Fossil as the 4th largest wearables company as its shipments got quadrupled in Q218 when compared to the previous quarter. Fitbit introduced the Versa watch, adding one more device in its watch portfolio in the 2018Q2. However, bands remain the top-selling category for the brand with Flex 2 contributing more than half to its overall shipments in this quarter.

Lenovo was able to secure a position in the top five after three quarters. It launched three new models to strengthen its position in the fitness band category, which helped the brand to register a strong triple-digit growth in the 2018Q2. .

With the implementation of the product standardization norms for wearables devices in India, IDC expects the long tail of wearable vendors, which includes many small and white label brands, to face the challenge of getting marginalized in the next few quarters. The brands who are aggressive on pricing will be the prime beneficiary of this consolidation.

Commenting on the recent consumer trends, Navkendar Singh, Associate Research Director, IDC India. adds “Today, health is becoming a priority in urban India and consumers are opting for the fitness bands to monitor their routine, and are also comfortable to spend on fitness devices to have a healthy lifestyle. However, large numbers of users are still facing difficulties to see the real value from these devices in absence of any tangible benefits”. He further highlights that “vendors need to develop services ecosystem around it to keep the users motivated and drive the repeat purchase”.