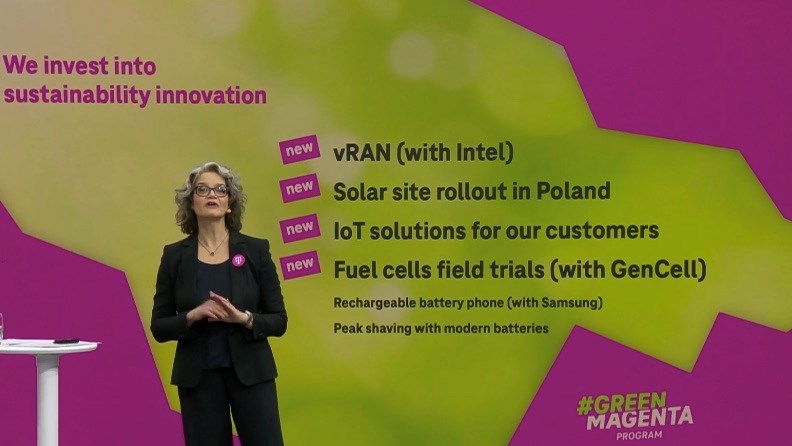 Sustainability is shaping up to be key focal points on corporate agendas at the upcoming MWC22 event in Barcelona, during which giant German operator Deutsche Telekom plans to show off a range of innovative solutions for enhanced energy efficiency in its networks.

Claudia Nemat, Member of the Deutsche Telekom’s Board of Management responsible for technology and innovation, noted during a press conference held on Monday morning that operator intends to showcase a number of key green network developments, including IoT solutions that “help our customers save electricity consumption, waste and water.”

Also on show at MWC22 will be a solution from Israeli company GenCell, which provides fuel cells based on hydrogen and ammonia (See GenCell taps ammonia to slash telco remote site energy costs.) After testing the provider’s equipment in its Tel Aviv facilities, Deutsche Telekom is entering a new phase of collaboration with the vendor by integrating GenCell’s units into its mobile sites in Germany: The idea is to test the kit under “live conditions,” Nemat explained.

She believes the deployment of cutting-edge technology is necessary to make strides towards a carbon-neutral world. Therefore, another goal for the operator is to demonstrate solutions the help businesses enter the circular economy or extend the life of mobile devices to reduce resource waste.

DT has also invested into sustainability innovation within a virtual RAN (vRAN) trial with Intel, and, in a separate development, is rolling out solar panels at 1,000 antenna sites in Poland.

Nemat explained the operator is also exploring “further options for autonomy.” She gave an example with one of its sites in Germany, where the company has integrated wind, solar batteries and, in the future, fuel cells (presumably those provided by GenCell).

“We can smartly adapt supply and demand… As of today, autonomous energy production plays, in the grander scheme of things, still a small role, but I expect this to change over time, depending on technology evolution and also economic requirements,” Nemat opined.

In terms of DT’s own achievements so far, it claims its global production has switched to entirely renewable electricity since the end of last year. While highlighting the milestone, Nemat explained that the company strives to keep its electricity consumption “at least stable” despite the “exploding” data volume. It intends to do so through retiring legacy and innovating with emerging technology options such as vRAN.

DT aims to become carbon neutral by 2025 in terms of its own direct emissions, and to achieve the same for its supply chain and distribution channels by 2040 at the latest: The company claims 85% of its emissions come from its supply chains, “outside our own production facilities.”

Environmental sustainability, and energy efficiency specifically, has been an increasingly important topic within the telecoms ecosystem during the past couple of years. Many operators have made steps towards saving energy, and the path towards a greener future through energy efficiency efforts is set to be one of the hottest topics during MWC22 and beyond.