This time? UK government talks the talk on fibre - all eyes on the walk 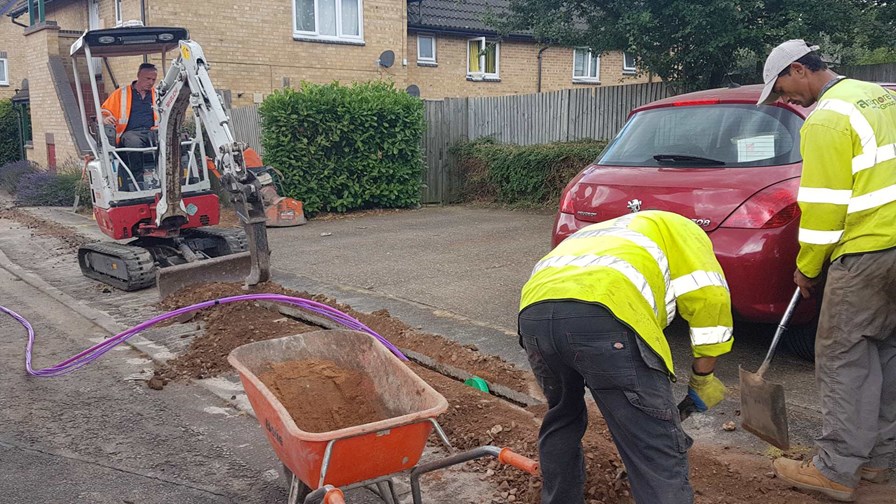 CityFibre digs its way through the suburbs of Milton Keynes

Stung by reports that the UK was perceived as a broadband laggard, with the most recent ranking placing the UK 35th globally, the UK government has responded with an action plan designed to nail the underlying lack-of-fibre problem once and for all (see last week’s related story on 5G: UK faces serious 5G deployment challenges).

It says that it wants all UK new builds to have fibre fitted as standard and that it aims to have the entire country ‘covered’ (with fibre or at least a radio near-equivalent) by 2033.

The copper network is to be terminated at around that time as a final spur to kick the process along. And it’s promising further government measures to ensure speedier competitive roll-out of fibre, with promises to take up the burden of pushing broadband services out to rural areas where it would otherwise be unviable.

The new plan, The Future Telecoms Infrastructure Review (FTIR), has been welcomed by the chairman of the National Infrastructure Commission, Sir John Armitt who says blanket fibering will prove to be an assist for 5G by providing some crucial backhaul capacity.

The overall approach is aimed at boosting large-scale commercial investment in both fixed and wireless networks and the review has been announced as part of the government’s modern Industrial Strategy. This recognises that the ‘old’ policy of getting about halfway to full fibre by 2025 wouldn’t cut the mustard as, at that rate, fibre would only ever reach three quarters of the country and it would take more than twenty years to do so.

The review’s key recommendations involve new legislation to guarantee full fibre connections to new build developments, giving operators a ‘right of entry’ to flats, business parks, office blocks and other tenanted properties to allow those who rent to choose their own suppliers. At present in the UK tenants tend to be tied to the landlord’s arrangements. This has to change.

There’s to be public investment in full fibre for rural areas to begin simultaneously with commercial investment in urban locations.

A new nationwide framework is promised, which, it’s claimed, will reduce the costs, time and disruption caused by street-works by standardising the approach across the country.

Adjacent infrastructure (including pipes and sewers) owned by other utilities such as power, gas and water, it to be opened up to easy access for both fixed and mobile use, while Ofcom is to reform regulation to allow unrestricted access to Openreach ducts and poles for both residential and business use, including essential mobile infrastructure.

The government calculates that equitable nationwide availability will require additional funding of around £3 billion to £5 billion to support commercial investment in the final 10 percent of areas. The often rural areas must not be forced to wait until the rest of the country has connectivity before they can access gigabit-capable networks, it says.

It’s early days, but this does seem to indicate a real change in tone from the government; a determination to stop kicking the political can down the road and instead to make some tough policy decisions on broadband. That Brexit is on the near horizon has probably fortified the decision-making too. That and the fact that France, soon to be seen more as a national competitor rather than as a technology partner has pulled away in the full-fibre stakes, with around 28 per cent penetration compared to the UK’s 4%.

One of the full fibre enablers in the UK fibre stakes is Vodafone. Together with CityFibre (which is digging its way through several cities already) it’s rolling out full fibre broadband in UK city of Milton Keynes, offering customers gigabit service. Last week it showed journalists its suburban market trial of the gigabit service. (see picture above). If and when successful, Vodafone plans to roll the gigabit service out to over a million more UK homes.

The government hopes the CityFibre/Vodafone partnership, and other initiatives like it, will provide an example of a viable model for fibre roll-out - the competitive commercial environment it hopes to foster.

Rather than vertically integrated offerings which find it hard to get to scale in a highly competitive market like the UK, the partnership illustrates a viable wholesale model - CityFibre owns and manages the fibre network, Vodafone has a multi-year exclusive marketing agreement in a particular area. When individual contracts run their course, the residents can contract (if they so wish) with another CityFibre partner for internet access.

It all seems to be working well, according to Neil Blagden, Vodafone UK Chief Operating Officer. The big thing he’d like to see now, he told me, is that someone forces BT to stop calling its broadband offerings ‘fibre broadband’. Because it’s not (as we’ve pointed out many times). Perhaps this time the government’s apparent determination to see ‘real’ fibre roll out in the UK will cause someone high up to have a quiet but forceful word with the Advertising Standards Authority which, for some reason beyond our imagining, has doubled down on its crazy decision to let BT continue with its lie.