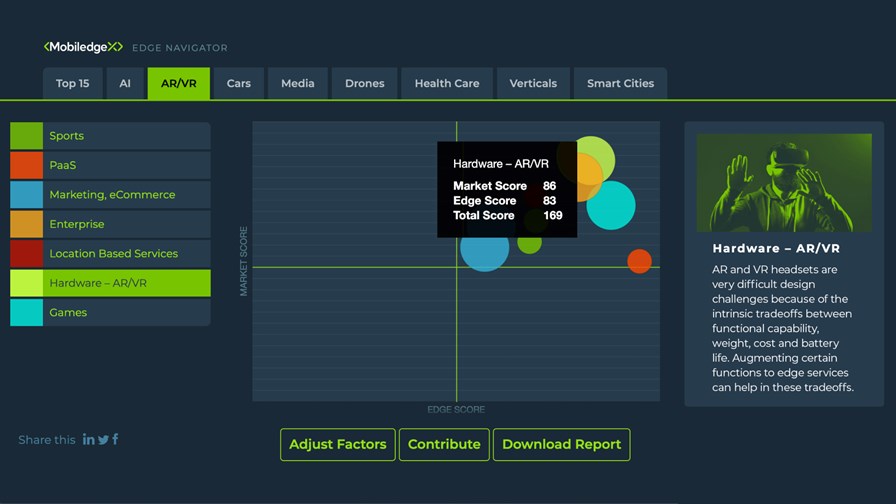 Deutsche Telekom founded start-up MobiledgeX has published more than three years of proprietary Edge Computing use case research and has launched an interactive companion web tool, the Edge Navigator, in an effort to stimulate industry-wide edge knowledge sharing and collaboration. The US-based company is endeavouring to create a marketplace of edge resources and services that will connect developers with mobile network operators to build the next generation of edge applications and devices.

The three-year research effort was initiated by Deutsche Telekom and has been continued by MobiledgeX, based on interviews with more than 200 global businesses, exploring their development plans to understand planned innovation and associated network requirements. The company says the research reveals the current top use cases based on market factors that include market opportunity, venture capital activity, maturity/time-to-market, and network coverage needed. It also delves into edge factors that include criticality of latency, volume of data exchange, geospatial knowledge requirements, hyper-local grouping demands and data residency requirements.

It discovered that multi-player and cloud gaming, V2X communications and Industrial IoT were among the most viable near-term edge use cases. The top 15 edge use cases identified also include geographical information systems (GIS) and positioning, video surveillance, unmanned traffic management, and vision/camera-related applications.

“Edge computing innovation and progress can’t happen in a vacuum and as MobiledgeX seeks to help build a thriving edge ecosystem, it is investing in the critical resources that developers of all sizes will need to get started with edge now,” said Sunay Tripathi, CTO and EVP of Engineering for MobiledgeX.

The Edge Navigator research tool is based on the company’s edge use case research project and offers an interactive market viability test for developers and businesses and application or device owners. Users are able to adjust the edge and market factors driving the model for customisation to a specific vertical or geography, and then see data collected from other developers using the tool. Over time, the company wants to see the Edge Navigator play a key role in real-time conversation around next-generation edge use cases.

“We are exposing years of edge use case research and making it available within Edge Navigator, along with our initial perspectives on the data, to start a larger conversation among the expanding edge community of developers, operators, device makers and technology leaders,” said Eric Braun, CCO of MobiledgeX. “We intend for this collaborative endeavour to help the global edge ecosystem contribute to a public knowledge base where resulting data and insights can be debated, enhanced with other market findings, and most importantly, acted upon for a smoother path to edge success.”

MobiledgeX is also now accepting applications to its six-month early access developer program for app creators and device makers that want to experiment with edge computing performance in live networks. The program provides developers with free access to live edge infrastructure, consultative support and opportunities to network with other edge application developers.

TelecomTV interviewed Jason Hoffman, CEO of MobiledgeX, at this year's Mobile World Congress and you can watch the interview here.