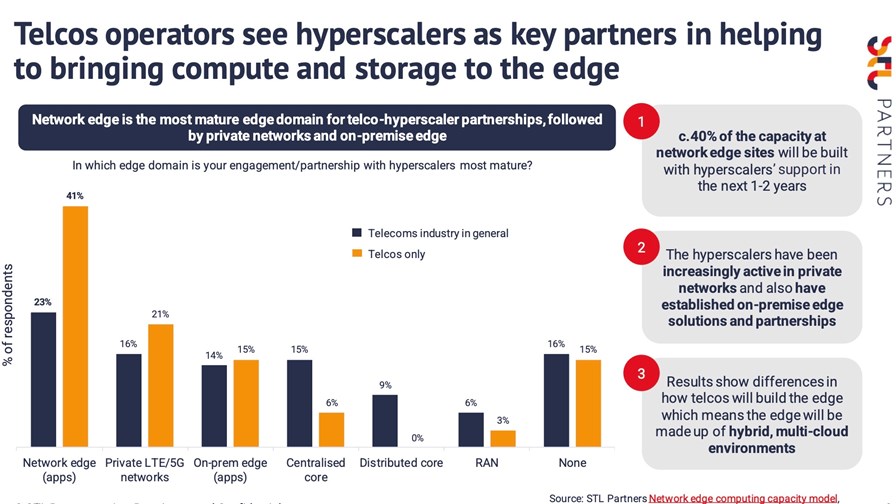 Developing the optimum hyperscaler relationships is key to accelerating the rollout of telco edge resources that have, so far, fallen well short of expectations, according to telecom consultancy STL Partners.

During a recent webinar hosted by STL, the company’s consultant and practice lead, Tim Otto, argued that the value of the overall edge market is estimated to exceed $500bn by 2030 but, as it stands, the deployment of edge computing sites has been slower than anticipated.

An earlier forecast from STL predicted that telcos would have more than 4,000 network edge sites by 2025, but this has now been revised to around 950, reflecting a “quite significant slowdown”, said Otto.

To be able to capture opportunities in the edge computing space, he suggested that telcos “must ensure they’re working with the right partners at the edge to retain that strong return on this significant investment”.

Otto noted that STL has seen accelerated telco collaboration efforts with hyperscalers in the past year, including at the network edge, with the hyperscalers’ established cloud platforms the key attraction for network operators. According to STL, around 40% of the capacity at telco network edge sites will be deployed in combination with support from hyperscalers over the next two years (see chart above).

David Behr, CEO for liquid cloud and cybersecurity at Liquid Intelligent Technologies, a pan-African fibre broadband network provider, concurred that telcos need to collaborate more but admitted that they are traditionally “not strong at partnering – it’s just not in our DNA”. However, he applauded operators for increasingly starting to focus on collaborations because “in this ecosystem there is no way we can build everything ourselves”.

But it’s not only telcos that would benefit from joining forces with hyperscalers. According to Ian Hood, chief strategist at Red Hat, hyperscaler companies have now learned that in order to deliver on some of the capabilities that customers need, they have to partner with telcos and system integrators.

Joanna Newman, global edge computing and 5G principal manager at Vodafone, shared lessons learnt from partnering with different hyperscalers. She claimed that partnering is not about just one killer edge use case. “You can partner with hyperscalers for some capability, at which point of time you’re looking at maturity and commercial fit… You’re partnering with stacks, like Red Hat, to deliver some of that capability, so there’s lots of different types of partnerships that float around”, she said.

Based on Vodafone’s experience of working with various hyperscalers, she added, “the wider ecosystem needs to mature and different hyperscalers bring different capabilities”. For instance, the Amazon Web Services (AWS) console “can be used by anybody at anytime” and a lot of different ideas are being trialled in the AWS ecosystem, noted Newman.

By comparison, Microsoft has a different approach in terms of capabilities that fold into the ecosystem but sometimes can be “far more specialist and a little more well developed, so they’re targeting very specific use cases as opposed to general ones”, she explained.

The edge journey is “an early story”, according to Newman, but Vodafone is seeing success – both from partnering with AWS and Microsoft. “Our self-built [stack] as well – that’s been hugely successful in the specific segments that we’re exploring it for,” she explained.

Its Business unit continued in the same direction later that year, collaborating with Microsoft to provide new end-to-end, cloud-based services that will leverage 5G, edge computing and IoT capabilities, to support growth and deliver innovative tools for hybrid work.