What’s up with… Proximus, the global RAN market, pureLiFi 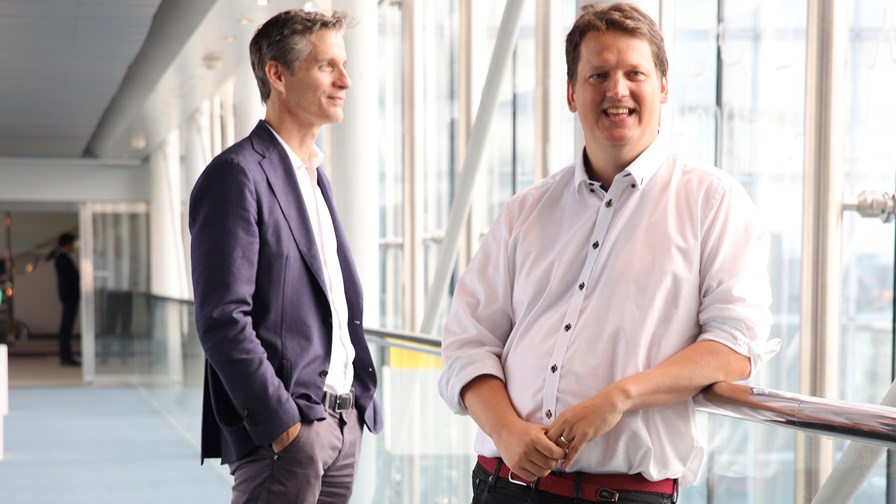 Belgium’s national operator Proximus has joined the growing throng of telcos making a concerted effort to court the SME community. It has teamed up with fellow Belgian outfit Odoo, which has developed a suite of digital solutions that helps small businesses with their day-to-day operations, such as managing customer relations, sales, e-commerce, accounting and human resources. The telco says Odoo’s solutions “complement the tools offered by Proximus through Business Booster, a “range of digital and coaching solutions to help SMEs and the self-employed develop their online presence and boost their visibility on digital platforms”. The agreement was sealed by Proximus CEO Guillaume Boutin and Odoo founder and CEO, Fabien Pinckaers (pictured, above). For further details, see this announcement.

The radio access network (RAN) equipment market is set to be a $40bn-plus annual market for the foreseeable future, despite slowing growth in some major markets, according to the forecast team at The Dell’Oro Group. The market is set to be worth more than $41bn this year and, despite “the unusual uncertainty surrounding the economy, the war in Ukraine, the supply chains, and China’s zero-Covid-19 policy”, the “underlying fundamentals remain healthy”. The RAN markets in China and North American, both of which are very large, are set to peak this year but not to the extent that the market would dip below the $40bn mark within the current five-year period. Read more.

Light-enabled connectivity specialist pureLiFi has secured £10m from the Scottish National Investment Bank to proceed with a global rollout of its technology that uses light to transmit data (instead of radio frequency systems, such as Wi-Fi and 5G). The Scotland-based company will use the funding to invest in innovation and what it dubs “industries of the future”, alongside the creation of high-value jobs and opening up additional markets, such as mobile phones, tablets and other devices. According to pureLiFi, its technology can provide “more reliable wireless communications with unparalleled security”. It was previously trialled in Scotland in 2018 – see LiFi has long been upcoming, will 5G be its spur?

Amazon Web Services (AWS) has launched AWS Cloud WAN, a cloud-based service that “makes it easy to build and operate wide area networks (WAN) that connect your datacentres and branch offices”, as well as multiple virtual private clouds (VPCs) in multiple AWS regions. With the service, it targets enterprises that use resources running in different locations: on-premises datacentres, branch offices and in the cloud. The company claims that one of the main benefits is that it is not necessary to configure and manage different networks individually, as cloud WAN delivers “a complete view of your on-premises and AWS networks to help you visualise the health, security and performance of your entire network”. Find out more.

Predictably, the Twitter/Elon Musk situation is getting messy. Following Musk’s announcement earlier this week that he was pulling out of the deal to buy Twitter for $44bn because allegedly the company didn’t provide his team with the information it needed, the Twitter board has decided to sue the billionaire businessman. The social media giant’s chairman, Brett Taylor, tweeted: “Twitter has filed a lawsuit in the Delaware Court of Chancery to hold Elon Musk accountable to his contractual obligations.” Lawyers will get nice bonuses out of this saga, but it’s hard to see who else will benefit.

Tony Staffieri, CEO of Canadian operator Rogers Communications, has apologised for the “unacceptable” network outage at the end of last week, which left millions of users (including emergency services) without access to telephony and internet connectivity for several hours. “This outage caused real pain and significant frustration for everyone. Canadians were not able to reach their families. Businesses were unable to complete transactions. And critically, emergency and essential calls could not be completed,” he noted. Now, he insisted, the telco provider has to “make things right” and he pledged that “Rogers will make every change and investment needed to help ensure that it will not happen again”. He went on to say that the company will implement what is needed to “ensure that 911 and essential services can continue, no matter what outage may occur”. The outage led to a probe by the Canadian Radio-television and Telecommunications Commission (CRTC), raising concerns over the company’s plan to acquire rival Shaw Communications.

Foxconn, the Chinese contract manufacturing company that assembles most of the world’s smartphones, intends to invest 9.8bn yuan (CNY) ($1.45bn) in China-based chipmaker Tsinghua Unigroup to advance its presence in the semiconductor industry, reported Nikkei Asia. According to a separate report from Reuters, Foxconn had already invested 5.38bn CNY ($798m) through a subsidiary.

Satellite communications service provider OneWeb has spoken out against plans for the 12GHz band to be used for terrestrial 5G by Dish Network and RS Access, stating that approval of the frequency would disrupt non-geostationary orbit (NGSO) broadband in the US. The company has sent a letter advising of its warnings to the US Federal Communications Commission, adding to an earlier cautionary analysis from SpaceX. Read more.