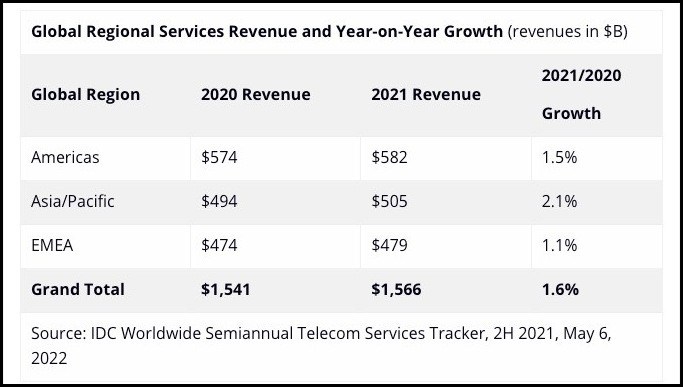 The global telecoms services market, a Canadian mega-merger and a disruptive legal case are the active ingredients in today’s news smorgasbord.

The global market for telecoms and pay TV services grew by 1.6% to $1,566 billion in 2021, with service providers in the Americas generating $582 billion, CSPs in Asia-Pacific generating $505 billion and those in the EMEA region generating $479 billion in sales last year, according to IDC. The research firm expects the global market to grow again slightly this year to be worth $1,588 billion. "The economic recovery in 2021 has boosted the growth of the market and resulted in higher-than-expected growth rates, but the same forces that pulled the market up can also push it down," noted Kresimir Alic, research director, Worldwide Telecom Services at IDC. "Much like other markets, this market is not immune to changes in economic trends and forces such as inflation and recession might quickly change the shape of the curve. The inflation is already happening, and the economies have started to slow down – for that reason our view of the market remains cautiously optimistic." Read more.

Canadian operators Rogers Communications and Shaw Communications have hit a regulatory speed bump on the road towards their planned C$20.4 billion (US$15.8 billion) merger, which was first announced in March last year. The deal is being referred to Canada’s Competition Tribunal by the Commissioner of Competition, who is opposing the merger. As you’d expect, Rogers and Shaw are still pushing their case and say they are offering to sell Shaw’s mobile services business, Freedom Mobile, to allay competition concerns. Read more.

BT was dealt a blow last Friday (6 May) when the Court of Appeal dismissed the UK operator’s efforts to halt a £600 million class action compensation claim on behalf of 2.3 million landline-only customers that the UK telco allegedly overcharged. The court rejected BT’s request for the proceedings to be “opt-in,” which would have meant every one of the customers who wished to join the claim would have needed to be signed up before the legal action could proceed, the Collective Action on Land Lines (CALL) campaign stated. Justin Le Patourel, a claimant who is leading the case on behalf of the customers, welcomed the court’s decision, adding that “asking people to sign up to a legal process which they don’t understand and which has an uncertain outcome, would almost certainly have led to low levels of engagement. This would have made it impossible to secure redress for those affected. Our case, that BT overcharged landline customers, many of whom were elderly and vulnerable, over the course of several years, is very strong.” If successful, the case will require BT to pay £500 in compensation to each affected customer. In response, BT noted it will “vigorously defend itself against the class action claim, which accuses BT of anti-competitive behaviour towards its landline customers.” The operator expressed disappointment for “being drawn into speculative litigation on a topic Ofcom considered more than four years ago. At that time, Ofcom’s final statement made no finding of excessive pricing or breach of competition law more generally.” According to BT, the claim is targeting BT for implementing “a voluntary commitment to reduce prices for customers that have a BT landline only and not to increase those prices beyond inflation (CPI)”. The commitment it refers to is a decision to reduce prices for landline-only customers made in October 2017 after Ofcom’s review, but the claim led by Le Patourel demands compensation for charges made between October 2015 and April 2018.

The termination of mobile text (SMS) messages related to multi-factor authentication processes is big business for telcos and is set to generate $27 billion in revenues this year, up from $25 billion in 2021, according to a report from Juniper Research. Read more.

Infinera and Ericsson took the accolades at Deutsche Telekom’s Partner Summit for Green Future, held last week. In a LinkedIn post about the Summit, the operator’s Executive Board Member for Technology and Innovation, Claudia Nemat, noted that she handed out Green Future Best Practice Awards to the vendors: Infinera was the winner in the category ‘Contribution to reduce DT energy consumption’, while Ericsson picked up the award for ‘Reduction in DT scope 3 upstream (supply chain) emissions’. Nemat noted there was no winner in the ‘Reduction in DT scope 3 downstream (customer) emissions’ category, as “the level of maturity is not yet there. It must be an encouragement for all of us to work even harder!”