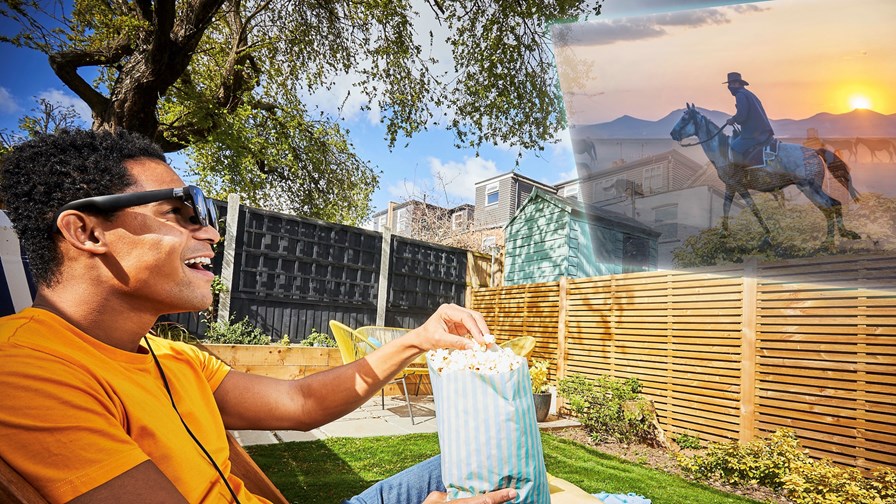 An artist's impression of the Nreal AR set-up.

Some augmented reality action in the UK, a new round of funding for an alternative mmWave 5G vendor and a reach for the stars by NTT are at the front of today’s news queue.

EE, BT’s mobile operation, has announced a partnership with augmented reality (AR) technology specialist Nreal to bring its AR glasses to the UK market. “The move forms part of EE’s ongoing commitment to provide customers with exciting experiences from the world’s most innovative companies,” notes the operator, which says the developer’s Nreal Air boasts fine-tuned audio and a massive 201-inch expanded Full HD virtual display. “When combined with a compatible smartphone connected to EE’s 5G network, the glasses open-up new possibilities for mobile gaming via the cloud as well as streaming high-definition movies and TV shows,” notes EE, adding that it’s “perfect for the 1 in 5 Brits who state that watching videos and online gaming via a giant virtual screen on the go is what most excites them about Augmented Reality.” See this press release for more details.

Japan’s NTT has formed a joint venture with SKY Perfect JSAT that will “launch a novel integrated space computing network to aid the realization of a sustainable society.” The JV will “take on the challenge of building new infrastructures in space, where business led by the private sector is expected to grow in the future, and contribute to the creation of a sustainable society.” NTT added: “By taking on the challenge of creating new infrastructures, starting with the optical and wireless communication network to be built in space and the mobile network to be built in the stratosphere, the joint venture will contribute to the development of the global space industry and the realization of a sustainable society.’ Read more.

Research house Telegeography is predicting significant investment in subsea cable infrastructure during the next few years as hyperscalers “shift their position from generating demand to generating supply.” It believes planned new cable investment could exceed $10 billion during the  2022-2024 period. “Our research has shown constant advancement year-on-year, as pressure for bandwidth continues to grow,” noted Alan Mauldin, Research Director at TeleGeography. “Content providers' international bandwidth growth has accelerated as of late. Companies like Meta, Microsoft, and Netflix have millions of users who are driving up demand every day.” You can find out more in this blog, which also includes subsea cable maps.

Nokia has launched a Private 5G Open Lab in Seoul, South Korea, to “showcase its technology and encourage the development of 5G private wireless networks” in the country. The vendor says the lab will “support Korean enterprises, communications service providers (CSPs) and partners in leveraging 5G private wireless networks to acquire new capabilities and operational efficiencies” and “offer training to partners and demonstrations for customers.” Read more.

Internet2, Duke University, DISH Wireless and Cisco have launched a “neutral host network pilot for higher education institutions” using Citizens Broadband Radio Service (CBRS) shared spectrum. The partners will set up a trial neutral host network this summer that will “integrate Duke University’s private network, powered by Cisco’s Private 5G as a service platform and Internet2’s upgraded fifth-generation national research and education network, with DISH Wireless’ 5G network.” According to Tracy Futhey, VP and CIO at Durham, North Carolina-based Duke University, “Every college and university has experienced dramatic increases in wireless needs from our mobile-first communities. Rather than providing two separate infrastructures throughout our campuses — cellular and Wi-Fi — the holy grail has always been for a single, common network delivering both cellular and high-speed private Wi-Fi. The recent availability of CBRS, together with our collaboration with Internet2, DISH Wireless and Cisco, makes this vision a reality by delivering a private Duke wireless network over the carrier-grade cellular infrastructure that stretches throughout our campus.” Read more.

The European Commission has approved, under EU State aid rules, a €2 billion Italian scheme made available through the Recovery and Resilience Facility (‘RRF') to help with the roll out of 5G networks. Grants to network operators will help with the deployment of backhaul networks in certain areas and 5G base stations that can deliver “speeds of at least 150 Mbps download and 30 Mbps upload in those areas of Italy which, by 2026, will not be served by networks offering download speed above 30 Mbps.” Read more.