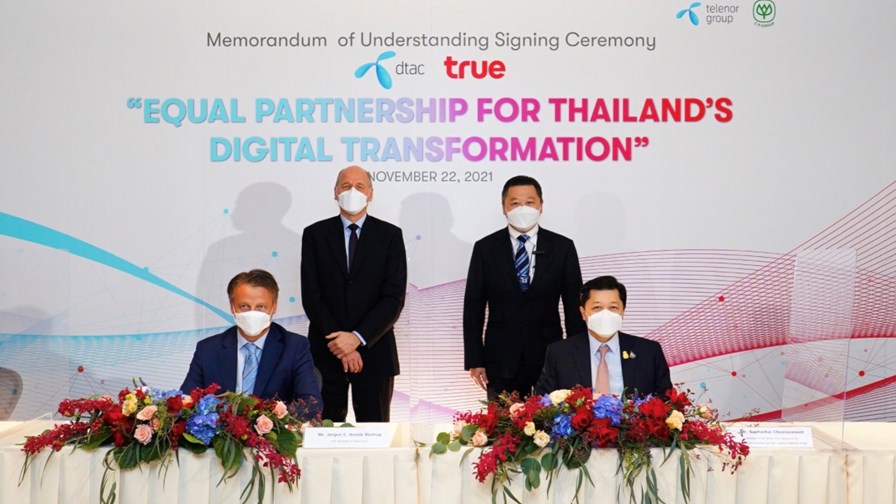 Telenor has struck an agreement to merge its Thai operator, dtac, with rival mobile service provider True, a move that would create the market's biggest mobile player: The move constitutes the latest step in Telenor’s Asian tie-up strategy, but there's a good chance that the proposal will trigger a lot of interaction with regulatory authorities as it would significantly impact the competitive landscape in what is a highly-penetrated mobile market.

The Norwegian operator said it has brokered a merger of equals with True’s parent company, CP Group. to combine dtac with TrueMove H (the name of True’s service operations in Thailand). The companies aim to carry out a voluntary tender offer of shares that will leave each of them with around a third of the merged entity, which will also continue to be listed in Bangkok.

That's "if the transaction proceeds," though...and those are Telenor's own words. The companies aim to finalise things between themselves by the end of the first quarter next year, and then there are the regulatory approvals, and other such hurdles, to deal with. Telenor's announcement includes the usual caveat that "the parties acknowledge that there is no certainty as to the finalisation of the transaction," and in this case, that is certainly true.

The deal would bring together the second and third-largest players in what is effectively a three-player market, which in itself puts a huge question mark over the likelihood of it getting the green light.

Telenor says the merged entity would have around 55 million customers, although figures from the operators' own third-quarter reports put the actual number at a few million below that at present. Either way, the new company would be somewhat bigger than current market leader AIS, which claimed 43.2 million customers at the end of the second quarter. You don't need to be an expert in market competition to understand the potential issues that come with allowing this deal to go ahead.

However, the Thai mobile market is not an easy place to operate, and the regulator is doubtless fully aware of that.

Figures from the National Broadcasting and Telecommunications Commission (NBTC) show that market penetration is above 170%, so there is no huge untapped growth potential, while ARPU is in freefall: blended average revenue per user currently stands at 220 baht per month (around US$6.68), down from THB233 last year and THB241 in 2019. Operators in Thailand have started building out 5G networks, and are therefore dealing with the associated costs of that, and are still facing the financial impact of Covid-19, which has hit the tourist trade hard.

Telenor and True appear to be making a concerted effort to win over regulatory support: As part of the merger agreement, Telenor and CP Group have pledged to “raise venture capital funding together with partners of US$100-200 million to invest in promising digital startups focusing on new products and services for the benefit of all Thai consumers.” (See C.P. Group and Telenor Group support True and dtac in exploring the creation of a new telecom-tech company.)

It's not much of a stretch to see such a move as an attempt at a sweetener.

It's also tempting to assume that a company as experienced in the ways of international telecoms as Telenor would not have started on this journey if it did not believe it had a reasonable chance of success. However, it’s worth noting that the terms of the Thailand deal mirror those it agreed recently in Malaysia, and for various reasons that tie-up was some time coming and has yet to pass regulatory scrutiny.

Earlier this year, Telenor agreed to merge its Digi operation in Malaysia with Axiata Group's Celcom, a move that would – or possibly, will – create a new market leader. Again, we're talking a merger of equals, with each parent company set to take a 33.1% stake in Celcom Digi...which arguably works better as a brand than TrueMove H dtac, although we have yet to find out what the Thai entity would actually be called.

The Malaysia announcement came two years after Telenor and Axiata pulled the plug on a previous merger attempt, citing unspecified complexities, which may or may not have included potential regulatory issues. As it stands, the companies are going through the motions in Malaysia with a view to finalising the transaction in the second quarter of next year. (See Telenor, Axiata ink Malaysia merger, but regulatory process looms.)

We have yet to discover what the Malaysian Communications and Multimedia Commission (MCMC) makes of the proposal, which will have an impact on competition, given that it merges the country's second and third operators. There is a fourth player in Malaysia, and a host of small MVNOs and so forth, which will make some difference but will not fully offset the change. Similarly, Thailand will lose one of its big private players, but it also has state-owned operators CAT and TOT, and a number of virtual players, but between them they command less than 3% of the whole market. It's anyone's guess whether they will be deemed sufficiently powerful as to preserve competition.

When it comes to Telenor's group strategy, we are starting to see the emergence of a trend.

The telco combined its Asian operations into a single business unit in March last year under the leadership of Jørgen C. Arentz Rostrup. "With him at the helm in Asia, we will enable an even tighter focus on growth, modernisation, and new opportunities in the region," said Telenor's group CEO Sigve Brekke at the time.

We knew then that change was afoot in Asia, but it's now clearer which way the wind is blowing.

Telenor generated 53% of its revenue from the Telenor Asia operations when the business was first set up. Last year, Thailand, Malaysia, Bangladesh and Pakistan together contributed half of group revenues, the Myanmar unit having been classed as discontinued operations, ahead of Telenor handing over the troubled business to M1 Group in July.

These operations are a big part of Telenor group, so little wonder it is keen to build some scale and generate some synergies there. All it has to do now is get the regulators on side...but that will not be an easy task.