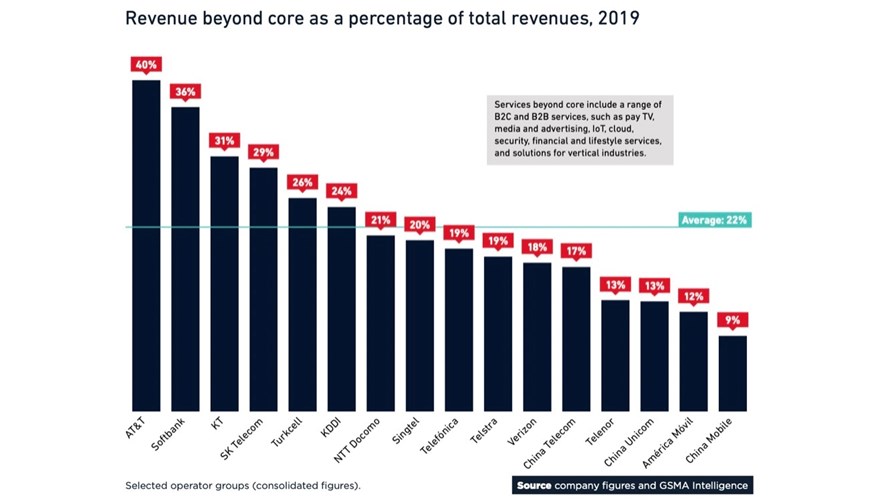 Telcos are growing the portion of their revenues that come from non-core communications services activities, with some generating up to 40% of annual sales from such offerings, according to a new report from the GSMA’s Intelligence unit.

In a wide-ranging and informative report, Global Mobile Trends 2021, which looks at many aspects of the telco services sector (including the impact of the Covid-19 pandemic), the GSMA Intelligence team tracked the percentage of revenues gleaned from “services beyond core.”

Those services cover a broad range of offerings, including some that might appear to be very ‘core’ these days – the GSMA team includes “a range of B2C and B2B services, such as pay TV, media and advertising, IoT, cloud, security, financial and lifestyle services, and solutions for vertical industries” in this category – but it still provides an interesting guide as to how operators are increasingly spreading their wings.

The team finds that “services beyond core” account for anywhere between 10% and 40% of total revenues, with the average at the “largest groups” coming in at just over 20%, up from 17% in 2017. Much of that growth is organic, according to the GSMA team, but of course some of it is accounted for by very major acquisitions, such as AT&T purchase of TimeWarner.

Perhaps not surprisingly, then, AT&T leads the way among major operators in the slice of sales from these non-core activities, with 40% of 2019 revenues, ahead of SoftBank with 36% and the South Korean duo of KT Corp. and SK Telecom on 31 and 29% respectively.

Singtel is worth calling out also as it has just announced its expansion into the world of banking services: It generated 20% of its total revenues from non-core activities in 2019. (See Singtel teams up with app provider Grab to serve the un- and under-banked.)

And there is growing evidence that telcos are keen to spread their nets ever wider -- SK Telecom’s tie-up with Amazon for physical deliveries and Telstra’s hint that it may seek to re-sell renewable energy services to its consumer customers are just two examples. (See Boxing clever: SK Telecom’s ‘differentiated’ online shop for Amazon products and What’s up with… Telstra, Deutsche Telekom, BT.)

This is a trend that is set to grow and expand further in 2021 and beyond and TelecomTV will be tracking such developments as they happen.

Find out more about the report in this press release: The report can be accessed in full here.