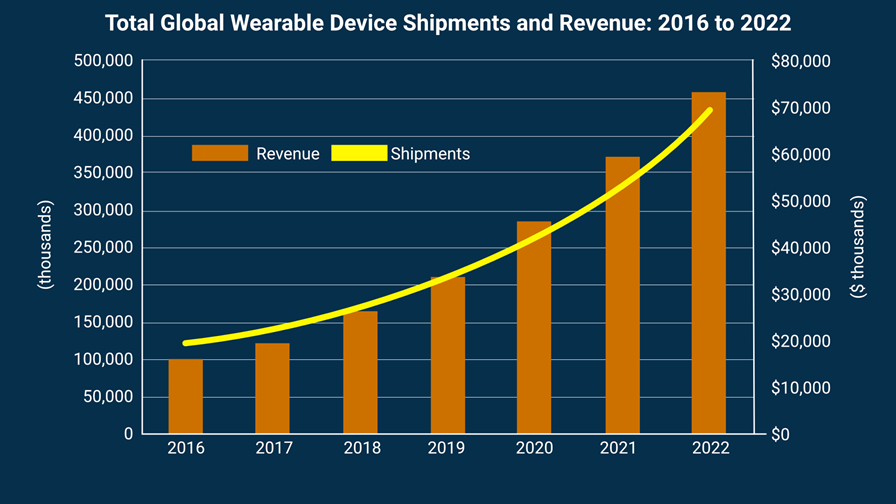 A new report from US-based research company Tractica finds that fitness trackers and smart watches remain “the flag bearers” of the wearable market, seeing growth but at a slower pace than estimated earlier. Meanwhile, other wearable device categories such as body sensors continue to show strong promise, driven largely by wearable patches used in healthcare applications. Tractica says it is these body sensors that are expected to drive much of the momentum in the overall wearables market.

The report forecasts that annual wearable device shipments will increase from 118 million units in 2016 to 430 million units by 2022, representing a compound annual growth rate of 24.1 per cent.  It also believes that, by the end of that period, smart watches will have become the largest wearable device category, followed closely by fitness trackers and body sensors. Other devices will also play a role in the growth of the market, including smart clothing, wearable cameras and smart glasses.

“Healthcare and health-focused applications in general will be a major driver for the next phase of growth in wearables,” said Aditya Kaul, Research Director at Tractica. “Wearable device companies that pivot beyond fitness and activity tracking, toward preventing and managing chronic health conditions like diabetes and heart problems will succeed in the long run.”

It’s getting tougher for fitness-orientated wearable companies to succeed. Jawbone is in liquidation, Pebble has been acquired by Fitbit, and Fitbit itself has seen revenue sink by 40 per cent in recent quarters. It looks certain that there will be continued consolidation as smart watches – especially the Apple Watch – catch up with fitness trackers in terms of volumes. Then there’s the issue of market saturation; we don’t know for sure when, but it is highly likely that the market for fitness enthusiasts and more casual users will start to level off at some point.

Nevertheless, Tractica estimates that fitness trackers and smart watches will remain the largest device segments for wearables, accounting for more than 80 per cent of shipments in 2016, with their share projected to go down to 50 per cent by 2022. Body sensors are expected to be the third largest wearable device segment by 2022.

Tractica believes that chronic health management, both in a professional healthcare setting, as well as a general consumer setting, will help wearables break into the mainstream. It says that wearable device companies that pivot beyond fitness and activity tracking, toward preventing and managing chronic health conditions like diabetes and heart problems will succeed in the long run.