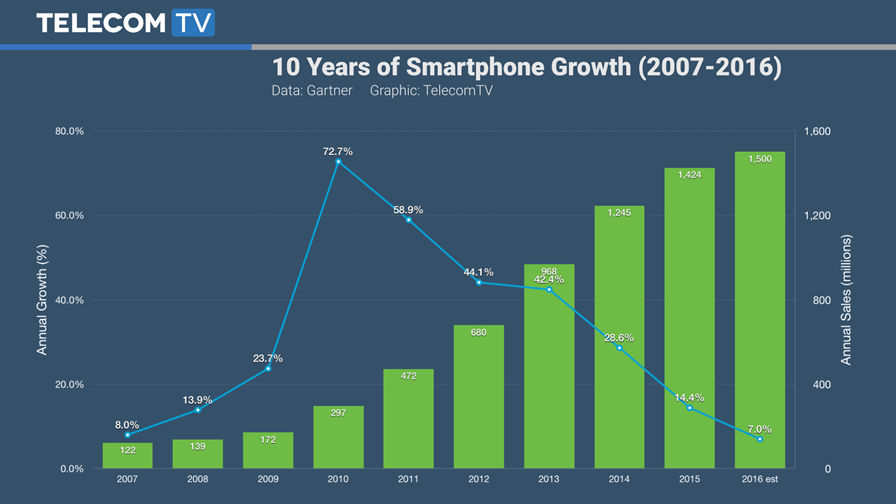 As can be seen from the above graphic, created using data from historic press releases from Gartner, the heady days of explosive sales are over, but nevertheless, the market is still growing. If indeed we see 1.9 billion devices by the turn of the next decade, then that will represent steady, if unspectacular, continuous growth. It’s all a far cry from those halcyon days of 2010 when annual sales growth was a stratospheric 72 per cent.

"The smartphone market will no longer grow at the levels it has reached over the last seven years," said Roberta Cozza, research director at Gartner. "Today, the smartphone market has reached 90 per cent penetration in the mature markets of North America, Western Europe, Japan and Mature Asia/Pacific, slowing future growth. Furthermore, users in these regions are not replacing or upgrading their smartphone as often as in previous years.”

In the mature markets, premium phone users are extending life cycles to around two and a half years, which is unlikely to change drastically over the next five years. In emerging markets, the average lifetime of premium phones is between 2.2 and 2.5 years, while basic phones have an average lifetime of three years and more. No surprise that the recent rumours suggest Apple is changing its “major upgrade” cycle from two years to three years. There is also little sign that the new telco finance programmes and vendor upgrade programmes are persuading users to step up to the latest model every year.

“Most users are happy to hold onto their phone for two years or longer than before,” said Ms. Cozza. “They do so especially as the technology updates have become incremental rather than exponential.”

So where will future growth come from? There’s still mileage in the upgrade from feature phone to smartphone in some parts of the world, and in 2015 sales of smartphones overtook those of feature phones for the first time in Sub-Saharan Africa. However, China is no longer the most attractive new market, as India now has that accolade. After recording growth of 16 per cent in 2014, sales of smartphones in China were flat in 2015.

"In this saturated yet highly competitive smartphone market, there is little growth expected in China in the next five years," said Annette Zimmermann, research director at Gartner. “Sales of smartphones in China represented 95 per cent of total mobile phone sales in 2015. Similar to India, falling average selling prices (ASPs) for smartphones will make them more affordable for users." She adds that India has the highest growth potential: “Sales of feature phones totalled 167 million units in 2015 – 61 per cent of total mobile phone sales in India.”

Smartphones are expensive for users in India, but with the ASPs of low-end models falling, Gartner estimates that 139 million smartphones will be sold in India in 2016, growing 29.5 per cent year over year. ASPs of mobile phones in India remain under $70, and smartphones under $120 will continue to contribute around 50 percent of overall smartphone sales in 2016.

"The worldwide smartphone market remains complex and competitive for all mobile phone vendors, and we are not expecting the vendor landscape to get smaller," said Ms. Zimmermann. "In such a fluid vendor landscape, some will exit the market while newcomers, including mobile manufacturers or internet service providers from China and India, could make their debut."