Canadians urged to ‘Keep it in your pants’ 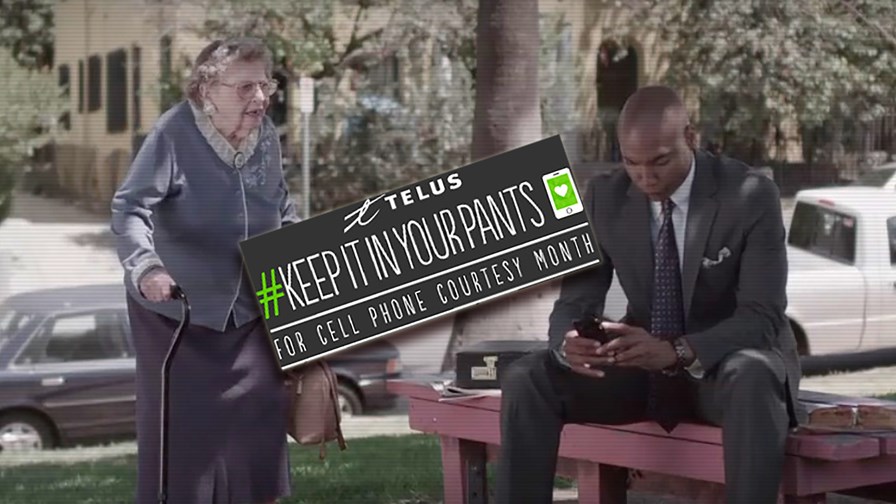 You can’t accuse Canadian telco Telus of not having a sense of humour. It has just launched a creative promotional campaign, ostensibly to improve mobile etiquette, but really it’s just an excuse to have a bit of fun. It’s also laced with more innuendo than a Benny Hill sketch, which is probably why it’s confined to north of the 49th parallel.

‘Keep it in your pants” is the message that Telus wants to convey during its Cellphone Courtesy Month, citing movie misadventures to first date disasters and everything inbetween – there’s a healthy collection of BuzzFeed style examples on its website.

But alongside the humour Telus has worked with Google Consumer Insights to put some numbers on Canadians’ views on smartphone etiquette. Highlights, including the most popular responses:

“Exercising restraint and showing good manners can go a long way,” said Anne-Marie LaBerge, VP of Brand and Marketing Communications at Telus. “There’s a right time and place for everything, even pulling out the beloved smartphone; and it appears our fellow Canadians agree that sometimes we’re better off keeping it in our pants.”

Yes well, all very amusing. But things are a little more restrained south of the border.

The Bank of America has just published its report on ‘Trends in Consumer Mobility’, based on a survey of US adults. Amongst its key findings were:

But of course, what Bank of America really wants to understand is mobile banking behaviours. It found that 31 per cent access mobile banking at least once a day, with 52 per cent at least once a week. Checking balances was the most frequently used function at 81 per cent, with transfers between accounts at 49 per cent and bill payment at 48 per cent. In total, 47 per cent of respondents said mobile or online was their primary method of banking.

However, there is much resistance to the idea of the mobile wallet. 60 per cent are not comfortable with the idea, with only 38 per cent in favour.